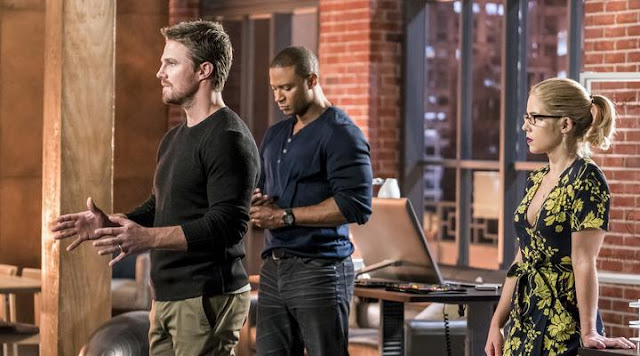 Written By: James Bamford
Directed By: Ben Sokolowski and Emilio Ortega Aldrich
First Aired: January 18, 2018
Welcome back from the Arrow mid-season break. When we last left the crew shit was in shambles. Ollie, Felicity and Digs breached trust with Rene, Dinah and Curtis, causing a massive fissure in the crew.  They ended up splitting and leaving only the core members of the team arrow, Ollie, Digs and Felicity, still in the mix.

Meanwhile Cayden "worst criminal mastermind name ever" James, played by the Michael "out for a paycheck" Emerson aka Ben Linus from Lost and the guy who built that Person of Interest computer on that CBS show my parents are always telling me about, has put together a team of Arrow-centric super villains and is poised to put Star City out of its misery once and for all.

Also, he has bugged the Arrow-cave.
If you want a full recap of the last episode, click here.

Caught up? Good let’s jump into the episode.

Arrow is getting really tough to watch folks. It has devolved into this brooding bullshit that is devoid of any humor or fun. Additionally they have managed to take what should be a villain of the week story line and stretch it out through an entire season.  This is like the 4th time in 6 seasons that someone is planning to destroy Star City. It is the like the 3rd time that Ollie's identity is fixing to be exposed by some self righteous member of law enforcement. It is probably the 2nd or 3rd time that a former ally feels slighted by Ollie and plans to ruin his life.  And it is the 100th time that I stopped giving even the slightest of fuck about these people.

Last night's episode was a return to this boring fucking formula of sucking the life out of my living room. Let's hit the beats.

1. Big bad Cayden James and his crew of misfit criminals shake down the local mob boss because they want control of the ports for some nefarious master plan that makes little to no sense.

2. Curtis is helping out the big three by giving Diggle some Luke Skywalker robot hand bullshit to cure his yips. Curtis thinks that playing nice with these assholes will get them to come around to seeing his point of view...it wont. During the session they realize that the Arrow-cave is bugged.

3. Someone is sad about some shit and some ancillary member of team Arrow tries to cheer them up before shitting all over them and making them feel worse than they did before.  In this case Thea, fresh out of her coma, tries to cheer up detective Lance but ends up shitting all over him for having conflicted feelings about wanting to connect with the doppelganger of his dead daughter.

4. I decide to get up and get something to drink in the kitchen, but since nothing of consequence is going to happen I don't bother pausing it.

5. Ollie does something morally questionable like making an alliance with a mobster to fight a common enemy, his specialty move which never backfires and makes shit even more difficult for the team.

6. Team member has feelings for someone who ends up being against the team. In this case Dinah and The Vigilante are getting nostalgic for that old loving.

7. Ollie's plan goes sideways and he realizes he just CAN'T do it alone.

8. Person who made other person feel bad in item 2 realizes they were wrong and makes said person feel good. CHARACTER DEVELOPMENT Y'ALL!!!!!!!

9. Team member mentioned in item number 6 realizes they are bring played and gets mad.  Rene and Curtis break the news that Vigilante is working with Cayden James...sorry I cannot get over how fucking bad that name is.  Cayden James sounds like the kind of dude that does folk covers of early Snoop Dogg songs on youtube because he thinks its cute funny for a waify blond trust fund kid to earnestly sing the N-Word.

9. Ollie tries to make amends to his crew, but is a ham fisted idiot and he does that thing where he opens his eyes really wide, offers a non-apology and lets everyone know that all parties share in the blame...they don't, Ollie is just a dick. Finally Rene, Dinah and Curtis told Ollie to fuck off which leads Felicity to show her true colors and react like a Sorority president who was just dissed by a pledge and is all "Who the fuck does does that freshman twat think she is". Felicity sucks.

10. Ollie stands by his poor decision making, Felicity backs him without question because as long as he isn't lying to her about having a son, he has carte blanche to do whatever shitty thing he wants to do, and John stands by him because Ollie has compromising photos or some shit.

11. Final scene, the villains do their Dr. Evil laugh.

See what I am saying?  The show is so formulaic, stupid and corny. These fucking assholes have been mailing it in for like 3 seasons now and yet I still watch week in and week out.  Maybe I am the problem, maybe I need to find better entertainment to watch while I fall asleep on the couch, play Madden on my phone or scroll through twitter looking for people to be outraged about.

Although, I did have a weird stoner moment* where I thought this whole thing might be an allegory for the 2016 election. Cadyen James and his crew represent the Trumps. Ollie and his crew represent Hillary, the somewhat less evil but compromised opponent. And Rene and them represent the Bernie contingent.  Cadyen James aka Trump uses ill gotten information to split team Arrow.  Ollie aka Hillary is to proud, arrogant or stupid to realize that he has been out played and doubles down on the stupid by pushing away a whole contingent of voters that would have helped put them over the top. Rene and them aka Bernie supporters are rightfully angry that they are being taken for granted, lied to and generally shitted upon by the powers that be, so they go off and form their own annoying thing that consists of bad podcasts and snarky tweets. Meanwhile Cayden James wins and we are all fucked.  I think what Arrow and I are saying is......Bernie would have won.

*I was sober as a judge and haven't smoked weed in a decade, it was just that the line of thinking is a stoner conspiracy rabbit hole