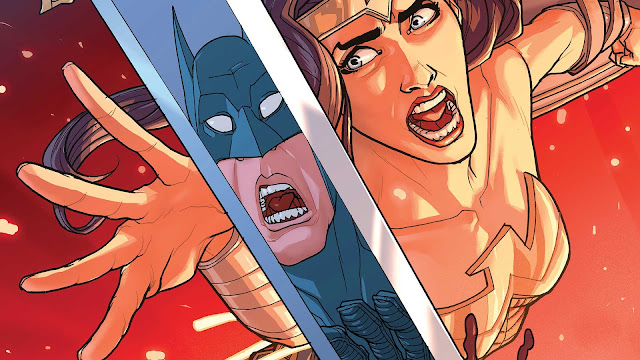 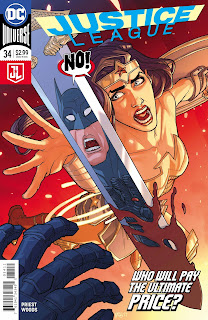 It's finally here...Priest's debut on Justice League!  Since Deathstroke is one of my favorite Rebirth books, I couldn't wait for this day.  Again, it's finally here!  I usually would go on and on about things here, but it's the start of a new run and seriously, I want to dive right in.  Is it good enough to be worth the wait?  Let's find out...


The issue opens up on the planet, Dione where we see an alien...and Simon!  Well, we eventually get to see this mysterious figure is Simon as he flies into Space...right into an Alien Invasion.  He does call Jess and I am happy to say, Priest has brought back the idea of the Rings being charged.  Call the other writers, no willpower spiking nonsense here!  At least not for now.

We then head to Earth and see the seeds of what this beginning story is going to be ab out.  An exhausted Bruce Wayne has to be put to bed by Alfred and even then, gets up right away, ready for business.  Business meaning Justice League business as he heads off to the Watchtower and takes control of the many situations going on here on Earth and beyond. 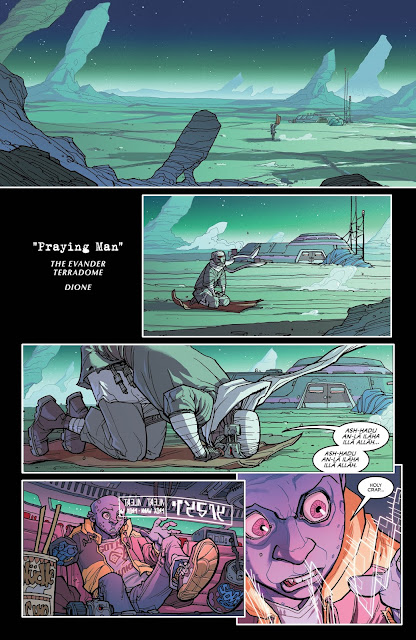 While I really like the idea of the Justice League putting out multiple fires and love seeing the coordination of the Team, I do have to get used to Priest's voices for the characters.  I'm not saying they are bad, because they are not...just a bit different.  However, it is awesome to get a Justice League book where everyone has something to do!

While Simon continues to deal with the Alien Invasion alone, the big story is Batman, Aquaman and Wonder Woman dealing with some terrorists.  The progression of this scene was pretty cool, seeing both the Justice League and the FBI converge on the bad guys is something you rarely see and it's all setup for what's to come...the idea of the Justice League not exactly saving the day.  Yea, things don't go exactly as planned and it's something you rarely see in this book.

The issue continues with Aquaman and Flash stopping a Tsunami and Superman, Jess and Cyborg joining Simon in Space.  It all ends with a false alarm and a big Batman moment...again, it's something you rarely see in this book, or any other for that matter. I liked this issue.  It was a bit different than what I was expecting and while I like my Justice League book to be filled with heroics and lots of group poses, this more down to Earth approach may be what is needed after the Bryan Hitch run.  Hitch was all about huge, Earth shattering threats with little to no consequences after they were taken care of (remember, only one person dies in the Kindred attack!), but those consequences make this story seem bigger.  Sure, I hope we still get big moments in this run, but as long as the little ones make sense, I'm all for them as well.

I like Pete Woods' art here as well.  Again, it's a bit more subtle and grounded than what we've been getting.  There isn't really a "wow" panel or page, just a whole issue of really good character designs and well laid out action scenes.  I will take that over a quick wow any day.

Priest starts his run of Justice League with a well plotted issue that is more about the setup than an in your face introduction.  If you're reading his Deathstroke run (you really should be), you know that he doesn't waste time and almost everything will return in due time.  That's exactly how this feels and that feeling makes it feel big beyond what is happening on the page at any given moment.  Pete Woods is a perfect compliment to Priest's storytelling and I am getting ready for a kick ass run.