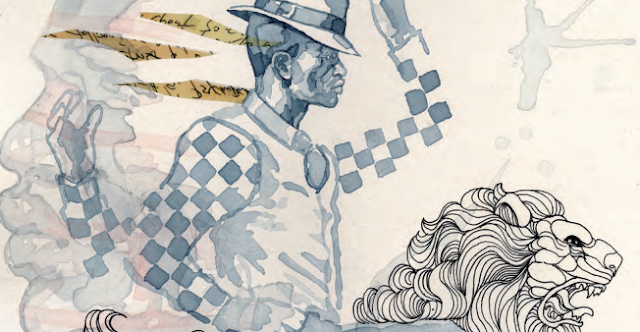 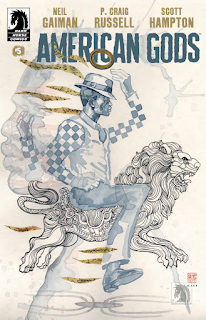 Dark Horse’s American Gods has, after an initially underwhelming start, become a comic to which I rather look forward each month. This adaptation has been very much a slow burn up to now, but there are deepening mysteries beginning to unfold and characters being introduced who are quirky and distinctive enough to hold the attention even while the questions swirl around the reader’s head. In this issue, Shadow’s journey down the rabbit hole continues apace and shows no sign of letting up. Step into the madness…


One of the less noticeable but nonetheless interesting things about this comic adaptation of arguably Neil Gaiman’s most famous novel is that it offers very few concessions to the new reader. Sure, there’s a prose recap of sorts on the credits page, but it’s short on detail and readers looking to find, for example, just what Zorya ‘The Midnight Sister’ Polunochnaya’s advice to Shadow was will have to find that information elsewhere because it’s not presented here. For the returning reader, this is not a problem, of course, and it’s safe to say that the series will read very well – pretty much seamlessly, in fact – in trade.

This issue starts with Wednesday and Shadow saying farewell to the Zorya sisters (although only one of them, Zorya Utrennyaya, is actually up to see them off). As they leave, Shadow plays with the coin that Zorya Polunochnaya had given him the night before in an effort to familiarise himself with it. Unaccustomed to its weight, he drops it and receives a mild scolding from Wednesday. Clearly the coin is going to be important at some point. But not this issue, which sees Wednesday and Shadow rob a bank in a pretty ingenious and also rather simple way. I’m not going to spoil the details of the plan for you, but suffice it to say that it is not only entertaining but also gives us an insight into not only Wednesday’s powers but also Shadow’s ability to adapt to the different situations in which he finds himself. 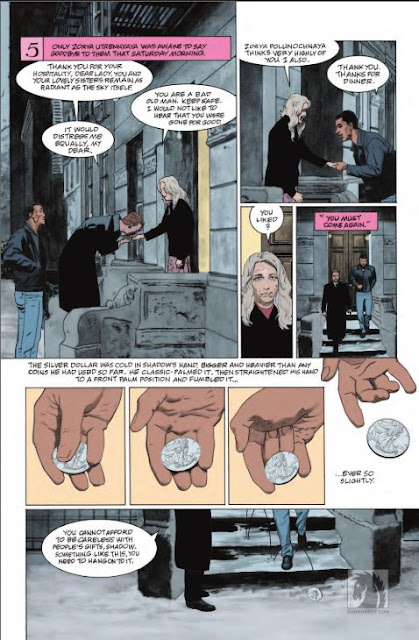 The second half of the issue deals with Wednesday’s recruitment drive, the reason for the robbery in the first place. This section takes place in The House on The Rock, a real-life location in Wisconsin, open to the public, in which each room is architecturally distinct. The creative team take full advantage of this locale, using it as an opportunity to unsettle and intrigue the reader. It is easy to see Shadow’s journey into the inner rooms of the house as symbolic of his wider journey into the world of gods and bargains and, put bluntly, incredibly weird stuff.

Hampton’s art comes into play here. I’m beginning to think that he’s an inspired choice for this book. As I’ve said before, his reserved art style makes the story’s shifts into the fantastic both grounded and rather effective. This is evident as Shadow and Wednesday make their way through the house to the Mikado room, “a nineteenth-century pseudo-oriental nightmare in which mechanical drummers banged cymbals and drums” and ornately decorated light shades seem to hang spectrally in the air. The depiction manages to be both tawdry and eerie at the same time.

Shadow ends up having an interesting conversation with Czernobog and Mister Nancy, presumably the modern incarnation of the African god Anansi. As is common with Gaiman, while seemingly ordinary, even banal, subjects are discussed on the surface, undercurrents that appear to be potentially dangerous swirl around the three characters’ conversation. Shadow, however, seems to be navigating them well enough, although the sense that he’s getting himself in deeper and deeper is palpable. 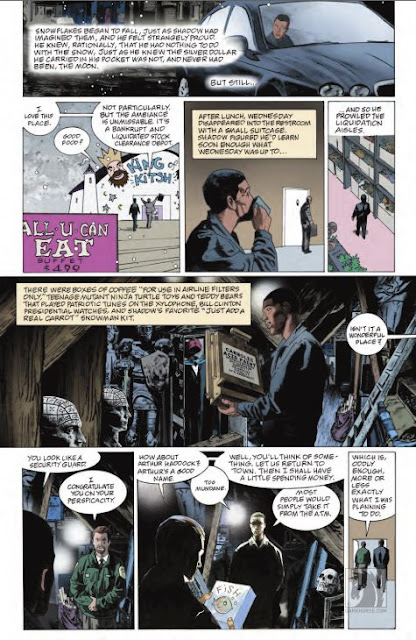 Arguably, the centre piece of the issue is the carousel – a huge procession of creatures, both mythical and mundane, lit by thousands of glittering light bulbs. And Hampton’s artwork depicts its otherworldly majesty beautifully, his use of perspective making the most of Russell’s layouts as Shadow rides his eagle-tiger and experiences a moment of child-like euphoria.

And then the issue ends in the most anti-climactic way imaginable. So anti-climactic, in fact, that it’s cost this issue a full point in its score. The line “Then the lights went out and Shadow saw the gods” positively demands that the reader turn over the page. Finding that the issue has ended at that point, without much more than a numinous glow to suggest the presence of the divine, is one of the most disappointing experiences I’ve ever had with a comic book. I suppose, in some respects, that I was so disappointed is an indication of how good the rest of the book was, but even so…

The premature ending notwithstanding, this is an extremely enjoyable issue. There’s no back up this time round and I’m inclined to say that the book benefits from having a little longer to tell its involving but nevertheless leisurely-paced story. After five issues, Wednesday’s plan is becoming somewhat clearer and his world richer, weirder and increasingly unsettling. Expanding on his rather taciturn portrayal in the first couple of issues, Shadow is becoming ever more likable. In short, this story continues to smoulder, but there are promising signs that it’s about to catch alight.

This post first appeared on Weird Science DC Comics, please read the originial post: here
People also like
A Furry’s Guide to Cryptocurrency
What You Should Know About Inbound Marketing
Not fade away: the joy of a ghost-sign spotting walk
Bed Bug Size
11 Ways to Use Content Marketing in Every Stage of the Sales Funnel
How to Choose the Right Wedding Dress