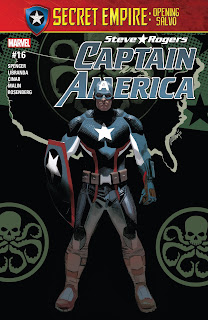 BuzzFeed Editor, Lara Parker, Uses Ca…
Africa to be the “Game Changer” of th…
Content is King and a Multilingual Bl…
Bigfoot Mystery Solved
The Ultimate Winter Bucket List Accor…
The Following Review May Contain Spoilers for US Avengers #5 and Thunderbolts #12

The opening shots have been fired, ladies and gentlemen welcome to Secret Empire. This event has piqued my interest, which lead me to begin reviewing this comic. While the general consensuses for this Book is decent, I have found myself thoroughly enjoying this title. Now since I have been looking forward to this event I read all four books pertaining to Secret Empire: US Avengers #5, Thunderbolts #12, Captain America Steve Rogers #16 and Secret Empire #0. It is time to see how this plan our Hydra Hailing Captain will turn out, Lets Go!
We start this book with the flashback sections that I have grown to love, however the mood in this book is gloom, Hydra has fallen apart thanks to Red Skull and it has Steve questioning how he can continue fighting for a cause that no longer resembles what it use to. Which seems to be the way this book is going to go because as we bring ourselves back to the present Maria Hill, Ex-Director of S.H.I.E.L.D. Has found what Black Ant and Taskmaster were trying to extort her for last issue: the video of Captain America proclaiming his allegiance to Hydra. Of course, as soon as she discovers it Hydra agents come busting in to take her out. The next section of the book has to do with Helmut AKA Baron Zemo, trying to capture Kobik from the Thunderbolts team all war broke loose and villains proved that their allegiances are iffy at best, but Kobik shattered sending her cosmic cube shards all around the arctic. Trying to rebuild the cube he has Doctor Selvig and Fixer trying to locate the shards, with one left to find Moonstone and Atlas out there trying to find it. On an upside, if you are liking the villains getting a win, it looks promising that Helmut will get his revenge on Bucky Barnes for killing his father. 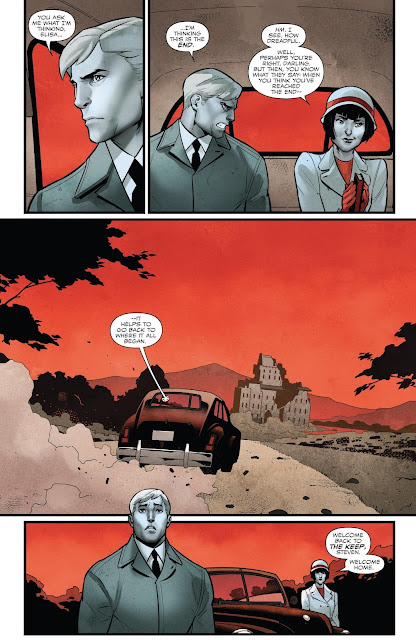 With our second flash back of the book we have a touching moment, after spending years believing that Elisa had his mother killed, it turns out she was still alive and has now been reunited with Steve. Back to the present, with no one going to believe her Maria Hill has to figure out who to tell about what she found, her solution: Rick Jones. Meanwhile, Atlas and Moonstone have found the last shard of the cosmic cube, but Doctor Selvig doesn't want any harm to come to Kobik, who he has grown to love, so he decides to take matters into his own hands and steals the shards currently on hand. It seems Helmut needs to do the basic villain thing, gloat to Bucky, who is strapped to a bomb, before he kills him. He recreated the lab where Bucky killed Helmut's father, but it seems Bucky isn't accepting the truth that Kobik showed him, but I final goodbye from Captain America pushed him over the edge and Bucky screams That's not Steve over and over as his death takes flight. 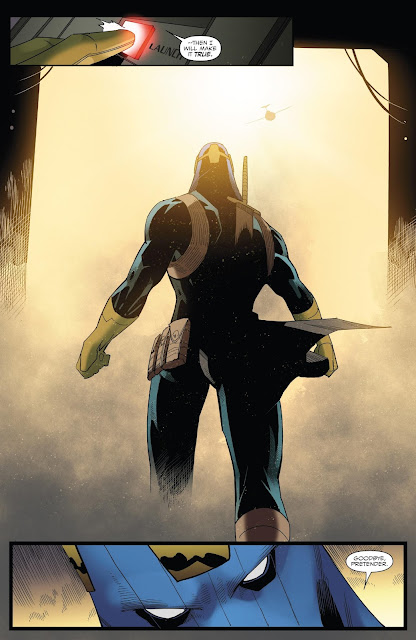 The final flashback sequence of this book we have Elisa telling Steve about his next mission, to restore the glory of Hydra, first he is to release Helmut, next find The Kraken. Now, for the first time this issue, outside of flashback, we see Steve Rogers as we are back to the current time with Him and Madame Hydra embracing. She introduces him to the new Hydra High Council, when Taskmaster comes out to let him know about the Maria Hill situation. As she is explaining to Rick that Steve is Hydra, Steve reaches out to Rick, and he puts Maria on hold (which left me laughing). The way that Cap explains to Rick that Maria is just out to get her old position back and she would do or say anything to do so convinces him, but as a safety measure Black Ant knocks him out. Now it is time for Cap to address his people, but with him not ready to show the face of Captain America as Supreme Leader of Hydra it is just a blank face going out to the masses. The final pages show members of hydra doing whatever it takes to kill the shield protecting earth from the alien attack.
Bits and Pieces:
If you are only reading this book because of Secret Empire I would recommend that you read the four books in order to get the full effect and I would highly recommenced reading them all. While I have only heard bad things about this book I find myself enjoying every minute of it and the art is a perfect compliment to this story.
7.5/10