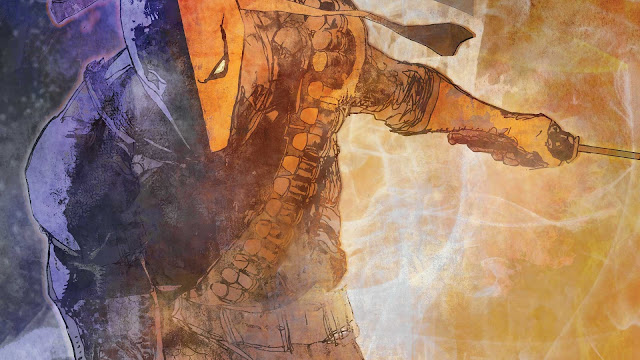 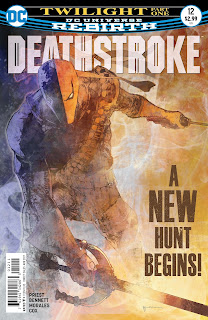 I have spent most of my time with this book defending my reviews.  It seems that no matter what I think of an issue, there are people who feel differently and really want to tell me.  I love hearing from people, but I hate getting yelled at, but I guess that's my lot in life.  Oh well, I will continue reading and reviewing this book and I just want all you fans of Slade Wilson to know, I want to love this book!  I really do.  So, is this the issue that gets me back on the wagon and in everyone's good graces?  Let's find out...


The issue opens with Slade making a decision on what will happen to Luis.  Basically, he will live until he tries to kill Deathstroke...then he will die.  The decision and the reasons behind it are pretty simple, but the scene ends with a shocker...Slade is blind!

We than go back in time to see Red Lion breaking Slade out of prison and I have to admit, he is growing on me.  Maybe it's because he is basically Black Panther (but red!) or the way he says "wheelons", but I hope he sticks around.  As for Slade, the scene ends with him heading off to deal with the "Chicago Deathstroke" from last issue.  Remember, "Better Aim". 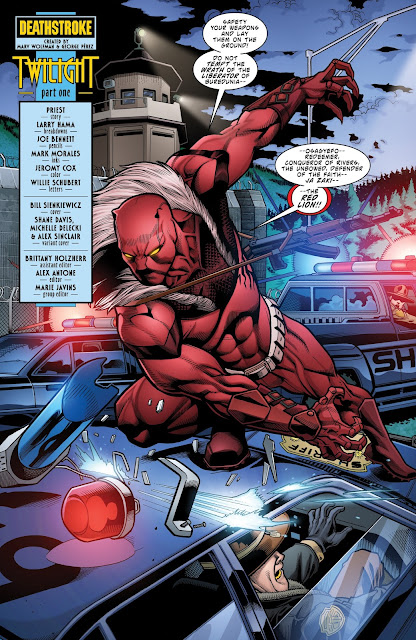 Back in Minneapolis, we get a little gangsta talk, but also a great scene with Rose and Hosun.  Yep, Hosun.  Seems that with Deathstroke out of prison he is fearing for his life and has gone to Rose for help.  While his plan is ridiculous, we get some really great information...all of which is new to Rose.  It also all leads to Adeline which is pretty juicy stuff!

It's a family reunion as we head off to see Jericho and after a scene similar to an earlier one with Rose and Richard (Luis), we get a little idea of what may be causing his migraines.  It's a little more psychological than physical.

Slade than visits Dex, the Supermax warden, and gets some information about who Red Lion is also helping...Raptor.  If you are a Nightwing reader, you will know all bout him.  The best part of this scene was seeing how Slade has set up his future freedom, if not riches. 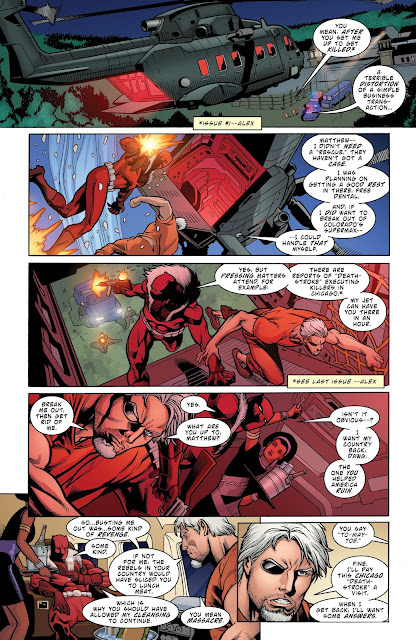 We continue with a bar scene that introduces Raptor to new readers and may just confuse older ones.  It leads to a confrontation with him and Deathstroke and it's all about clothing.  The book ends with me wondering if the clothes make the man or vice versa...I guess we will have to wait for two weeks to find out.

Overall, I liked this issue...up until the ending.  The stuff with Rose and Jericho was great and I loved the scene with Dex and Slade.  I even liked the parts that tie Slade into the last issue, but I really wonder why Raptor is here at all.  I wasn't a fan of him in Nightwing and nothing has changed...yet.  Maybe Christopher Priest will change my mind next issue.

This was a good issue of Deathstroke up until the forced cliffhanger.  I don't mind guest stars showing up in books, but Raptor is far from a star and just felt tacked on.  Other than that, however, the story fleshed out the Wilson family and the art was really good.  This is the type of issue I can get behind.
7.5/10

This post first appeared on Weird Science DC Comics, please read the originial post: here
People also like
Ancient Gods: History of the World
Chris Rock's Mom Breaks Silence on Will Smith Slapping Her Son: He Slapped All of Us, Especially Me
How And Where to Buy Shiba Inu Coin in Australia in 2022
Testosterone & Beard: 8 Easy Ways to Boost Growth
Never again will I destroy all living creatures. Until …
Bonsai Boy Of New York – Bonsai tree: The perfect gift