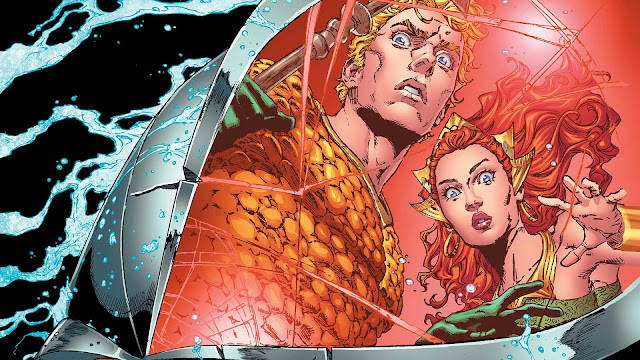 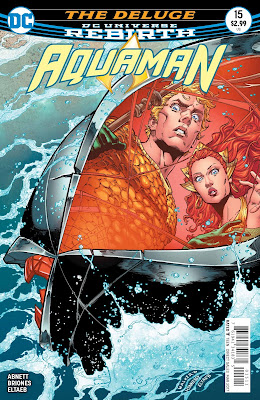 Coach Depression sent in the play, wh…
Cryptoqueen Vanishes Leaving A Pitch …
5 Ways To Share Your Skills With Othe…
Philip La Bossiere Interior Designer
BRIEF BUT SPECTACULAR - Photographer …
On Sale Date: January 18, 2017
**NON SPOILERS AND SCORE AT THE BOTTOM**
Here we areat the final act of “the Deluge,” and before I jump into my review, I want to say from the outset that I really liked how this arc was paced. It began with a two-part story where Aquaman fought Shaggy Man, then another two-parter disguised as two one-shots all about Mera getting up to speed, and then four issues of “the Deluge,” which has been an enjoyable (if sometimes silly) tale of big action and light intrigue and maybe more than a few characters whose names I will never remember but I liked how it moved along, is my point. I mean, this arc, all told, was eight issues—one issue longer than the opening arc that I groaned was a bloated rip-off—but it doesn’t feel like I’ve been slogging along in place the whole time. So hats off to the creative and editorial team at Aquaman, the last eight issues have been engaging and consistent, and if more of my comics followed this formula I’d be happier for it. So without further ado, I submit my review for the final part in “The Deluge,” Aquaman #15!
Explain It!
I did like this issue, overall. I feel I need to get that out of the way because the rest of what I write may sound like I didn’t like this issue. That’s sort of been par for the course during this entire “Deluge” thing; I pick apart each issue inanity and silliness and then end up saying I had a fun time reading it. And this was something like that, except it lacked in silliness. Last issue ended with Aquaman finding N.E.M.O. and about to pounce on Black Manta, the current leader of that clandestine organization, with righteous fury. This one pretty much picks up from there, and the whole thing is narrated by Aquaman in the past tense. On about the third page you realize that we’re looking at a flashback, a conflict whose conclusion is a fait accompli, and that sort of knocks the excitement down a peg. I mean, not like I thought Aquaman was going to die, but from the way he’s talking about N.E.M.O. and their plot to take over the world, it’s clear that he won this conflict and is briefing someone on what happened. 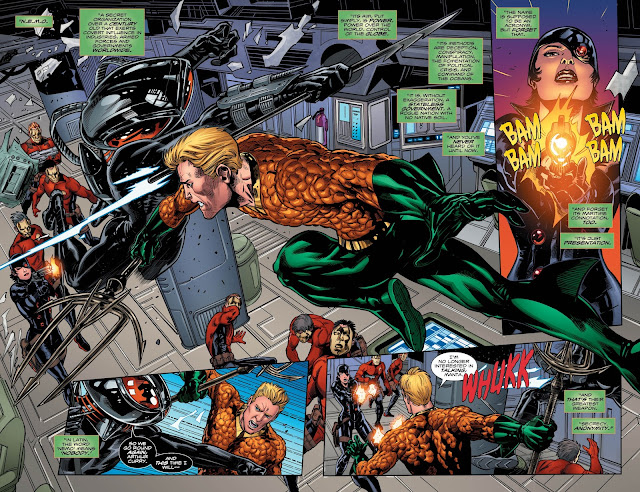 And “win” he does, when Black Manta presses the “self destruct” button that fairly well demolishes the secret base (save for Red Jack, who is seen disheveled, crawling up on shore and looking vengeful as heck) and hurts Aquaman not one bit. Turns out he’s currently hanging out with Superman in the Oval Office, addressing the President (the real president, too, which I hate) and explaining that he could justifiably kill him because the U.S. sent the covert Aquamarines squad to assassinate Atlantis’ king (i.e. Aquaman)—but he won’t, because he’s a swell guy. Instead, he surrenders, and then they hold a joint press conference and all is well. Superman gives Aquaman a new Justice League teleporter card, because Arthur used it to dispense of Shaggy Man several issues ago. But we knew this would happen eventually, so there it is. 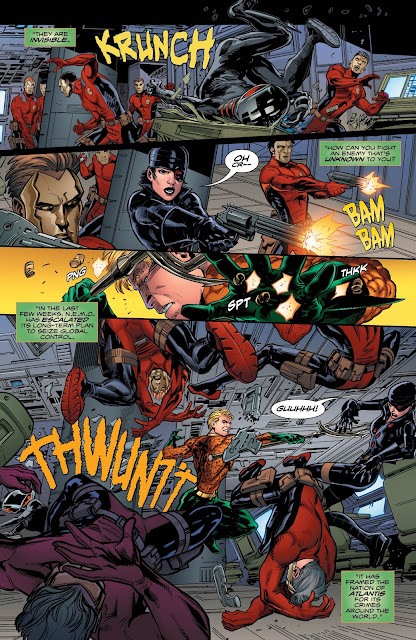 There is a lot to like about this issue. The artwork, for one thing, is dynamic, particularly in the first half of the book. Watching Black Manta get his smug stupid face caved in while Aquaman gives him a dressing-down was cool, too. And despite the appearance of the actual U.S. President, I did like the way Arthur handled himself. But for the conclusion to a four-part series about a fake war, it fell a little flat. No big demonstrative thing, no last-minute Hail Mary play that saves the day, just Aquaman crushing Black Manta’s stupid helmet and then becoming pals with America all over again. As an arc—and I’d include the four issues prior to the start of “the Deluge,” as they will doubtlessly be collected in a trade paperback—it was a good bit of reliable fun that should entertain any Justice League or Aquaman fan. I’d probably give the whole arc a 7.5/10. 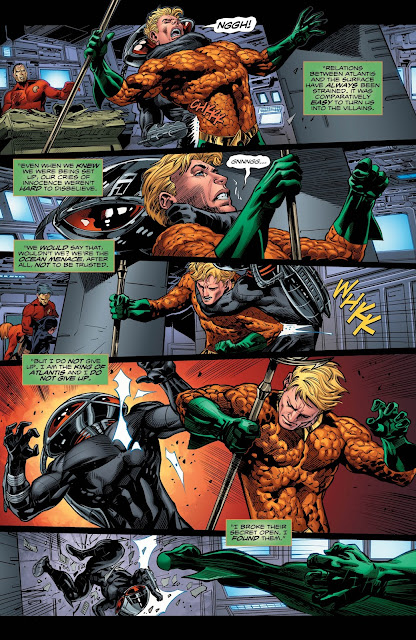 Bits and Pieces:
"The Deluge" comes to a satisfying, if not altogether entertaining, conclusion. Despite my relatively low score, I would say that this story arc that picked up from issue #8 has been a dependably fun time, and I would recommend it to a fan of Arthur Curry or even someone looking for a casual beach read.
6.5/10