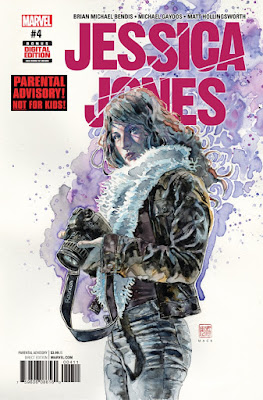 Written By: Brian Michael Bendis
Art By: Michael Gaydos, Matt Hollingsworth
Cover Price: $3.99
Release Date: January 11, 2016
Publisher: Marvel
*Non Spoilers and Score At The Bottom*
Jessica Jones really picked up for me next issue and really paid off the slower aspects of the first two issues. I am beginning to wonder what role this comic would play in the greater continuity due to the fact that Jessica is much different in the Power Man and Iron Fist book and she will be playing a role in the upcoming Defenders comic. So I am hoping to get a better idea behind these questions as this series goes on but the question is whether this issue will do as well as the previous one or return to the monotony of the first couple of issues. Let’s just jump right in and find out.

We begin with Luke Cage who is sitting on some stairs when Misty Knight shows up and confronts him. He told her that he wouldn’t go after Jessica but a photographer had seen him ripping the car door off of Jessica’s car and now the images are going through the news cycle. Misty tries to plead with Luke Cage but he seems to believe that something else is going on. Misty goes to say some pretty spiteful things about Jessica saying that Luke’s marriage is over and Jessica was never built to have that kind of life. The scene ends with Misty telling him that things were always going to end this way but he still disagrees. The two share an embrace but once again a photographer is hiding down the street and snaps a picture of the two. 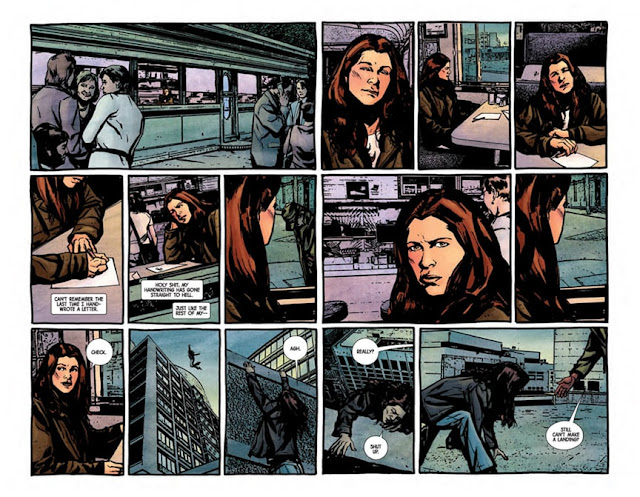 Meanwhile we catch back up with Jessica who notices that she has a tail after her meeting with Alison. She quickly begins leaping to lose her tail and she climbs to the top of a building where a figure meets her. The figure is none other than Captain Marvel. The two walk into a small apartment that seems to be hidden very well and off the books. Jessica tells Carol that she is probably being followed and that whoever this group is has contacted her. The group is anti-superhero and apparently they can tie some deaths to this organization. During this conversation it is revealed that Captain Marvel is the one that put Jessica in prison and they did it so that Jessica would be targeted by this group as a potential asset. Carol thanks Jessica for all that she is doing to help them catch these guys.
The two continue to exchange information on the group when Jessica drops the name Alison and that Carol had apparently interrogated her. We learn the woman is Alison Greene and that Carol had intel that she was a Hydra accountant but she turned out clean. After relaying all the information, Carol gives Jessica a chance to bow out of the operation but considering the deaths, Jessica refuses and plans to continue. Jessica then makes a trip to the police station to meet the homicide detective. The two talk and although the detective was originally skeptical of her running away from him, he came to the conclusion that it was because Luke Cage was with him. Considering the news that is circulation around Luke Cage, the detective wonders if Jessica has been having some issues at home and Jessica simply tells him that Luke would never hurt her like that. We get a glimpse of the latest news cycle and it makes it look like Luke is cheating on Jessica. After convincing the detective that nothing bad is happening with Luke he decides to show her to the husband of her murdered client. He has been asking to see her. This is where the issue leaves us. 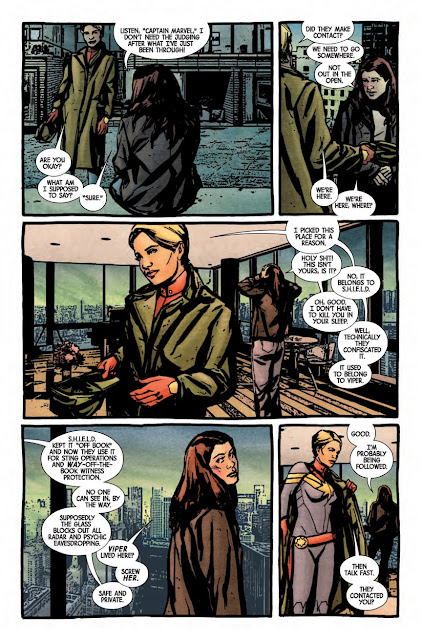 This issue hits us with a lot of information and it seems to be answering almost every lingering question that I had while still giving me new questions about where the story is going from here. Honestly, this issue is nearly perfect for me. This issue was so good that it has even risen the value of the other issues in this series so far. Honestly, if I went back and read those issues, knowing what I know now, I think I would give them much better scores than I did before. This series is really interesting and gives us not only Jessica’s perspective but also the perspective of the other people in her life who don’t know what she’s up to. Luke continue to believe in her even though he doesn’t understand while a character like Misty sees what she is doing and it confirms all her thoughts that she had kept to herself up until now. I love this series now. It’s so damn good.
Bits and Pieces
This issue of Jessica Jones isn’t just good, it’s so good that it makes all the issue that came before it even better. This issue is satisfying and so real I cannot praise it enough. When it comes to stories like this, I tend to know what I like and I wasn’t getting that in the first couple of issues but now I’m going to have to rethink everything I thought before because this issue was such an enormous pay off.