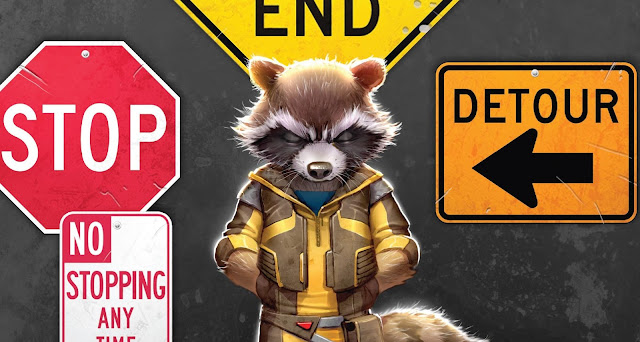 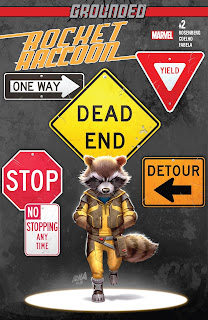 I liked the first Rocket book because I like Rocket.  Matthew Rosenberg did a good job of putting his voice on the page and it was fun just to see Rocket being Rocket.  Of course, he wants to get the hell off of Earth and that's pretty much the story here...Rocket tries to get off Earth and death, destruction and hilarity ensues.  That's good enough for me!  So, does this issue continue the madness?  Let's find out...


The issue opens up with a bang...and a slice and Rocket shooting a big ol' hole in the guy who ruined his best chance to get off of Earth.  This only leads to the NYPD getting even more angry at Rocket, but he manages to get away by hailing/carjacking/whatever a cab.

The best thing about Rocket is his extreme arrogance, but also his nativity when it comes to anyone not Rocket.  He thinks that everyone should know what he needs to know and that starts here with the cab driver and continues when he goes to the Bar Alone to find out where Ra'Chaun is. 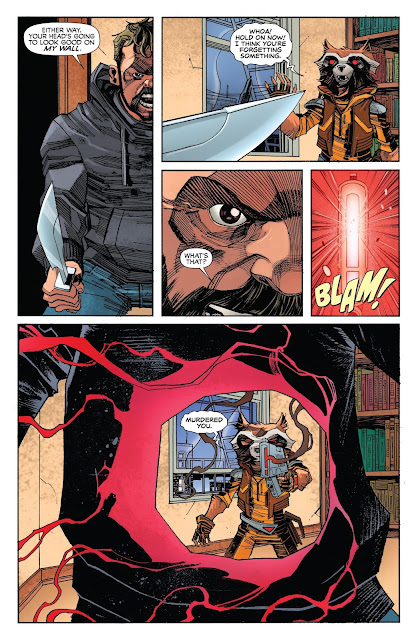 By the way, the Bar Alone is a bar that puts the Mos Eisley Cantina to shame and seeing the crazy aliens was fun, but it also results in a lead...kind of.  An alien named Jack Beagle has some information, but not all of it's good.

This all leads to Rocket getting the stuffing kicked out of him by the other aliens from the Bar until he is saved by...Spider-Man!  Yep, Miles Morales shows up and helps Rocket and the two of them are comedy gold.  Matthew Rosenberg has skirted some 4th wall stuff already in issue #1 and again, he sets his sites on the ridiculous parts of the Marvel Universe.  This time it's all about the amount of Spider-Man (Spider-Men?) and women there are right now.  The issue ends with Rocket heading off to find Jack Beagle, but it looks like he will have some other affairs to take care of before he eventually finds Ra'Chaun. 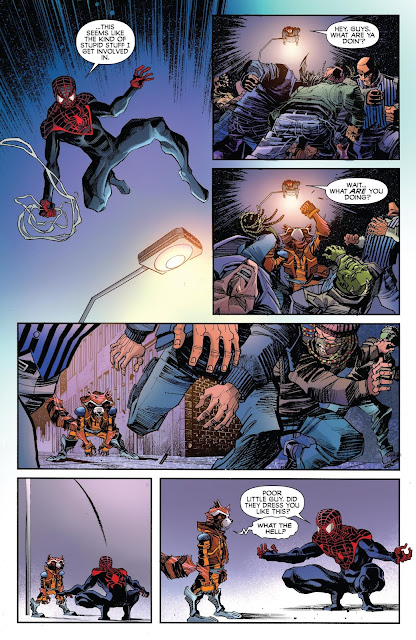 It is so fun to read this book just to see what Rocket will do next...and who he will do it with.  Rocket himself is so much fun and seeing him interact with some Marvel big hitters is even better.  Matthew Rosenberg is giving fans a funny book indeed.

Jorge Coelho and the rest of the art team is nailing it as well.  This book looks great and the art lends itself to the humor so well.

Rocket Racoon is a funny character and Matthew Rosenberg is sitting back and letting him just be Rocket.  That's a good thing because just seeing him interact with everyday people (and aliens) and other Marvel characters is great.  The art and story do a good job of presenting the crazy whack funky world of Rocket and I like it.

Some Useful Links for You to Get Started