Doctor Strange and the Sorcerers Supreme #4 Review and **SPOILERS** 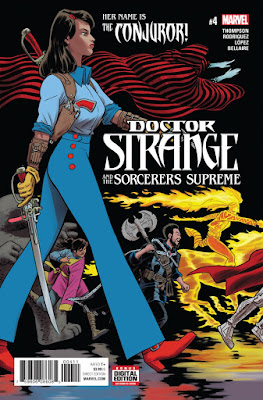 Traffic Wardens reject new uniform ba…
What Marathon Running and Successful …
The East winds of Digital Currency Ga…
Portable Oxygen Concentrator – A Boon…
Best Story-Rich Games on PC: November…
Cover Price:$3.99
On Sale Date: January 11, 2017
**NON SPOILERS AND SCORE AT THE BOTTOM**
If Diana Ross was on the team, could they be called the Sorcerers Supremes?
Check out my review of Doctor Strange and the Sorcerers Supreme #4,right here!

Explain It!
Continuing the saga of How I Met Your Merlin, we officially meet the Conjuror, the bad-ass woman with two magic guns that’s been pretty tight-lipped during this series. In fact, I don’t think I knew her name, though it’s possible I might have seen someone calling her “Conjuror” and thought it was like the way a magician expresses their affinity with someone else, like “bro” or “holmes.” “Good looking out, conjuror, I needed help moving my altar.” I also mistakenly pegged her as a Western-style sorcerer from the 19th century, but it turns out she is Brazilian and from the 1950s, and also wields dual magic sabers that I didn’t notice earlier. Basically, she’s an incredible character, as we learn in the opening flashback when she dispenses with Merlin’s quartz rock monsters and draws a lethal bead on the venerable magician, then asks “where is my brother, Merlin?” Later in the book Merlin attempts to explain her brother’s whereabouts...but we’ll get there. 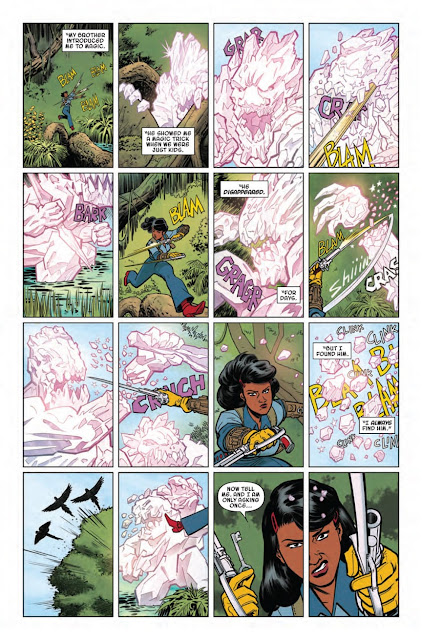 At Merlin’s spiritual garbage dump, where he’d been tossing mean magicians and monsters that threatened the safety of all reality, the Sorcerers Supreme descend into the depths to face the Forgotten, who came back to grab some clean underwear and check its answering machine. The Forgotten blow some fairy dust and explain how it came to be: originally scores of magical miscreants and malcontents from various points in time drawn to Merlin’s crib by a special book, they were locked away with a secret word, and eventually congealed into the four-armed freak-beast that creeps everyone out today. While the Forgotten seems preoccupied with some trinkets, Doctor Strange and the Conjuror crack open the monster prison so they can shove it back in again. But Newton and the Mindful One note something that no one else sees to have realized: the Forgotten said the secret word! 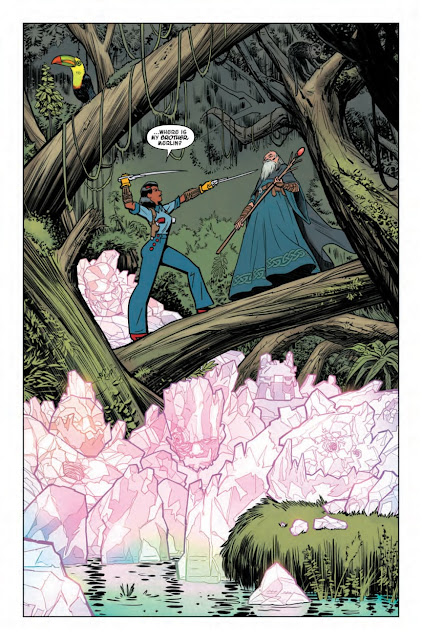 When the Sorcerers Supreme attempt a frontal attack on the Forgotten, it retaliates by attempting to swallow their souls—but Newton knows the magic word (“please,” if my mother was correct) and this causes the Forgotten to break back down in the various humanoid magicians that comprised it to begin with. Within those magicians is Joao, the Conjuror’s brother, obviously seduced by some magic not approved by Merlin and so locked away in his private and probably illegal dungeon. While the other Sorcerers Supreme survey the damage, Newton takes off his elaborate armor—and I love that he’s wearing just some long johns and black pants with suspenders underneath, then skewers one of the scattered corpses strewn about and withdraws a strangely unbloodied book from its body cavity. Newton explains that he’s used the word of God, and now he intends to become one. To that end, he knocks the Sorcerers Supreme for a loop with his staff, robs Kushala of her berserker fire power, then chops off Yao’s right arm so he can never become the Ancient One. And Newton doesn’t even break a sweat! Newton then locks them all in Merlin’s creepy boogums prison and toddles off with the Mindful One, probably to find opportunities for community service or otherwise act the Samaritan. 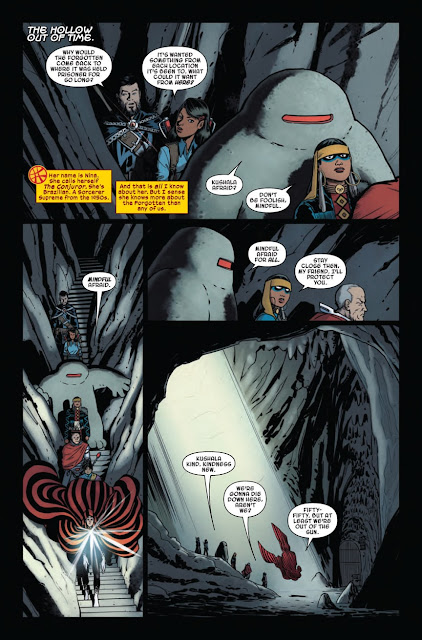 I’m enjoying this comic book as the story solidifies and we get to learn more about individual characters. The fact that they’re pretty much all cryptically-speaking weirdos, it’s sort of like an evening playing Dungeons & Dragons with your most nerdy friends. The art and plotting is very effective and curiously straightforward for a magic-based title, but somehow very fitting. This is more about team-based hijinks and monster-fighting than high-minded sorcery, I mean the Conjuror is wielding guns and sabers, for crying out loud. This book is a lot of fun, and if you’re steering clear because you grown at mentions of “the Hoary Host of Hoggoth,” then you can steer right towards it because this series has none of that.
Bits and Pieces:
This issue tells us a little more about another member of the Sorcerers Supreme, this time the Conjuror, whose character is still somewhat enigmatic but whose whole style and weaponry is terrific. When they're betrayed by one of their own, the Sorcerers find themselves on the metered end of poetic justice, and Doctor Strange wonders if he'll still have a future when this is all over! I imagine he will, I mean even if his powers are diminished, fortune tellers can make some pretty good tax-free coin in the right location.
8/10

Doctor Strange and the Sorcerers Supreme #4 Review and **SPOILERS**