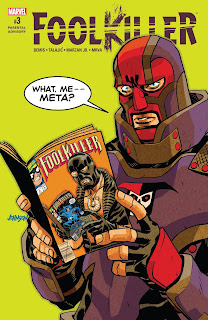 Besides a few one liners that were pretty funny, meeting the Foolkiller that replaced Greg and the ending, this book was a total let down. We now have 3 issues, where the first issue was the best, and all we have is setup for what is to come next. The worst part is that this setup is complete nonsense.

We start this story with poking fun at the 90’s change in what comedy was, for no reason what so ever. Next we find ourself at the mental hospital with our main character Greg drawing on the padded walls, when he is given a letter from the person he passed his Foolkiller mantel down to thanking him for passing it on.

Now finally on to current day, where we have a car crash. A man in a mask wants a sit down with Greg, so he wrecks with a man on a bike to get introduced into Garry, Greg’s S.H.I.E.L.D. handler, so he can get into therapy.

Now we meet Greg and Gary in a diner where Greg fills him in that he's been killing his patients, this next part made me start wondering what's really going on: 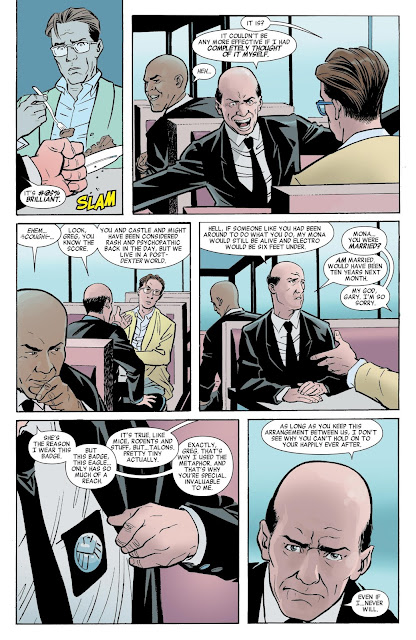 After the diner we move on to Greg’s office where he is having his session with our masked villain at the beginning of the issue, whose name is Kurt. Kurt starts kicking Greg’s ass when Greg reveals his arsenal. Throwing on his Foolkiller mask and grabbing a gun they have a stand off. In walks Gary, who we find out is no longer a member of S.H.I.E.L.D. And is using Greg to kill these people to pick up the Bounty on their heads. Book ends with Greg shooting Gary in the head.

This book was terrible, worst issue so far. Being issue 3 this score keeps dropping and the story has completely lost my interest. Only saving grace is the art which is good.