My heart will go on with an unforgettable love!

Chapter Fifty-Five
Against The Odds
“Do not be afraid nor dismayed because of this great multitude, for the battle is not yours, but God’s.”  (2 Chronicles 20:15 NKJV)
My Heart will go on with an unforgettable love!

Drama and beauty, hot sun and cool su…
Relais & Châteaux Weeshuis Gouda
My Biased Repp Sports Raze Energy Dri…
True Love is a never-ending story.
Going against the odds, I married my high school sweetheart who had been divorced for three years and raising his three boys. My friends told me I was crazy, and it wouldn’t last and don’t do it. I saw it as a second chance at love and was unwilling to give up my soul mate again.
My unique love story began in 1958 as a fifteen-year-old, falling in love with an eighteen-year-old. Though we went our separate ways, we magically became reacquainted in 1973 with a Phone call. Long distance was expensive, and the internet and cell towers were not available. With 450 miles between us, we had the hottest romance via letters since King Henry VIII and his mistress, Anne Boleyn.
Although it was a gamble, we took a leap of faith. Our confidence and love gave us the courage to take a journey we had not traveled before. The love in our hearts ran deep, and we had a new definition of passion added to our vocabularies.
There were no search engines in 1973, and it was a modern-day miracle we found each other with the distance between us. Thank goodness we had the aid of directory assistance for landline phones. In 2018, most people have changed to only having cell phones. With no access to a listing of cell numbers, it is almost impossible to locate someone.
A Google app would have allowed us to connect faster but would not have produced the hundreds of written love letters we wrote. With unlimited talk and text, we would have missed out on the beautiful art of writing —and receiving—love letters.
With today’s technology, the art of letter writing has all but disappeared, replaced by emails and text messages. For me, a love note written as “I ❤ U” is not the same as it is when written, I love you, sweetheart.” 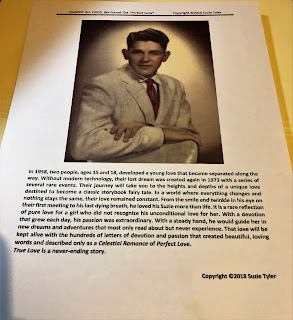 My heart will go on with an unforgettable love!