Who was Qasem Soleimani, the Iranian general killed in US airstrike? 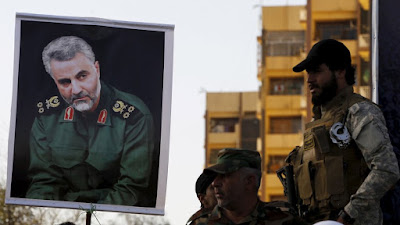 Qasem Soleimani was an Iranian major general in the Islamic Revolutionary Guard Corps (IRGC) and from 1998 until his death, commander of its Quds Force, a division primarily responsible for extraterritorial military and clandestine operations. Soleimani began his military career in the beginning of the Iran–Iraq War of the 1980s, during which he commanded the 41st Division. He was later involved in extraterritorial operations, providing military assistance to anti-Saddam Shia and Kurdish groups in Iraq, and later Hezbollah in Lebanon and Hamas in the Palestinian territories. In 2012, Soleimani helped bolster the Syrian government, a key Iranian ally, during the Syrian Civil War, particularly in its operations against ISIS and its offshoots. Soleimani also assisted in the command of combined Iraqi government and Shia militia forces that advanced against the Islamic State of Iraq and the Levant (ISIL) in 2014–2015. Soleimani was killed in a targeted U.S. airstrike on 3 January 2020 in Baghdad, Iraq. Also killed were Popular Mobilization Forces members. His rank was promoted to lieutenant general posthumously. Soleimani was suceeded by Esmail Ghaani as commander of the Quds force.
Early Life
Soleimani was born on 11 March 1957 in the village of Qanat-e Malek, Kerman Province, to an impoverished peasant family. In his youth, he moved to the city of Kerman and worked as a construction worker to help repay a debt his father owed. In 1975, he began working as a contractor for the Kerman Water Organization When not at work, he spent his time lifting weights in local gyms and attending the sermons of a traveling preacher, Hojjat Kamyab, a protege of Ayatollah Khomeini.
Military Career
On 22 September 1980, when Saddam Hussein launched an invasion of Iran, setting off the Iran–Iraq War (1980–1988), Soleimani joined the battlefield serving as the leader of a military company, consisting of men from Kerman whom he personally assembled and trained. He quickly earned a reputation for bravery, and rose through the ranks because of his role in the successful operations in retaking the lands Iraq had occupied, eventually becoming the commander of the 41st Sarallah Division while still in his 20s, participating in most major operations. He was mostly stationed at the southern front. He was seriously injured in Operation Tariq-ol-Qods. In a 1990 interview, he mentioned Operation Fath-ol-Mobin as "the best" operation he participated in and "very memorable", due to its difficulties yet positive outcome. He was also engaged in leading and organizing irregular warfare missions deep inside Iraq carried out by the Ramadan Headquarters. It was at this point that Suleimani established relations with Kurdish Iraqi leaders and the Shia Badr Organization, both of which were opposed to Iraq's Saddam Hussein. 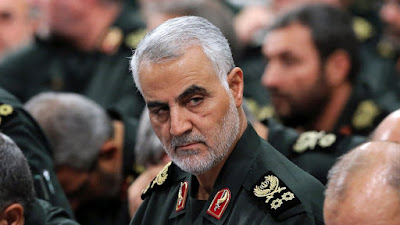 Command of Quds Force
The exact date of his appointment as commander of the IRGC's Quds Force is not clear, but Ali Alfoneh cites it as between 10 September 1997 and 21 March 1998. He was considered one of the possible successors to the post of commander of the IRGC, when General Yahya Rahim Safavi left this post in 2007. In 2008, he led a group of Iranian investigators looking into the death of Imad Mughniyah. Soleimani helped arrange a ceasefire between the Iraqi Army and Mahdi Army in March 2008. Following the September 11 attacks in 2001, Ryan Crocker, a senior State Department official in the United States, flew to Geneva to meet with Iranian diplomats who were under the direction of Soleimani with the purpose of collaborating to destroy the Taliban, which had targeted Shia Afghanis. This collaboration was instrumental in defining the targets of bombing operations in Afghanistan and in capturing key Al-Qaeda operatives, but abruptly ended in January 2002, when President George W. Bush named Iran as part of the "Axis of evil" in his State of the Union address.
Death
Soleimani was killed on 3 January 2020, after missiles shot from American drones targeted his convoy near Baghdad International Airport. He had just left his plane, which arrived in Iraq from Lebanon or Syria. His body was identified using a ring he wore on his finger, with DNA confirmation still pending. Also killed were four other Popular Mobilization Forces members, including Abu Mahdi al-Muhandis, the Iraqi-Iranian military commander who headed the PMF. The airstrike followed attacks on the American embassy in Baghdad by supporters of an Iran-backed Iraqi Shia militia and the 2019 K-1 Air Base attack. The United States Department of Defense issued a statement that said the U.S. strike was carried out "at the direction of the President" and asserted that Soleimani had been planning further attacks on American diplomats and military personnel and had approved the attacks on the American embassy in Baghdad in response to U.S. airstrikes in Iraq and Syria on 29 December 2019 and was meant to deter future attacks.

A Brief Questioning-Meditating on the…
Q&A with Phil Yates: Shaping the Futu…
Guess what? I am just like everyone e…
Top Extracts Kratom Review
The East winds of Digital Currency Ga…

Who was Qasem Soleimani, the Iranian general killed in US airstrike?