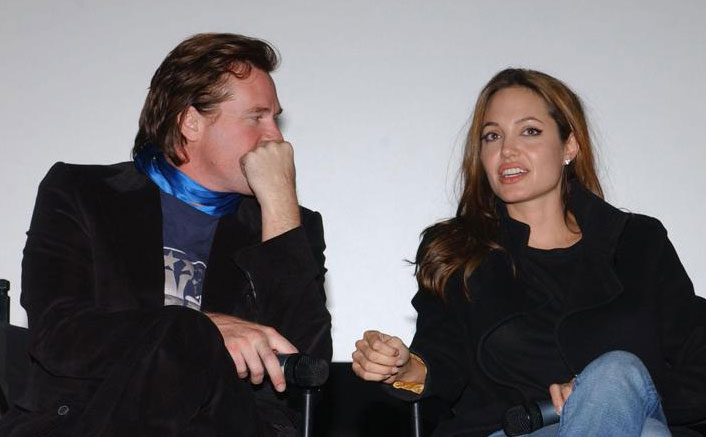 Val Kilmer was a raging sensation in the mid-80s for his stint in several popular comedies. The actor was also in the news for his several love affairs and flings with co-stars. But this time, the Top Gun star has made it to headlines after a series of intimate confessions about his fling with Angelina Jolie and a few others in his memoir “I’m Your Huckleberry.”

Yes, you read that right, guys! Val Kilmer has spilled his heart out on his fling with Jolie where he “couldn’t wait to kiss her”. A certain excerpt from Kilmer’s memoir reads, “I was rescued from an icy inferno of solitude by another angel. Perhaps the most soulful and serious of them all. Angelina. When people ask me what Angelina is like, I always say she’s like other women and other superstars, but just more. More gorgeous. More wise. More tragic. More magic. More grounded. Is it worth it? Worth knowing people who require weeks of effort to understand even a little? Yes.”

There are more secrets spilled as the excerpt further reads, “We developed a friendship. I was around when Angie’s mom [Marcheline Bertrand] was losing her battle with cancer. They were living in her mom’s favorite hotel. Or maybe it was Angie’s. I happened to be staying there myself. It was meaningful and mortal and effortless and exquisite. I couldn’t wait to kiss Angie, buy her [a] Gulfstream jet and have V+J painted in rainbow glory on the tail.”

But Val makes it clear that it is actress Daryl Hannah who he still pines for. Opening up about the heartache he felt when his relationship with Hannah was called quits, Val writes, “Lord knows I’ve suffered heartache. But Daryl was by far the most painful of all. I knew I would love her with my whole heart forever and that love has lost none of its strength. I am still in love with Daryl. When we finally broke up, I cried every single day for half a year.”

Well, now that certainly is quite a memoir! Do let us know what you think about the 60-year-old Val Kilmer’s confessions in our comments section below.

The post Val Kilmer Opens Up About His Fling With Angelina Jolie, But Confesses He Still Loves Daryl Hannah! appeared first on Koimoi.