It’s that time of the year when Bollywood stars fly out of India on vacation, to usher a brand new year. This year is no exception. Anushka Sharma with cricketer hubby Virat Kohli, Varun Dhawan with girlfriend Natasha Dalal, and Parineeti Chopra are among celebrities who are out holidaying.

Switzerland seems to be Bollywood’s favourite destination this year. Anushka and Virat are in the Alpine country, and who should they bump into but Varun and Natasha! 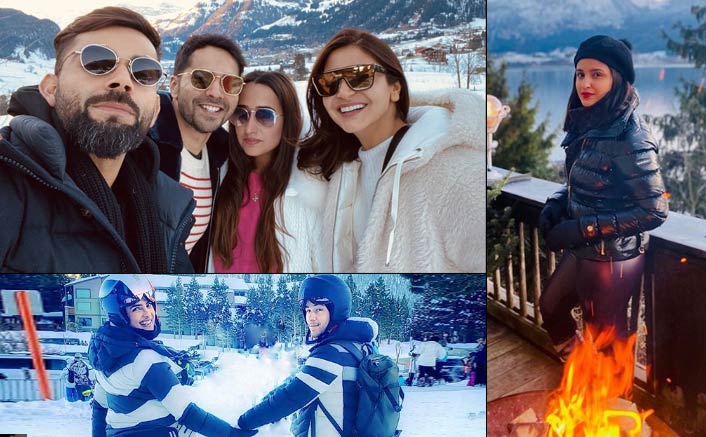 Varun also ran into sisters Karisma and Kareena Kapoor while they were enjoying “snowy days” in Switzerland.

Actress Parineeti Chopra is also “chilling” and braving the cold winter, but in different places.

Parineeti reveals she was in Munich, following which she has moved “onto even colder climates”. Her latest Instagram post suggests that she is in Austria now. In between sips of her cuppa, she posted: “Hot chocolate with a view.”

Her cousin and actress Priyanka Chopra Jonas is living “life as it should be”, with hubby Nick Jonas. The destination of their vacation is yet to be revealed. Earlier, they were in Mammoth Lakes, California.

Priyanka and Nick Jonas have been giving a glimpse of their vacation by posting photos. The singer shared a loved-up photo of the couple without revealing the destination and captioned it: “From the snow to the ocean. #lifeasitshouldbe.”

“Not a destination but a journey…. #Sisterhood #TravelBums #TapcTravels #Puchi #Mauritius,” she captioned a photo in which she and a friend are seen appreciating the view. It’s almost like the sky meets the beach.

The post From Anushka Sharma-Virat Kohli To Priyanka Chopra-Nick Jonas, Bollywood Celebs Who Are Chilling In Foreign Countries For New Year’s appeared first on Koimoi.