After peaceful protests by representatives of the Christian community and two cases being registered against them, choreographer-director Farah Khan and actress Raveena Tandon have apologized to His Eminence Cardinal Oswald Gracias, the Indian Cardinal of Roman Catholic Church.

Talking about the meeting, Farah said, “His Eminence Cardinal Oswald Gracias met us. We apologized and asked him to forgive our mistake and he very graciously accepted our apology. He also issued a statement on our behalf to end this matter.” 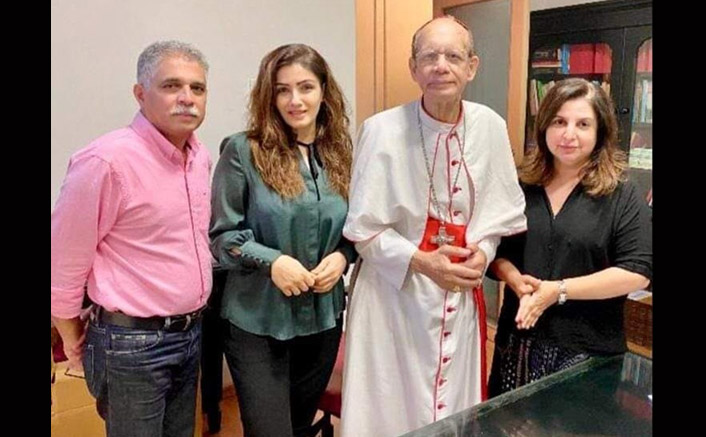 The statement released by Cardinal Gracias, Archbishop of Bombay, reads, “As already reported in the media, director-choreographer Farah Khan and actor Raveena Tandon met me to convey their apologies over the “Backbencher” web show. They expressed their unqualified apologies for hurting the sentiments of the Christian community. Comedian Bharti Singh, who is out of the country, sent an apology on an audio clip. They also handed me a written apology. It is regrettable that a prayer of praise was treated so disrespectfully. I was told this was due to ignorance. I accepted their sincere apologies and prayed with them. I was assured that they will be very careful in future. The Christmas season is one of joy, peace and reconciliation. With these sentiments, I closed the matter.”

Sharing a picture of the meeting, Farah wrote on Instagram, “To Err is human… to forgive divine. Your Eminence Cardinal Oswald Gracious … your blessings meant the world.”

The meeting was facilitated by MLA Ashish Shelar and Captain Allwyn Saldana.

Two cases have been registered by the Punjab police against Raveena and Farah, one in Ferozepur cantonment and the other in Ajnala town in Amritsar district. Farah, Raveena, and Bharti have been booked for allegedly hurting sentiments of the Christian community on a show when they allegedly trivialized the word “Hallelujah” while trying to pronounce it.

Farah Khan had earlier tweeted that she was “extremely saddened” that sentiments had been hurt by their antics.

“I’m extremely saddened that some sentiments have been inadvertently hurt by a recent episode of my show. I respect all religions, n it would never be my intention 2disrespect any. On behalf of the entire team, Raveena Tandon, Bharti Singh and myself. We do sincerely apologize,” she tweeted on Friday.