Rakul Preet has opened about the social media trolling she has been receiving recently after the release of her upcoming film Manmadhudu 2‘s teaser.

Talking about it with Pinkvilla, Rakul said that she doesn’t get bothered by the trolls. She has been quoted as saying, “I don’t really get bothered by trolls. I think logo ka kaam hai kehna, kuch toh log kahenge.” 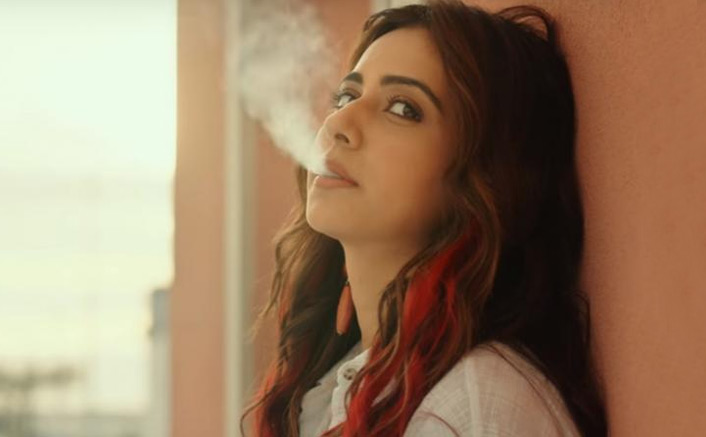 Rakul has been getting a lot of backlash from netizens ever since the Manmadhudu 2 teaser came out. The actress who was last seen in Bollywood film De De Pyaar De was trolled for smoking onscreen. Along with her, the director Rahul Ravindran and his singer wife Chinmayi Sripaada was trolled on social media. People called Chinmayi a hypocrite because she criticised Kabir Singh director Sandeep Reddy Vanga for his views on normalising slapping each other in a relationship.

Talking about more about the issue and comparing her character with Kabir Singh‘s, she said, “We are playing characters, now whether it is Kabir Singh, if Shahid is smoking in the film it does not make him a smoker. No way he is promoting smoking. He is playing a character Arjun Reddy that is flawed and he does those things. In real life Shahid Kapoor is a vegetarian, we all know that. People should disassociate to what we are playing onscreen is different and it is a story of that one person…we are not putting the entire girl clan into girls not showing in the right way. That’s not happening. It is that one character Avantika that smokes and it’s her story. Once you see the film, people will know why she does. Treat it like the character…For me, it was something different. I really don’t pay attention to trolls…there are bigger and better things to do.”

Also starring Akkineni Nagarjuna, Manmadhudu 2 is a remake of 2002 romantic comedy film, Manmadhudu. The film is slated to release on August 9 2019.

The post Rakul Preet Has A LIT Response For Trollers Backlashing Her Over ‘Smoking Scene’ In Manmadhudu 2 appeared first on Koimoi.

P-Square: I Will Never Reunite With Mr. P – Rudeboy

8 Accessories every girl must have in scorching summers