This year’s much anticipated Aamir Khan starrer Thugs Of Hindostan was touted to be the highest Bollywood earner, thus surpassing actor’s own Dangal. It came as a shocker when the movie crashed at the box office. With the collections showing poor trending, the fate is pretty much clear for this action-adventure. Even his contemporaries, Salman Khan and Shah Rukh Khan delivered duds last year, in the form of Tubelight and Jab Harry Met Sejal, respectively.

After a smashing start of 50.75 crores (Hindi version) and 52.25 crores (including Hindi, Tamil and Telugu version) on the first day, Aamir Khan starrer fared badly on its second and third day. The movie which released on Thursday managed to rake 28.25 crore on Friday and 22.75 crore on Saturday, thus making a total of 101.75 crores. 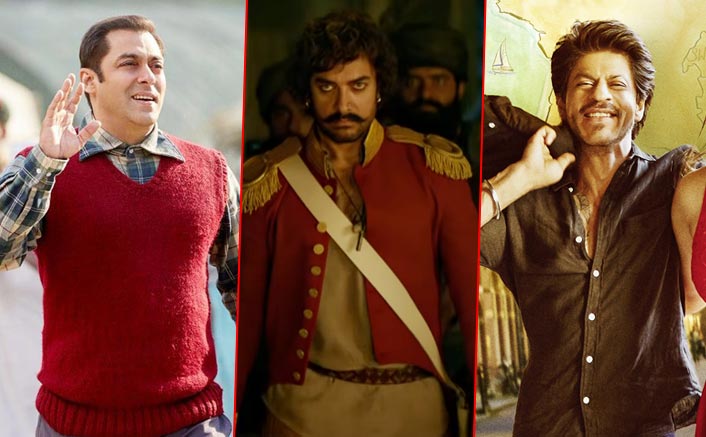 Last year, both Salman Khan & Shah Rukh Khan witnessed highs and lows at the box office. While they managed the box office successes in the form of Tiger Zinda Hai and Raees, the duo also delivered failures with Tubelight and Jab Harry Met Sejal.

Tubelight which featured Salman in an unusual avatar opened decently with 21.15 crores on its first day. Despite mixed to negative feedback from the audience, the movie showed a healthy rise in the collection with 23.50 crores coming on the second day. On the third day, Tubelight declined by collecting 20.12 crores, thus making a sum of 64.77 crores in first three days.

Shah Rukh Khan’s collaboration with ace director Imtiaz Ali did spark an excitement amongst movie maniacs before release, but it turned out to be an utter disappointment. The movie opened with the figures of 15.25 crores, becoming lowest opener for SRK, in recent times. It further stayed flat with almost similar collections on day 2 by collecting 15 crores and on its third day too, the movie made ordinary collections in the range of 15 crores. Jab Harry Met Sejal collected pretty average 45.75 crore in its three day weekend due to the negative word-of-mouth.

Now, even though Thugs Of Hindostan has made far better collections than above-mentioned movies, considering the mammoth budget and scale of the movie, everyone expected it to sustain much better.

The post Thugs Of Hindostan Vs Tubelight Vs Jab Harry Met Sejal: Clash Of The Duds At The Box Office! appeared first on Koimoi.