Who will win the General Elections in India and why? 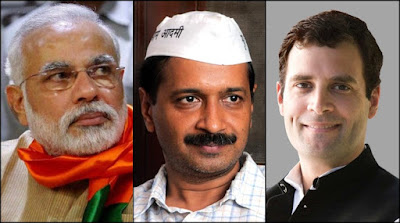 The 2019 Indian general Election is scheduled to be held in seven phases from 11 April to 19 May 2019 to constitute the 17th Lok Sabha. The counting of votes will be conducted on 23 May, and on the same day the results will be declared. Legislative Assembly elections in the states of Andhra Pradesh, Arunachal Pradesh, Odisha and Sikkim will be held simultaneously with the general election. All 543 elected MPs will be elected from single-member constituencies using first-past-the-post voting. The President of India nominates an additional two members from the Anglo-Indian community if he believes the community is under-represented. Eligible voters must be Indian citizens, 18 or older, an ordinary resident of the polling area of the constituency and possess a valid voter identification card issued by the Election Commission of India. Some people convicted of electoral or other offences are barred from voting. 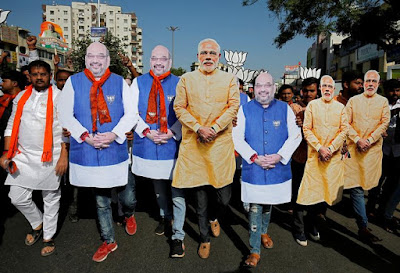 Earlier there were speculations that the Modi Government might advance the 2019 general election to counter the anti-incumbency factor, however learning from the past blunder of preponing an election made by the Vajpayee Government it decided to go into election as per the normal schedule which was announced by Election Commission of India (ECI) on 10 March 2019, after which Model Code of Conduct was applied with immediate effect. The voter-verified paper audit trail (VVPAT) system which enables electronic voting machines to record each vote cast by generating the EVM slip, will be introduced in all 543 Lok sabha constituencies. A total of 17.4 lakh VVPAT units and 39.6 lakh EVMs will be used in as many as 10,35,918 polling stations during the elections. On 9 April 2019, Supreme Court of India gave the judgement, ordering the Election Commission of India to increase VVPAT slips vote count to five randomly selected EVMs per assembly constituency, which means Election Commission of India has to count VVPAT slips of 20,625 EVMs. Though the exercise of matching EVM results with paper trail machine slips was being held in various assembly elections, this is the first time it will be undertaken in Lok Sabha polls. According to the Election Commission of India, 900 million people were eligible to vote, with an increase of 84.3 million voters since the last general election in 2014, making this the largest-ever election in the world. 15 million voters in the age group of 18–19 years are eligible to exercise their right to vote for the first time while 38,325 transgenders will be able to vote for the first time as members of the third-sex and not as male or female. 71,735 overseas voters have been enrolled in the electoral rolls for the 2019 Lok Sabha elections. 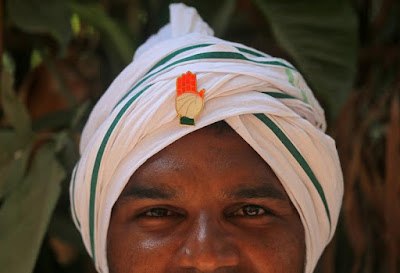 The election schedule was announced on 10 March 2019, and with it the Model Code of Conduct came into force. The election is scheduled to be held in seven phases, with counting starting on 23 May. In Bihar, Uttar Pradesh and West Bengal, the election will be held in all seven phases. The polling for the Anantanag constituency in the state of Jammu and Kashmir will be held in three phases, the first of its kind, due to violence in the region that had prompted the ECI to cancel a bypoll in 2016, leaving it vacant since then. A number of issues are expected to be of importance in this election. These include the country's recent conflict with Pakistan, GST,  unemployment, and national security. 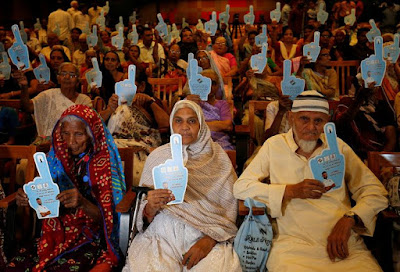 During the election campaign, the opposition parties have claimed that the NDA government is destroying democratic institutions and processes. Opposition party leaders such as Mamata Banerjee have campaigned on this issue. In response, Modi termed the allegations "a big joke", commenting that Congress and the communists had themselves undermined institutions including the police, CBI and the CAG, and cited the murder of BJP activists in Kerala and Madhya Pradesh. According to The Times of India, the major economic achievements of the incumbent NDA government include an inflation rate less than 4 percent, the GST reform, the Insolvency and Bankruptcy Code, its programs in recent years have positively touched many among the Indian masses, programs such as the Jan Dhan Yojana, rural cooking gas and electricity for homes. According to the IMF, the Indian economy has been growing in recent years, its GDP growth rate is among the highest in the world for major economies, and India is expected to be the fastest growing major economy in 2019-2020 and 2020-2021, with real GDP projected to grow at 7.3 percent. The GDP growth data has been disputed by a group of Indian social scientists, economists and the political opposition, while a group of Indian chartered accountants has defended the data, the GDP calculation methodology, and questioned the motivations of those challenging the recent Indian GDP statistics. The opposition's election campaign has highlighted that both the demonetization and GST law has "seriously hit small business, farmers and casual labor", states The Times of India. 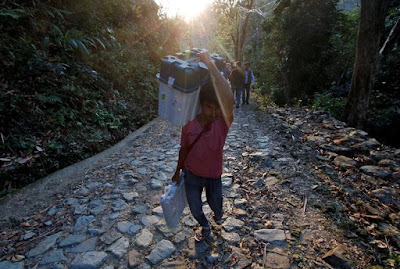 In response to the 2019 Pulwama attack, the Indian Air Force conducted airstrikes inside Pakistan — for the first time since the 1971 Indo-Pak war. The country's ongoing conflict with Pakistan is predicted to be a significant factor in this election. The opposition accused Modi of politicising the army, whilst the BJP countered their accusations by stating that such allegations raised by them were adversely affecting the morale of India's armed forces. According to the Pew Research Center, both before and after the outbreak of recent India-Pakistan tensions, their 2018 and 2019 surveys suggest that the significant majority of the Indian voters consider Pakistan as a "very serious threat" to their country, and terrorism to be a "very big problem". 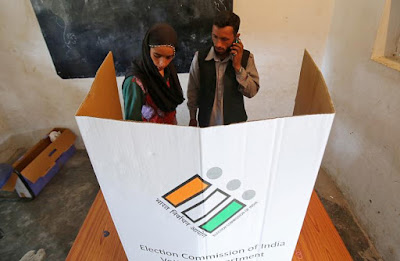 According to the Pew Research Center, a significant majority of Indian voters consider the lack of employment opportunities as a "very big problem" in their country. "About 18.6 million Indians were jobless and another 393.7 million work in poor-quality jobs vulnerable to displacement", states the Pew report. A report on unemployment prepared by the National Sample Survey Office's (NSSO's) periodic labour force survey, has not been officially released by the government. According to Business Today, this report is the "first comprehensive survey on employment conducted by a government agency after Prime Minister Narendra Modi announced demonetisation move in November 2016". According to this report, the 2017–2018 unemployment rate in India at 6.1%, a four decade high. The government has claimed that the report was not final. According to the International Labor Organization (ILO) – a United Nations agency, unemployment is rising in India and the "unemployment rate in the country [India] will stand at 3.5 percent in 2018 and 2019 – the same level of unemployment seen in 2017 and 2016", instead of dropping to 3.4 percent as it had previously projected. According to the ILO's World Employment Social Outlook Report, the unemployment rate in India has been in the 3.4% to 3.6% range over the UPA-government led 2009–2014 and the NDA-government led 2014–2019 periods. 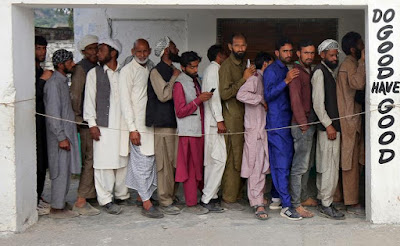 On 12 January 2019, prime minister Narendra Modi launched the Bharatiya Janata Party's election campaign, which sought a second term. On the same day, both Mayawati (president of the Bahujan Samaj Party) and Akhilesh Yadav (president of the Samajwadi Party) announced an alliance to contest 76 seats out of the 80 in Uttar Pradesh and the alliance will not fight in four seats, namely Amethi and Rae Bareli which they left for Congress and another two for other political parties. The alliance did not include Congress, with Mayawati stating, "Including Congress in the alliance will hurt SP-BSP prospects as Congress's votes do not get transferred" and "the policies of both these parties [BJP and Congress] have been mostly the same". The alliance was the second of its kind with a similar coalition formed 25 years ago in 1993. The Indian National Congress Party president Rahul Gandhi launched his election campaign from Gujarat's Lal Dungri site where other members of the Nehru dynasty began their general elections campaign, including his grandmother Indira Gandhi and father Rajiv Gandhi. In 2015, an India-Bangladesh boundary agreement was signed, in which the two countries exchanged their enclaves. As a result, it will be the first time in which residents of these former enclaves vote in an Indian general election.
Courtesy : Wikipedia 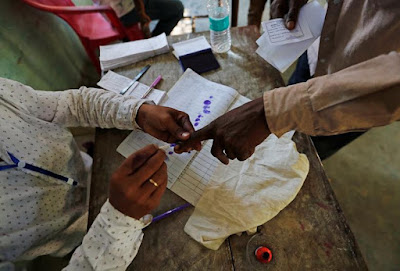 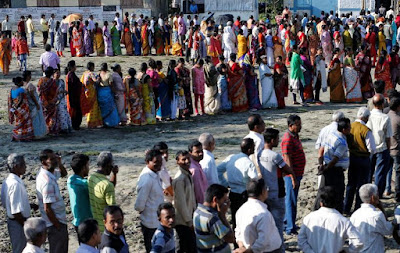 Merry Christmas and Mahatma Gandhi
Wazirx CEO Nischal Shetty on the Indi…
Best Gaming PC Build for 1440p: Under…
Can I tell you the truth?
Best Places Where You Can Plan Your D…

Who will win the General Elections in India and why?