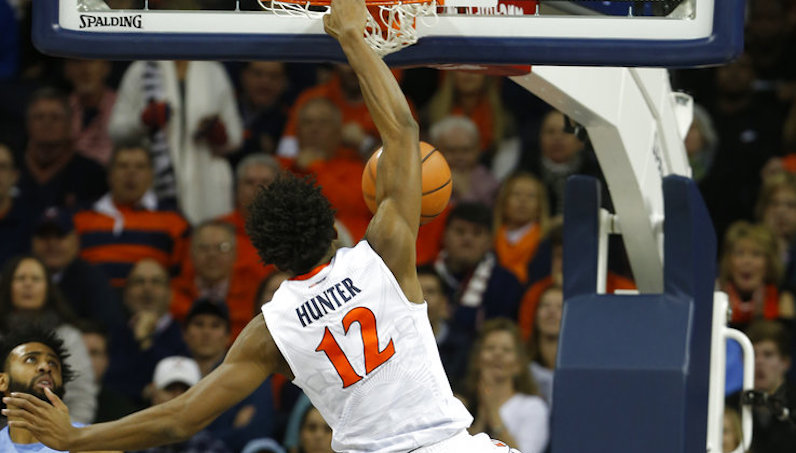 The Virginia Cavaliers have lost their second starter from this year’s national championship season. Star guard De’Andre Hunter has officially declared for the 2019 NBA Draft. The sophomore is declaring with the intent to forgo his final two seasons of college eligibility and begin his pro basketball career. He is projected as a top ten selection in the draft.

Being at the University of Virginia has been an amazing experience. From being a redshirt to winning a national championship, the journey has been unbelievable. I want to say thank you to Coach Bennett and the coaching staff for challenging me everyday to become not only a better basketball player but a better man off the court. I am forever grateful for them. Winning a national championship has always been a dream of mine and accomplishing that with this team is something I will never forget. Thank you to all the fans for your tremendous support. You guys will always be in my heart. My family has always been my backbone. I could never thank them enough for all of the work they have done for me. My mom, brother, and two sisters have always been there for me and without them I would not be the man I am today. I want to Thank God for blessing me with this unique opportunity. Playing NBA was always a lifelong dream, with that being said I would like to announce that I will be entering the NBA draft and signing an agent. UVA will always be a special place to me. Wahoowa! ??

The guard has amazing height for the NBA listed at 6’7″ and 225 pounds. He may end up playing more forward when he reaches the NBA, but he is more than capable at either wing position. His second season with the Cavaliers saw him average 15.2 points and 5.1 rebounds per game. He also shot 52 percent from the field this year.

Hunter is more than capable on offense and defense at an NBA level. The guard is more than ready for the NBA level and will get some top five looks. He is a sure fire top ten pick and will provide immediate impact. The sophomore is projected to go fifth overall in the 2019 Def Pen NBA Mock Draft.