THE HISTORY OF THE PANDEMIC SPANISH FLU IN 1918 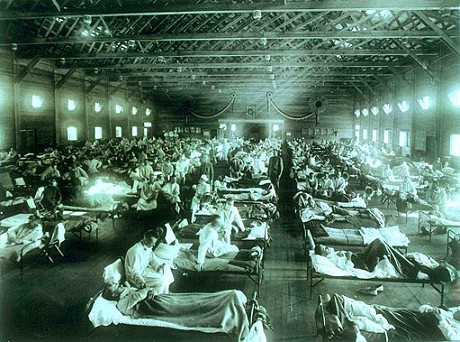 Victims of the Spanish Flu in 1819
The whole world is sad and almost every country is mourning because of the coronavirus pandemic, which originates from Wuhan, China, engulfing the world like a bush fire in the dry season, taking both the young, old, whites and blacks, to their unexpecting graves.
Many of us today weren't born when similar pandemics previously hit the world. One of such pandemics which claimed millions of lives was the Spanish flu. What is the story behind this pandemic? And why is it called the Spanish flu?
The Spanish flu first appeared in April 1918, in The United States. However, the deadly flu had its name Spanish flu because Spain was the first European country to announce the pandemic.
It was a neutral state on a war-torn continent and there was no strict military censorship. The Spaniards themselves called that pandemic "Pesadilla," meaning a nightmare.
It was impossible to hide the scale of the disease when the Spanish king Alfonso XIII, the prime minister, and almost the entire cabinet fell ill with a high fever.
If in past years the flu usually mowed children and the elderly, pregnant and people with pathologies, then the Spaniard behaved differently. The victims of the epidemic were young citizens in their prime, between the ages of 20 to 40 years.
Symptoms of the disease were blue complexion, pneumonia, and a bloody cough. The fact is that in the later stages, intrapulmonary bleeding often occurred, and the infected person was choked with his own blood. According to virologists, most likely, the cause of high mortality was not the usual course of the disease.
A Spanish woman led to fulminant destruction of the respiratory tissues and filling the lungs with sputum. Neither youth, nor immunity, nor the physical strength of potential victims of infection saved from such an infection.
The beginning of the last century, as we know, was characterized by industrial growth spurred by technological progress. It was at this time that the railways were being built with might and main, the airships plowed the sky, and the big ships take over the ocean.
It is not surprising that at such speeds of scientific thought, the Virus began a victorious march on the planet with leaps and bounds. For a whole year (though only in some countries) not only shops, theaters, and schools, but even courts and churches were closed.
Handshakes were forbidden, as now, just like today's situation in the coronavirus and in some places, the military was established for a long time. Despite the unprecedented attacks on personal freedoms, large victims could not be avoided,  however, according to the researchers, there would be many more deaths if there were no restrictions.
In the first 25 weeks, the flu killed 25 million people. In Barcelona, ​​Spain alone, 1,200 people died every day. The massive movement of troops of countries participating in the First World War led to an acceleration of the spread of influenza and the entire villages from Alaska to South Africa became extinct.
The hardships of the war contributed to the widespread of the infection: unsanitary conditions, malnutrition, and undeveloped refugee camps. In the 18 months of 1919-1920, about 550 million people became infected.
According to the researchers, the data of the number of deceased, the data of researchers differ, some say about 17 million, others, about 50, while others claimed about 100 million.
Thus, the world population for this short time decreased by 0.9-5.3 percent. This allows virologists to consider the Spanish pandemic as one of the largest disasters in human history.
Modern scientists have managed to unravel the nature of this worldwide infection. In 1997, the U.S. Army Institute of Molecular Pathology (AFIP) received a sample of the 1918 H1N1 virus. He was isolated from the corpse of a native Alaskan woman. 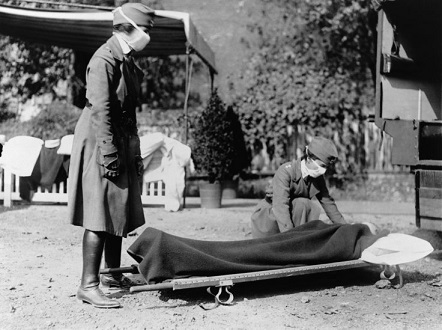 The 1918 Spanish flu epidemic
The buried body lay in permafrost for more than 80 years. The resulting sample helped researchers in October 2002 to recreate the gene structure of the Spanish virus, which the planet was covered in 1918-1920. As it turned out, it is a virus of the same serotype as H1N1, which caused the 2009 swine flu pandemic.
What other conclusions do scientists make? Indeed, today such comparative studies are of particular relevance. As you know, now a debate has flared up in the world whether or not to introduce strict quarantine measures with a ban on people even leaving their homes.
Now over a hundred years since the Influenza killed millions, we are now under attack by a new virus called the Coronavirus which was said to originate from China. The disease infected over 1,412,378 and killed 81,099 worldwide.
Businesses have collapsed and thousands are left unemployed. The streets remain quiet without any activities since everyone needs to stay home to avoid the spread of the disease.
Nobody knows when the coronavirus will subside but one thing we believe is since many survived the 1918 Spanish flu, it's only a matter of time many will survive to tell the story to the next generation.

THE HISTORY OF THE PANDEMIC SPANISH FLU IN 1918