THE CORONAVIRUS IS THE BIGGEST CRIME AGAINST HUMANITY AFTER AIDS 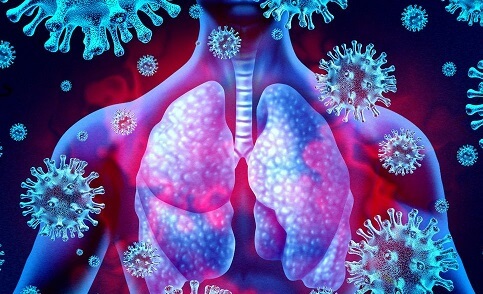 The effect of COVID-19 on the lungs is very disastrous

Politicians often hunt down terrorists because they consider terrorism as a threat to society and humanity, yet the same politicians are not different, they are medical terrorists for decades. They are responsible for HIV, Aids, Ebola, nodding disease, and the coronavirus today.

On March 13, 2021, I received a message from one of my Readers telling me this: “Hi Joel, I want to inform you about the fact that I was shocked when I opened your page this morning.

The screen was blocked by the advertisement you can see on the screenshot I made. I want to let you know....” Of course, we know what is going on.

I have been receiving this report daily from numerous readers that believe in what I write. A lot of readers worldwide, including in Africa are denied access to reading the true medical information we provide on our blogs.

A reader in Africa opens an article on my blog and it was directed straight to an advert. How long can this go on? Why are they afraid if you haven’t committed any crime? Now some European and American journalists are being paid to write false Health articles about HIV, Aids, Ebola, and Nodding syndrome.

The World Health Organization - WHO, Centers for Disease Control - CDC, Belgium, and the US government, have committed so many crimes against humanity in Africa to the extent that they feel restless. They thinking destroying our genuine health “Secrets of Aids and Ebola,” which continued to expose them will give them some rest.  In fact, your pain is just the beginning.

I find it very interesting that the afore-mentioned institutions that often want the world to trust them and always tough on people to obey the law, rules and regulations are indeed afraid of a common African writer.

The famous genuine health blog "Secrets of Aids and Ebola," is now gone because it exposes crimes the World Health Organization, Centers for Disease Control, the US and Belgium governments have committed against humanity, especially in Africa.

As I have said over and over, I don't need Google for my articles to be read, the search engine company knows I have thousands of readers worldwide on social media who have confidence in me, pertaining to what I write but their access to read what I write has been denied.

Let them continue to do whatever they can because while you fight someone on the path of the truth, your clandestine actions toward the innocent are also being reviewed by others, which will be used against you at the right time.

If my readers don’t believe in me or the articles we write about the clandestine crimes by rich people, politicians, and wealthy institutions, they will never tell me any time their access to reading articles is denied.

The world is rapidly changing than ever because it’s an era that politicians are reaping the evil they have planted on this earth. Every crime committed against humanity by wealthy organizations will come out.

More people will die and many more will suffer because there is no more truth in this world and those that have chosen to pass on the path of the truth are considered dangerous to society, therefore, the authorities, made of rich people, search engine companies and health institutions need to torment them because they pose a threat to uncovering the crimes they derived money from.

I will be the last man on this earth to give respect to rich people, especially any European or American politicians because the majority are behind today’s calamities, atrocities, and crimes against humanity.

We have the FBI and the investigation team want the world to trust and believe them but the whole investigative department breeds nothing other than corrupt officials. In fact, if truly there is God that we believe in then this invincible God must do something very fast because we can't take it any longer.

Today, all the foreign countries that conspired and supported the US to murder innocent victims in Africa have been severely attacked by the coronavirus. This is enough to let you know that whatever evil a man sows the same he shall reap.

This is the truth I write, the reason I am not afraid of anyone. You can continue to be afraid of me and get the high blood pressure you deserve. I will never regret it if I die today because I am proud of what I stand for.

THE CORONAVIRUS IS THE BIGGEST CRIME AGAINST HUMANITY AFTER AIDS