The Biggest Global Threat Is Bill Gates Not The Coronavirus 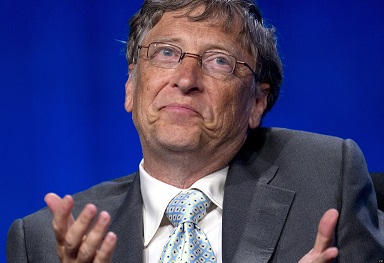 Bill Gates, a criminal among criminals that the genuine law has to put him behind bars for 50 years

I am an African writer and in my country of birth, Ghana, we speak with proverbs. One of them is "a child who wouldn't like the mother to sleep by crying the whole night, will also not sleep." So if Bill Gates' ambition is to depopulate this world, causing panic with contaminated vaccines, yet the mainstream media can't speak the truth about it. I will also not let Bill Gates sleep.

10 Home Maintenance Tasks and Items T…
How much does Drake make in a year
Hired an Autosleeper Duetto
Can You be Too Old for Entrepreneursh…
Christian T-shirt Business Spotlight:…

Who is Bill Gates? The media introduces Gates as an American computer programmer and entrepreneur who cofounded Microsoft Corporation. What an inaccurate nice introduction? Actually, the best introduction the media has avoided is "Bill Gates is a criminal businessman that never studied medicine at school, yet attached to the World Health Organization to carry out sinister activities."

In the year 2000, Bill Gates and his wife Melinda established a charitable organization to be known as 'Bill and Melinda Gates Foundation.' Within a period of 20 years, Bill Gates spent over $54 billion dollars on diverse charitable projects, and in the participation of development of vaccines with the ambition to reduce the world's population.

Apart from global warming which has been a serious discussion around the globe, overpopulation also needs immediate attention, taking into consideration the rapidly increasing population in the third world, especially Africa, a continent characterized by conflicts, poverty, and food shortages, often people leaving the continent in hazardous journeys across the Mediterranean in search of greener pastures.

Bill Gates has won the hearts of unsuspecting people with his charitable organization but the intelligent ones continue to ask why Gates is firmly attached to the World Health Organization and has invested many millions into vaccine productions? The real plan of Bill Gates is population decline in other words, eugenics, choosing who lives and who must die.

Taking the immense poverty, overpopulation, and corruption as sources of opportunities, Bill Gates preys on vulnerable people in the third world countries, including Africa. At a conference in Long Beach, California, named 'TED2010 Conference', Bill Gates spoke about the world's population.

He mentioned 6.8 billion people and said to artificially reduce the global CO2 emissions to zero by 2050, "if we do a lot of work on new vaccines, health care, reproductive health services, we will reduce it by perhaps 10 or 15 percent. "

Why such a person will not be a suspect of the coronavirus that has killed thousands of people around the globe even though the virus originates from China?

Gates has taken Africa as his sanctuary, convinced that he will get rid of all diseases on that continent, Bill, and Melinda Gates' Foundation uses Africans as guinea pigs in experimenting with new vaccines manufactured in the United States of America.

To reduce the population in Africa and make money from vaccines, Kim Jon Un of North Korea and the Russian leader, Vladimir Putin, accused Bill Gates of experimenting and spreading Ebola in Africa.

This is what I write, the reason I am now a victim of hate to the US government, Bill Gates, and Google because of the platform I am using which belongs to Google. Many people don't know that 'blogger blog,' is for Google, unfortunately, they are wasting their time, I am not a kind of person people can push around without paying for it.

I can see clearly now but not as Jimmy Cliff saw that the rain is gone but after publishing this article - Dr. Raoult Calls On Africans Not To Take Bill Gates’ Covid – 19 Vaccine

https://juskosave.blogspot.com/2020/03/dr-raoult-calls-on-africans-not-to-take.html, the article shattered the dreams of Bill Gates taking his contaminated vaccines, including coronavirus vaccines to African markets.

Since then, Bill Gates is striding and making efforts for world readers to accept the article as fake. Firstly, he contacted an African journalist, Amanuel Neguede, from Ethiopia, the same country of the corrupt Tedros Ghebreyesus, the Director-General of the World Health Organization comes from, to write a false article that the "French doctor did not urge Africans to avoid a Bill Gates vaccine." The article was published on April 9, 2020.

I wrote back to counter-attack his false article with AN OPEN LETTER TO AFP JOURNALIST AMANUEL NEGUEDE ABOUT BILL GATES' VACCINES. That wasn't enough for Bill Gates.

So what we need to ask here is why this particular article has been a nightmare to Google, the World Health Organization, and Bill Gates?

Since Bill Gates sponsors the World Health Organization and has also invested millions of dollars into vaccines, the WHO wants him to get back his profits which can only be possible in third world countries, including African countries. So to them, the need to fight that article and declare it as a fake is very necessary.

However, we need to ask another important question, why Google, such a reputable search engine company will join these dirty pigs without conscience, integrity, and empathy to deliberately divert all my article links pertaining to the crimes of the US government, Bill Gates and the World Health Organization to 404 errors?

The race to find the right vaccine to save the world from the ferocious devastation of the coronavirus is now the front page news.

In my opinion, the biggest threat the world faces today is not the coronavirus but Bill Gates and his associates forcing those without vision to accept their lies and abandoned the truth.

Recently, Italian congresswoman, Sarah Cunial, called for the arrest of Bill Gates, the article I published on this particular blog has vanished from my blog. I tried everything and couldn't find the article on this blog. Google has manipulated all my articles pertaining to every crime about Bill Gates, the World Health Organization, and the US government.

I think it's time to whom it may concern to bring Google to answer charges of clandestine crimes by changing and manipulating writers' blogs in favor of criminal individuals and health institutions.

The Biggest Global Threat Is Bill Gates Not The Coronavirus