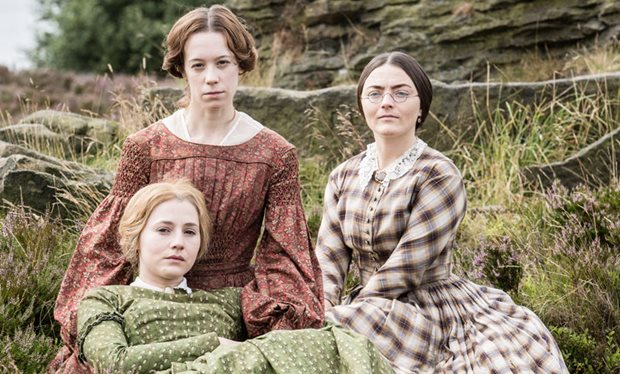 Ever since they were revealed to the world as quaint country-women, the Brontë sisters have fascinated legions of devoted readers. MASTERPIECE brings these remarkable literary geniuses to life with a beautifully filmed and acted two-hour drama, To Walk Invisible The Brontë Sisters.

Written and directed by Sally Wainwright (Happy Valley, Last Tango in Halifax), To Walk Invisible depicts the evolution of secluded, dutiful clergyman’s daughters into authors of the most controversial fiction of the 1840s. The drama stars Finn Atkins (Eden Lake) as Charlotte, who shocked society with her edgy epic, Jane Eyre; Chloe Pirrie (War and Peace) as Emily, author of the darkly gothic and disturbing Wuthering Heights; and Charlie Murphy (Happy Valley) as Anne, whose penned the true-to-life love story The Tenant of Wildfell Hall.

Also starring are Jonathan Pryce (Wolf Hall) as their distracted father, Reverend Patrick Brontë; and Adam Nagaitis as the sisters’ only brother, Branwell, whose wild and dissipated life contributed to vivid characters in each of their novels.


This post first appeared on The League Of British Artists, please read the originial post: here
People also like
Discover the Magic of Venice in November
How Anyone Can Become Good at Blackjack
Slip Anna
15 Insanely Perfect Backpacks For Teen Boys
Quakers, radicals and witches: a walk back in time on Pendle Hill
Why Behavioral Interview Questions Provide More Insight for Healthcare Hiring
Legendary Guitar Player Robben Ford Releases New Single “White Rock Beer…8 Cents”
Five Things You Don’t Need To Get Healthy and Stay Fit
“The Friend Who May Not Seem a Friend” – The Cat and the Fire, Post 2 of 3