Tags: democrats fox news republican
October 24th 2018
View original
Background:
1. Trump's Terrorist Attack On the Press (With Fox News Support)
2. Republicans Demonstrate How To Kill People With Rhetoric (Something We Know Can Be Done Since The 1900s!)... Can Regular Citizens Get Secret Service Protection Too?
3. The Right Wing Are Basically Terrorists Or "Terrorist Creators" (Alt Right Terrorists Is The Politically Correct Term)
4. Using Lies & Out Of Context Quotes Fox News Tries To Paint The Left As A Mob
5. Its Impossible To Talk About Trump And His Decisions Without Fox News

This post shows that Trump. GOP and Fox News are - Obviously - Seeking To Drum Up Violent Reaction From Their Followers......

With the midterm elections only four weeks away, a slew of Fox News commentators are warning their conservative viewers that they are physically imperiled by a “violent” leftist “mob” and must vote to keep Republicans in power in order to protect themselves. Their argument is an effort to turn out the GOP base by weaponizing conservative criticism of the protestors who opposed Brett Kavanaugh’s confirmation to the Supreme Court.

Does a Home-Based Business Really Wor…
Good health and fitness is worth figh…
Wuhan Weather Report
Apartment Therapy Pattern of the Year…
Can CBD oil be addictive?
“Anyone who sits right of center, anyone who's a Trump supporter, we're all targets” of public harassment from the left, contributor Tomi Lahren explained on Fox & Friends Tuesday morning. “The average citizen, if you're on the right, should be concerned and in danger.” Sebastian Gorka, a former White House aide now at Fox, similarly argued that the Democrats had “normalized violence in America,” comparing the need to fight back against that purported effort to the Revolutionary War.
Fox’s message has not appeared in a vacuum -- as usual, the network is taking cues from the Republican Party. Most Americans disapprove of the job President Donald Trump is doing and abhor the Republican Congress, making it more likely that Democrats will gain control of the House or Senate and exercise much-needed oversight of the administration. In response, Republicans have seized on protests against Kavanaugh’s confirmation, trying to whip up their base by conflating those protests and Democrats as a whole. That opposition, they claim, is a dangerous “mob” that cannot be allowed to gain power.
“In their quest for power, the radical Democrats have turned into an angry mob,” Trump said at a rally in Topeka, KS, on Saturday. “You don't hand matches to an arsonist, and you don't give power to an angry left-wing mob. That's what they have become. The Democrats have become too extreme and too dangerous to govern.”
Trump’s framing of the midterm elections as a battle against the “angry left-wing mob” consumed Fox’s prime-time programming on Monday.
“In 29 days, the choice is going to be clear,” argued Sean Hannity, the Trump propagandist with so much influence on the president that White House aides describe him as the shadow chief of staff. “Do you want mob rule or law and order?” He went on to say that viewers who lived in states with toss-up Senate races had the opportunity to reject senators who “gave in to the Democratic mob” by voting against Kavanaugh’s confirmation, adding that “there are no more moderates left in the Democratic Party,” which has “evolved into a party of the radical far left.”

Laura Ingraham, who at one point was considered for the White House communications director job, made the exact same point on her Fox show. “There is too much on the line for intraparty squabbles any longer,” she argued Monday. “And the choice for voters is now really simple. Mob rule or the rule of law? Perpetual rage or real results?” Later in the program, Monica Crowley, a Fox contributor who decided not to join the Trump administration following the revelation that she had plagiarized parts of her book, argued that the left is “violent” and “at war” against, among other things, “individual liberty.”
And Tucker Carlson, another host with keen influence over the president, said that Democratic donor Tom Steyer’s claim that Kavanaugh had been supported by “entitled white men” was “exactly the kind of thing that Hutu leaders in Rwanda were saying in the early 1990s” before committing genocide against the Tutsi tribe.
Fox has long operated as the communications arm of the Republican Party, remaking itself since Trump’s ascension as his personal propaganda outlet. Expect to see its commentators pull out all the stops over the next month in order to maintain congressional Republicans’ majority and protect Trump from meaningful oversight.
Fox ramps up election strategy of convincing viewers that Democrats are coming to kill them

If you tuned in to Fox News over the last week, you may have heard Democrats described as a nascent “brown shirt party” or a “lynch mob” led by a “street thug” who is urging party activists to physically assaultRepublicans.
The conservative network has been warning its audience of GOP base voters that their very lives may be at stake if they don’t turn out to vote in the midterm elections and allow Democrats to triumph. That message aligns with what President Donald Trump, the Republican National Committee, and congressional Republicans have been arguing as the elections approach.
Fox has long acted as the Republican Party’s communications arm, serving as a megaphone for the party and championing its candidates. Now, that effort has been super-charged by its feedback loop with the president as he and the network unite to try to get Republican voters to the polls next month.
On Monday morning, Trump tweeted:

“The only way to shut down the Democrats new Mob Rule strategy is to stop them cold at the Ballot Box. The fight for America’s future is never over!” Ben Shapiro

Twitter Ads info and privacy
Trump was citing a comment Fox host Ben Shapiro made the previous night on his weekly show putatively devoted to the election. Shapiro brought up the purported Democratic “mob rule” plan during a segmenthighlighting “10 reasons you should go out to vote on November 6 and vote Republican.” “Your vote matters, your vote counts,” Shapiro said to close the segment. “Get out there on Election Day and ensure the Democratic Party of Nancy Pelosi and Chuck Schumer and Hillary Clinton aren’t allowed anywhere near the levers of power.”
That same morning, the hosts and guests of Fox & Friends, one of the president’s favorite programs, pushed this strategy in at least three different ways: They contrasted the purported Democratic message of violence against a supposed Republican message of policy; they lifted up cases of left-wing violence while ignoring cases of right-wing violence; and they took comments made by Democrats out of context to pretend they were actually calls for violence. 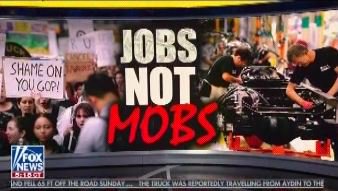 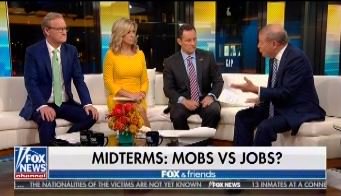 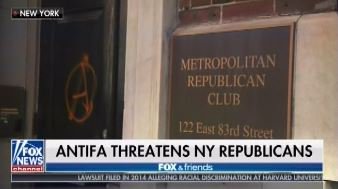 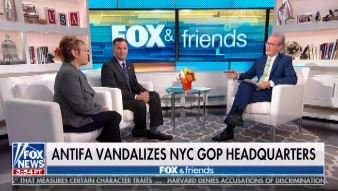 Fox & Friends’ commentators depicted the choice voters face in November as one between a Republican message of jobs and a Democratic one of “mob rule.”
“I don't think America likes violence in the street. Political violence has no place in America,” Fox’s Stuart Varney argued. “The emotion of the mob and the nonsense of socialism combined, I think, is an untenable position. Meanwhile, as you point out, President Trump’s out there holding these rallies, pounding the table, very confident of the performance of the economy. There is a sharp contrast here.”
Trump himself couldn’t have said it better.

On Friday, before a scheduled appearance in which Gavin McInnes had promised to re-enact the violent 1960 murder of a Japanese socialist, the Metropolitan Republican Club in Manhattan was vandalized with anarchist graffiti and broken windows. McInnes, who is the founder of Proud Boys, a far-right violent street gang, has a long record of making calls for violence against the left, and after the event, his minions acted. Proud Boys “got in a violent encounter on the streets of New York on Friday night after a speech from … McInnes, with videos showing more than a dozen members of the group kicking and punching people on the ground,” The Daily Beast reported. New York Democrat Gov. Andrew Cuomo subsequently asked federal and state law enforcement to aid the New York Police Department’s probe.
But when Fox & Friends discussed the situation on Monday, the hosts focused solely on the left-wing vandalism -- which they attributed to “antifa,” the anti-fascist activists who have long been a network bugaboo-- and ignored the right-wing violence. The program did something similar over the weekend.
Over the caption “Antifa Threatens NY Republicans,” on Monday, co-host Steve Doocy asked Marc Molinaro, the Republican nominee for governor of New York, his thoughts on the group. Molinaro responded that the vandalism was “an outrageous attack” that “threatened staff and the people in that building” before saying there’s a need for those on “all sides of the aisle” to “tone down the rhetoric.” He went on to criticize Cuomo for supposedly wanting “nothing more than to talk about that.”
The point about Cuomo might have confused viewers, as Fox & Friends had not mentioned either the violence by the Proud Boys or Cuomo’s subsequent actions.

Pretending that Democrats are calling for violence

Much of the right-wing’s “mob” critique involves breathlessly reading comments from Democrats in bad faith to claim that those Democrats are issuing calls for violence, rather than using metaphors. For much of last week, right-wing media were transfixed by comments by former Attorney General Eric Holder, which conservatives took out of context to suggest that he literally called for Democrats to “kick” Republicans. It was mind-numbingly obvious that Holder was speaking metaphorically -- indeed, he specifically said as much at the time.
On Fox & Friends this morning, the crew attempted a similar smear against actor Alec Baldwin. During a Sunday night speech at a fundraiser for the New Hampshire Democratic Party, Baldwin said, “The way we implement change in America is through elections. We change governments here at home in an orderly and formal way. In that orderly and formal way and lawful way, we need to overthrow the government of the United States under Donald Trump.” There is no fair way to read these comments as anything other than a call for Americans to vote for Democrats in order to change the party that controls Congress.
Nonetheless, Fox & Friends did it. The program aired portions of Baldwin’s remarks -- neatly excising his specific references to elections -- then hosted right-wing commentator Dan Bongino to discuss them. Bongino called Baldwin a “deranged lunatic,” adding, “There isn’t a lawful way to overthrow the government.”
Edging perilously close to the truth, Doocy responded by suggesting that Baldwin might have been referring to elections. But after Bongino and co-host Brian Kilmeade quickly rejected this obviously correct theory, Doocy responded, “I don’t know what he’s talking about.”
Meet The Press sanitizes Proud Boys’ involvement in Miami protests Host Chuck Todd discusses “angry people left and right” ahead of midterms, doesn’t mention that one party has a violent extremist group on its side

On October 17, protesters organized by the Republican Party of Miami-Dade, FL, gathered outside the campaign headquarters of Democratic congressional candidate Donna Shalala ahead of scheduled appearances by Reps. Nancy Pelosi (D-CA) and Barbara Lee (D-CA). The chair of the local Republican party was recorded aggressively knocking on the door of the venue as members of the violent extremist group Proud Boys yelled expletives at Pelosi.
As The Miami Herald