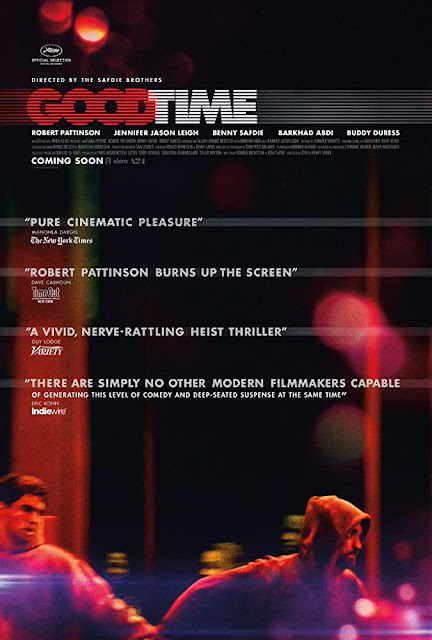 So, there's a new app called Swell, which I was invited to join a few days ago, which I did.  You can discuss any topic you like, via up to five-minute audio recordings.   Today I came across a topic "Reviews," and noticed a review of Uncut Gems, which I reviewed here at the end of May.  I heard a comment there by CaliGooner aka Taylor J, recommending an earlier movie by Uncut creators Benny and Josh Safdie, Good Time.  Which is how I just came to watch this 2017 tonight movie.
Which was flat-out brilliant, worthy of Quentin Tarantino, until the end.  The dialog, the ambience, the situations, the acting - with Robert Pattinson in the lead as bank robber Connie Nikas and Benny Safdie himself as Connie's mentally challenged brother - was a combo of burst-out laughing and roller coaster action.   Connie's resourcefulness, able to think at lightning speed on his feet, and get out of and even improve upon nearly impossible situations, was true pleasure to behold.

In Your House: Beware of Dog
How Universal Basic Income Gets Attra…
Cat Coronavirus Diary – Day 10
Kestrel Lodge campsite
Wuhan Weather Report
Until the end.  When ...
[Big Spoiler ahead ... ]
He gets caught.  Just like that.  And it's no consolation to see that his brother makes out pretty ok in the end.   I'm not a fan of unhappy endings, especially when they happen to characters who deserve much better.  The only remedy I can think of is a sequel, in which we get to see Connie in action and maybe this time succeeding.
In the meantime, I hope you haven't read this spoiler, and you can get to see the highly enjoyable 9/10s of the movie which is a testament to how sheer intelligence triumphs.  On the other hand, if you haven't read the spoiler, you wouldn't get to read that thought.