Padmavat Review – A visually enriching tale with a riveting Ranveer!

Padmavat, formerly known as Padmavati, is a sweeping saga intertwined with melodrama, skilled war duels and a tragic love story. Embellished on a magnanimous canvas , Padmavat duly fits into an impressive repertoire of Sanjay Leela Bhansali,as he delivers an enriching cinematic experience with a grandeur stamped with authenticity.

Padmavat traverses  the tale  of  the ruthless Sultan Allaudin Khilji and his indefatigable obsession  for Rani Padmavati, the queen of Chittor and wife of Maharawal Ratan Singh .The Film serves as an ode to the chivarly and courage of Rajputs, and Rani Padmavati’s honourable death through self immolation. 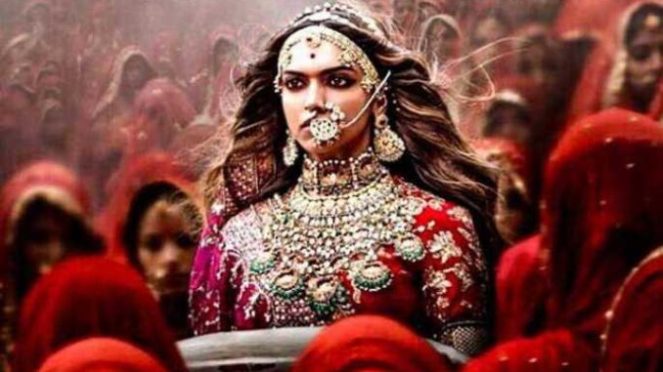 Devoid of the emotional complexities that had crafted the director’s previous historical saga Bajirao Mastani, the script of Padmavat is unidirectional and uncomplicated.  But what’s striking is the way Bhansali lavishes the film with luxuriousness. Each and every frame of the film just appears to be a canvas of richly layered opulence. Equally jaw-dropping are the impressively staged war scenes which are a perfect demeanor of skill and dexterity. The duel in the battlefield between the two male leads is particularly spectacular, keeping the menacing tone intact in sync with the brutality of one of the protagonists.  Bhansali applies the same skill proficiently in the beautifully crafted climax portraying the controversial  “Jauhar “scene, which is the one of the best moments of the film. Keeping the controversies aside related to the regressive depiction of Jauhar, I was thoroughly moved with the poignancy of the entire episode till the credits started rolling.

Both Shahid Kapoor and Deepika Padukone lend authentic credence to their respective portrayals .  As the uptight Maharwal Ratan Singh,  Shahid sincerely puts his charisma to subtle effect, glorifying the impeccable values of Rajput dignity and moral ethics. Deepika, unsurprisingly looks like a dream, and pitches in a competent performance as the upright Queen who prefers death over dishonour .  The chemisty between the two leads though is a bit undecorated, as it tends to drag in certain segments, especially during the second half .

But Padmaavat  is undoubtedly powered by Ranveer Singh and his engaging portrayal of the shrewd and zealot Alauddin khilji.  Ranveer breathes life into the eccentricities of the megalomaniac Khiliji and makes it just impossible to remove your eyes from him whenever he is on screen. Right from the grotesque physicality to his maverick individualism, Ranveer weaves out a fascinating performance with equal measure of repugnance and abhorrence. Its an absolute masterstroke as he pulls the film much notches higher through an engrossing act. He is ably supported by Jim Sarbh as Mallik Gafoor, his obdurate companion who indulges in Khilji’s perverse ideologies.

At an over two hours and forty five minutes, Padmavat is overtly long . But I was hardly bored, thanks to the curiosity value, grand scale and a delectable performance from Ranveer Singh, who keeps you hooked on Alauddin Khiljis ruthless tryst with love. He is the core reason why Padmavat deserves to be seen. Watch him when he goes ballistic in the Khalli Balli song, and you know a superstar has arrived!

Padmavat Review – A visually enriching tale with a riveting Ranveer!