Everything Audemars Piguet creates tends to be overshadowed by the Royal Oak collection, even when it’s equally worthy of the spotlight. But if you look beyond the hype generated by the most collectible models of the RO, you’ll see some of the most interesting watches to come along in the past decade. A fine example in this unsung oeuvre is the rare Frosted Gold Finish series the brand has produced in collaboration with master jeweler Carolina Bucci.

Bucci’s special skill is her mastery of a technique known as the Florentine finish. It’s a method of indenting gold—not hammering, but more like micro-hammering—to create a shimmering sparkle that looks a little like diamond dust. As a jewelry designer, Carolina has spent years perfecting and applying the finish to the surface of her jewelry creations. Audemars Piguet tapped into her talents a few years ago as part of its ongoing initiative to explore a broader world of finishes to apply to the surface of its cases, bracelets, and bezels. The link between the tactile quality of the Florentine finish and the signature brushed and polished work of the Royal Oak’s case and bracelet sparked the idea of a collaboration. 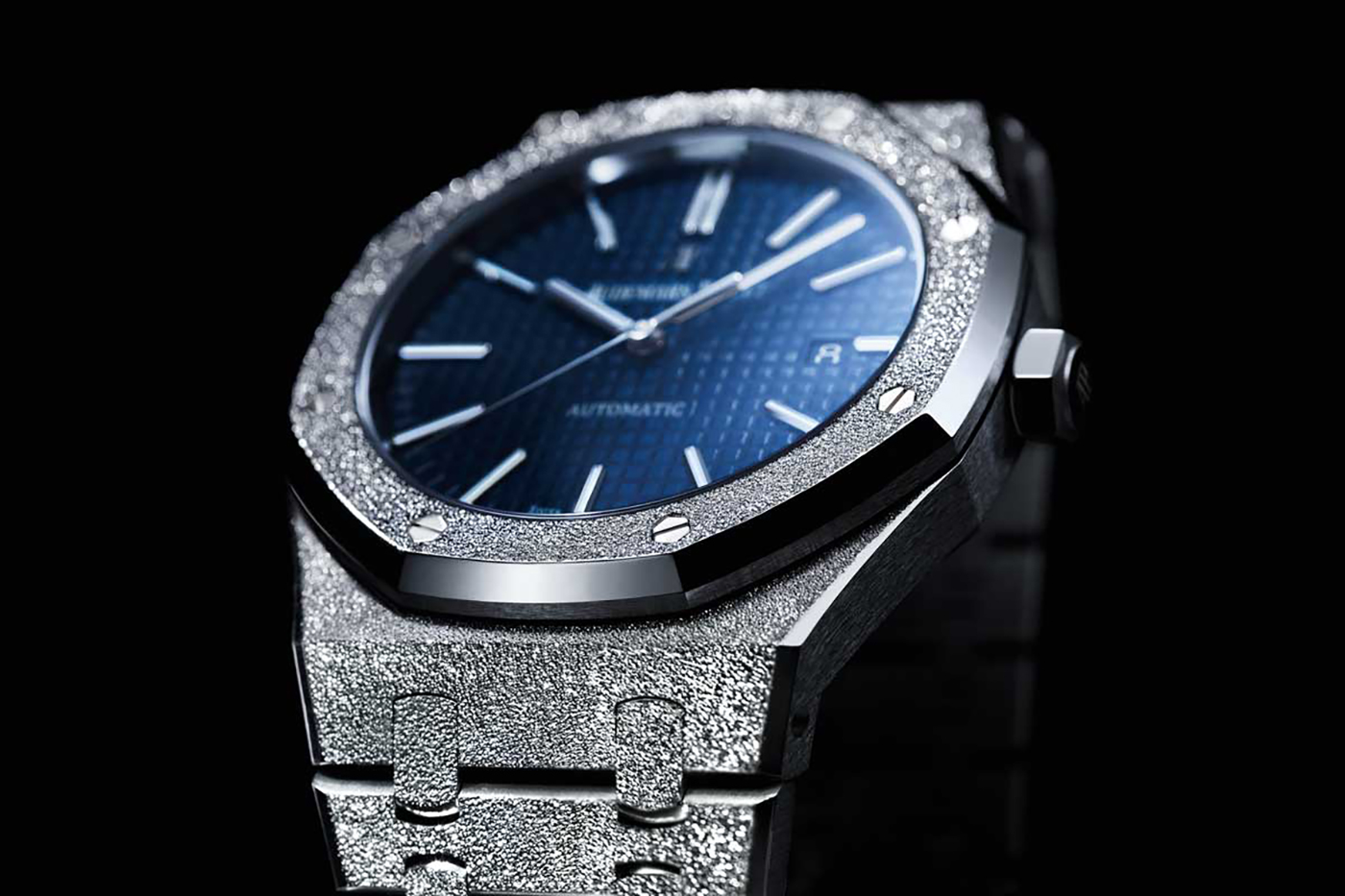 The frosted finish is rooted in an ancient gold hammering technique, also called the Florentine technique, which Carolina Bucci originally used predominantly on smaller pieces. The process is carried out by hand, using a diamond-tipped tool to beat the gold, creating tiny indentations on the surface. The result is a sparkly effect that resembles the glittering surface of freshly fallen snow sparkling in the sunshine. In recent years, Bucci has used the effect in a bolder way on larger cuffs and pendants, highlighting the finish as an essential element of the overall design. Applying it to a gold watch seemed like the next logical interpretive step.

The challenge for Audemars Piguet’s craftsmen in translating the finish to watches was finding a way to apply the technique across the case and bracelet without altering the clean lines that define the Royal Oak’s form. The original gradating style of the bracelet construction also demanded that the order in which the rest of the finishing (polishing and satin finish) is executed be reconsidered. It took months of trial and error between Bucci’s Florentine craftsmen and Audemars Piguet’s manufacture to get the combination just right, ultimately altering the surface of the gold to sparkle with a frosted finish while retaining the softness and flexibility of the Royal Oak’s signature bracelet. 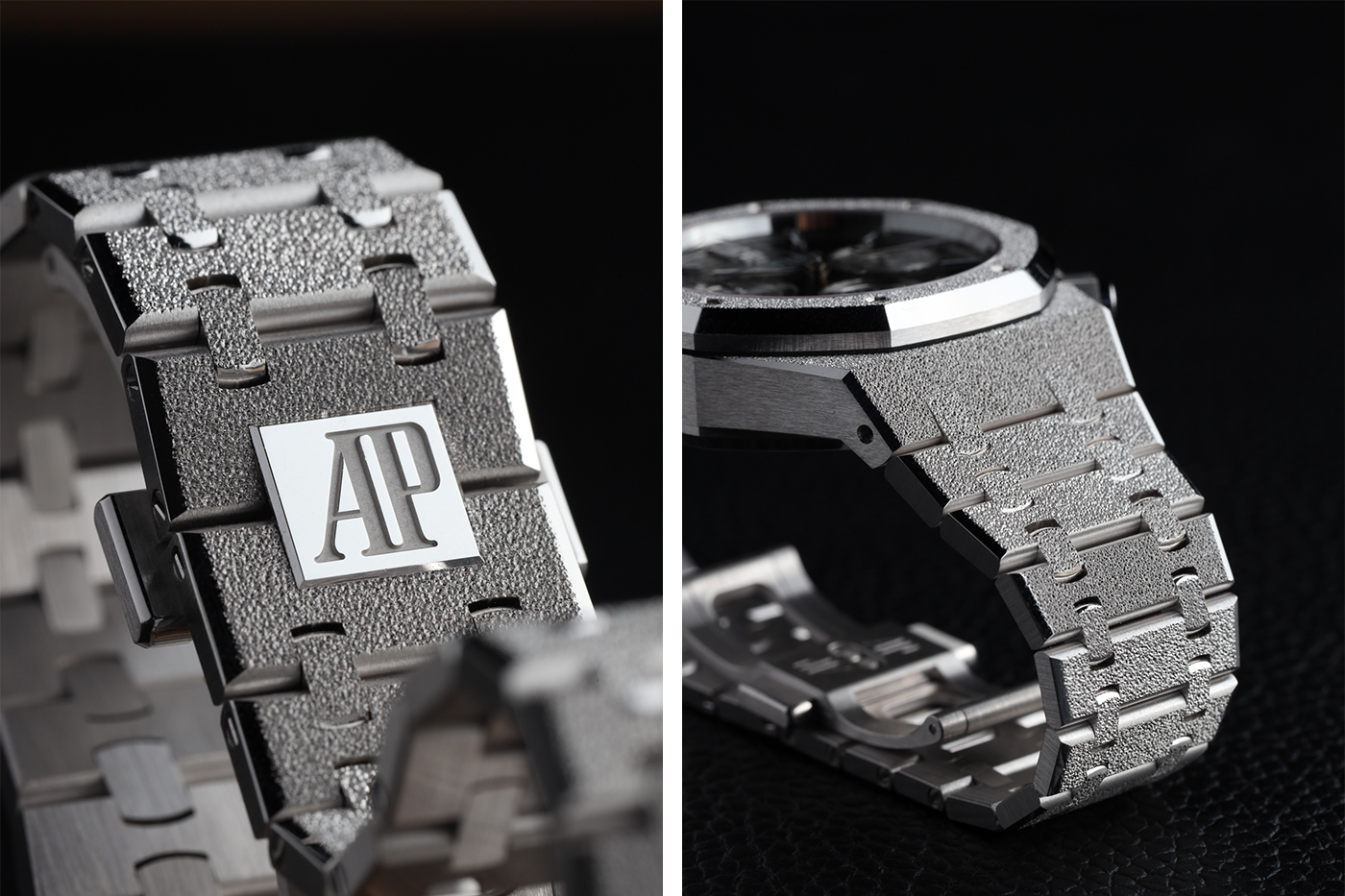 “It was a very delicate alchemy to operate,” said Audemars Piguet in a statement following the first introduction. The degree of finish on each surface was carefully calibrated and applied sparingly even, yet the watch was transformed.

The collaboration came to fruition in 2017 on the occasion of the 40th anniversary of the ladies’ Royal Oak collection. It was applied to 37mm and 33mm sized ladies’ versions of the Royal Oak, with both white and rose gold options. Bucci’s goal was to give the Royal Oak an appeal that “captured attention from a distance, injecting feminine sensibility while retaining the key design codes of the original piece.” Mission accomplished. The finish seems to particularly compliment the grand tapisserie pattern on the dial, another Audemars Piguet signature, which has a texture and a sheen of its own. 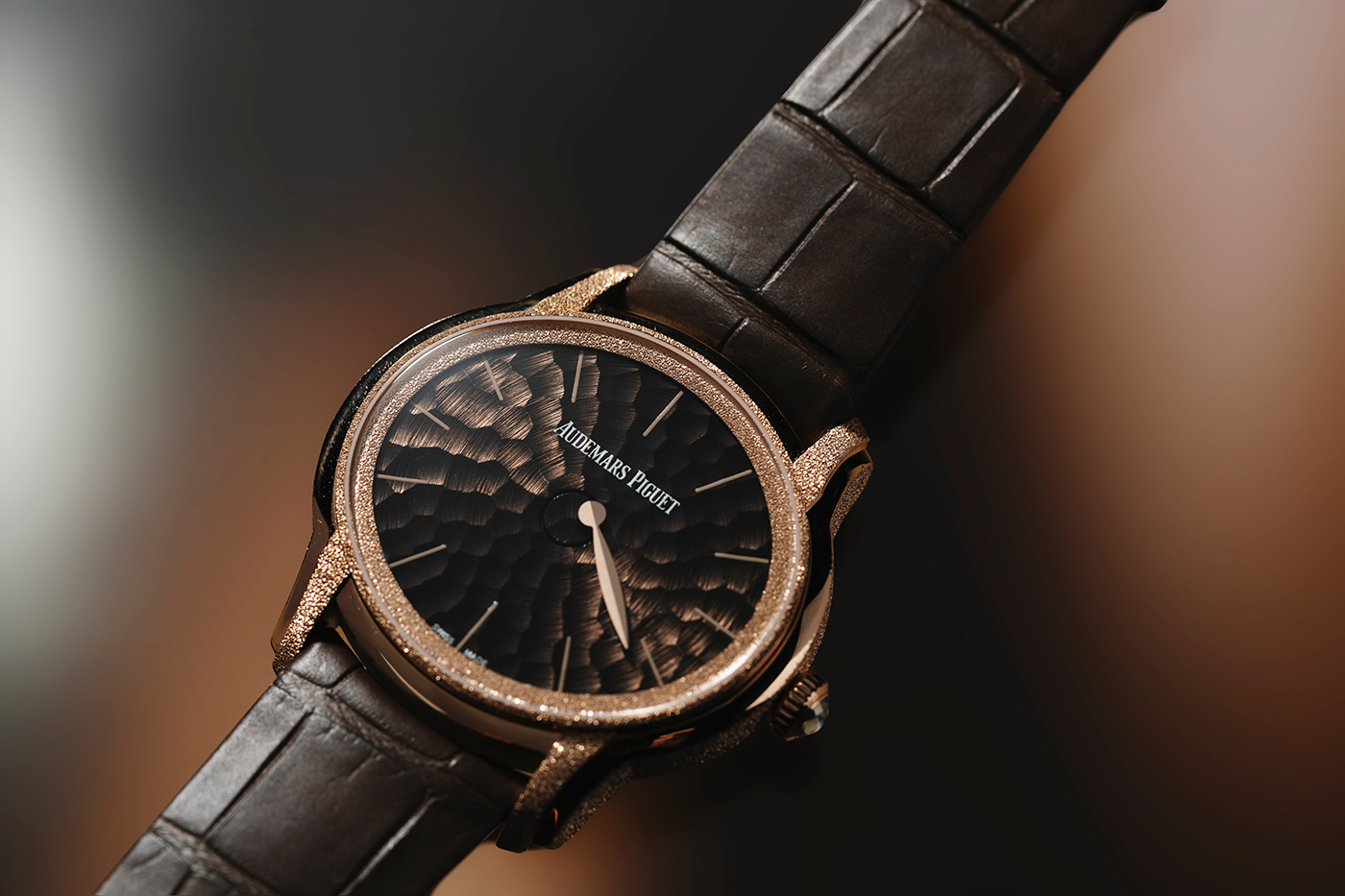 A year later, in 2018, the Frosted Gold Finish was applied to a new model, Reference 77244OR.GG.1272OR.01, this one in the Millenary collection, Audemars Piguet’s dedicated ladies’ line with the signature elliptical case. The Florentine finish was the perfect surface treatment to pair with the shimmering white opal dial, with its natural play of color and light. That same year, the finish appeared on the case, bezel, and bracelet of the Royal Oak Double Balance Wheel Openworked Reference 15466BC.GG.1259BC.01, a 37mm watch considered either men’s or women’s. In addition to the unique finish, the watch had a unique mechanical feature: it incorporated two balance wheels and two hairsprings assembled on the same axis, a mechanism that improves precision and stability.

In 2019, Audemars Piguet and Bucci applied the concept to another mechanically noteworthy watch, the Millenary Philosophique Reference 77266. The watch was a one-hander, with caliber 3140 powering a central hours hand, leaving the wearer to discern the minutes according to how close it crept toward the next hour. In some ways, it was a vintage remake. Audemars Piguet introduced its first hand-wound Philosophique watch in 1982, which they say, “referred back to the beginning of time measurement devices, which were equipped with a single hour hand until the beginning of the 18th century. By telling time philosophically and with a view to history, the manufacture liberated time from the constraints of the modern industry’s relentless quest for precision.” 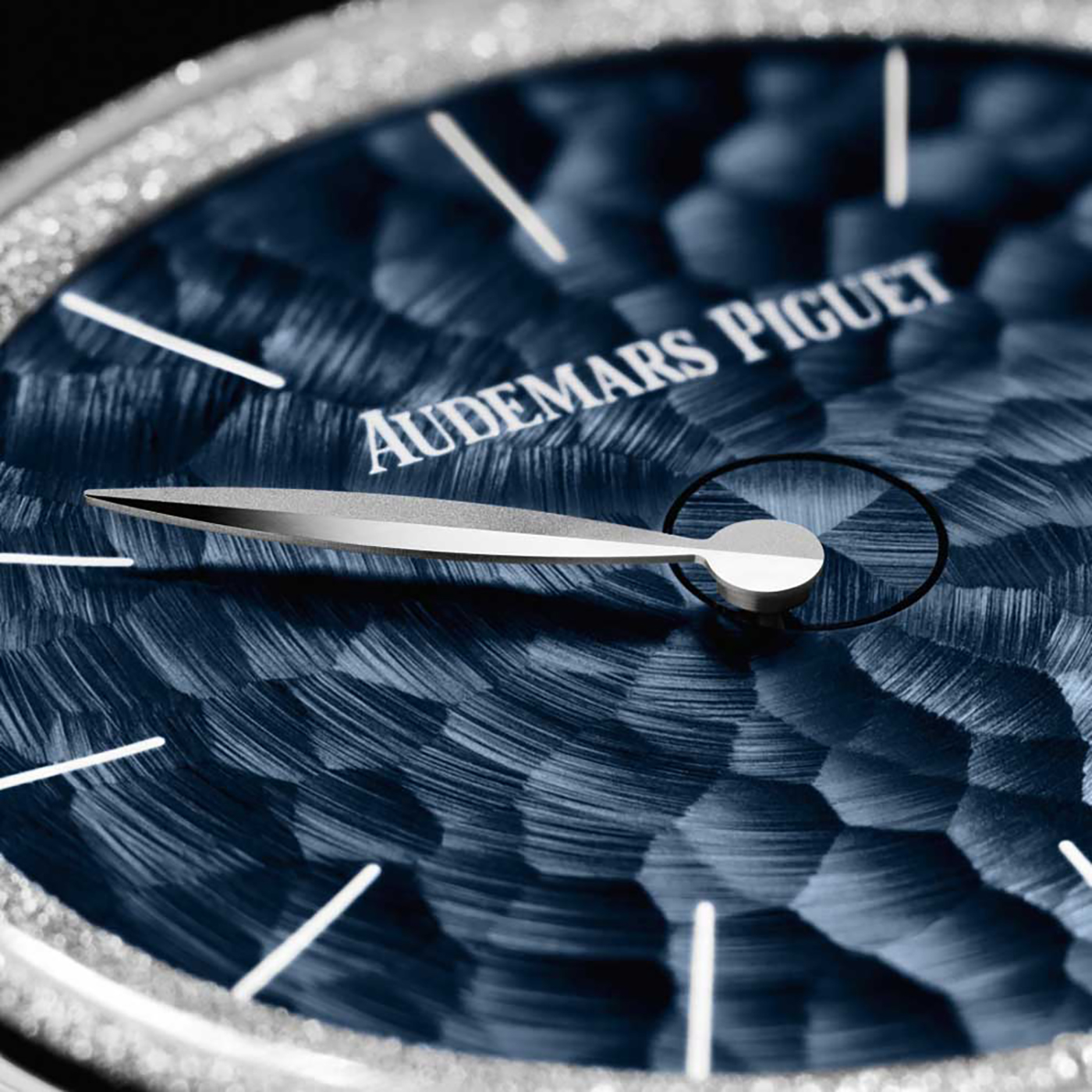 Another Millenary introduced that year was the Frosted Gold Aventurine Reference 77244BC.GG.1272BC.01. This time, the sparkle of the Florentine finish was paired with the similarly sparkly features of aventurine on the dial. Aventurine is a man-made mineral-like glass, originally created by adding copper filings to cooling molten glass, resulting in a burst of sparkling particles. Today, it is made by adding black copper oxide and cobalt, which colors the glass a deep blue. The mesh gold bracelet, another rarity in the world of high watchmaking, added a distinctive vintage touch.

Audemars Piguet Frosted Gold pieces are not easy to find today, which is understandable since each requires hours of meticulous micro-hammering. Only a limited number have been made. Alas, one of the hallmarks of high watchmaking is the element of rarity, and that is part of the appeal. These ones are worth watching for.

This post first appeared on Watchbox |, please read the originial post: here
People also like
What You Need to Know About Sydney Epoxy Flooring
What is enzyme immunoassay