WatchBox & Langepedia: How A. Lange & Söhne Revived the Chronograph The Swiss watchmaking industry was built upon the division of labor. The story of farmers in the snowy mountains spending their winters producing watch parts for the established firms is almost as famous as the country’s cheese. Ferdinand Adolph Lange from Glashütte, Germany was also an adopter of the system. When he built A. Lange & Cie in 1845, he asked his craftsmen to work with him for 5 years, and then showed them the path to establish their own specialized shops to offer the parts of the highest quality.

This tradition continued in the watch industry well into the late 1990s, with specialists supplying the firms. Firms would acquire the mechanism from one place, the dial from another, the hands from yet another and combine and finish them under one roof. But a considerable part of the allure of watchmaking is the story: the fusion of art, how the name you see on the dial crafted the watch’s beating heart, and, perhaps, how it did this better than anyone else. This last part was partly missing from the story of watchmaking– until someone else arrived from across the border.

Following the re-foundation of A. Lange & Söhne in 1990, it was clear that Günter Blümlein, the legendary co-founder of the brand, wanted to do things differently. Be it the groundbreaking and now iconic design of the Lange 1, or the first wristwatch with the tourbillon and fusée and chain combined, Tourbillon Pour le Mérite, A. Lange & Söhne came to make a difference. In the following years, we have seen pieces like Langematik, Cabaret but one timepiece in particular made an impact like no other. The kind of piece neglected for decades by the big houses, made by a company merely 9 years old: the Datograph. 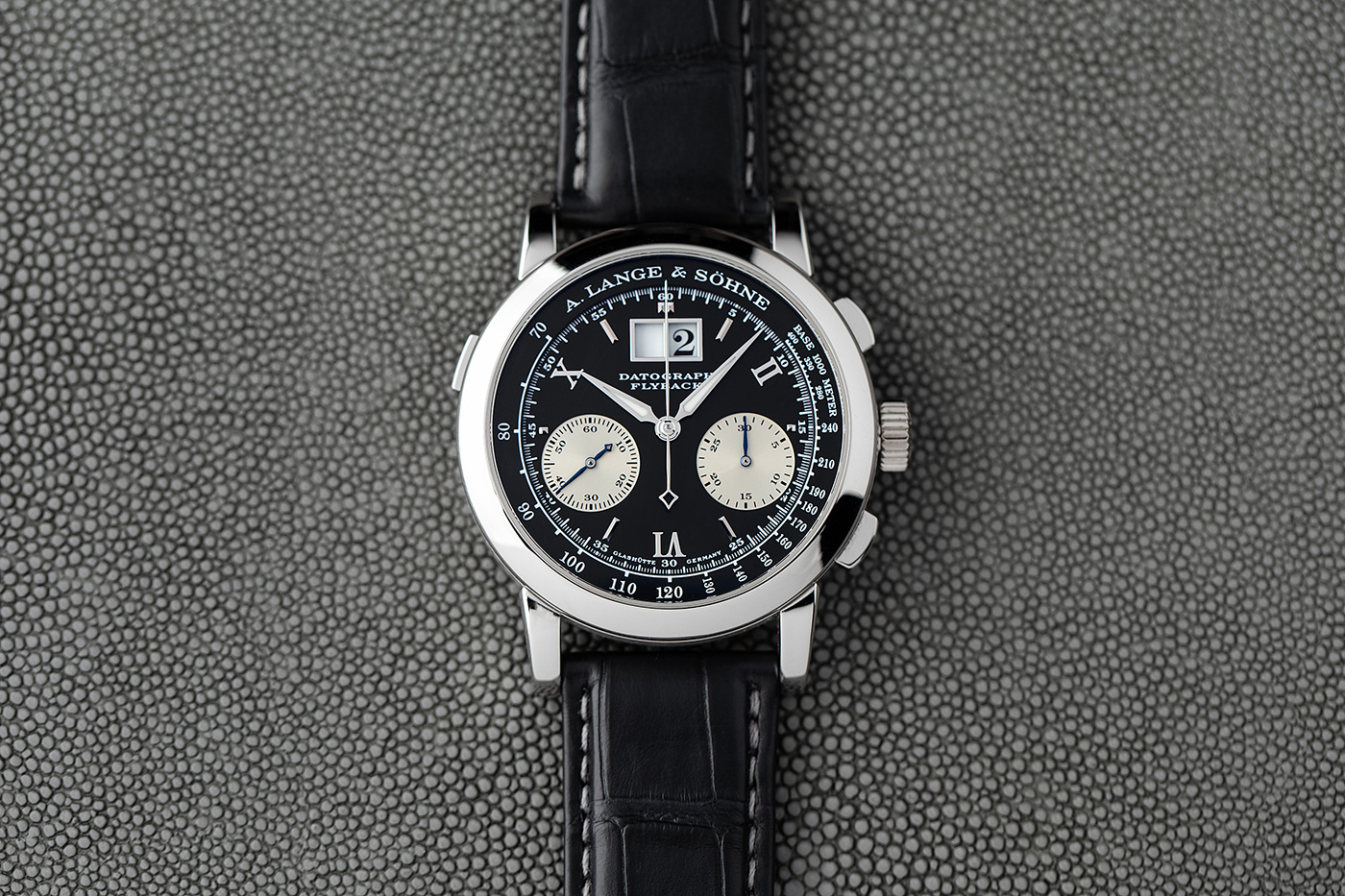 In hindsight, we see that it was Blümlein (also the CEO of JLC and IWC) who saw the trend coming. Lesser known, it was Jaeger-LeCoultre who introduced the first in-house chronograph after decades, Kaliber 829 in 1996. Yet, the Datograph was, just as it was intended to be, different.

Its character is formed by its case structure. Measuring at a 39 mm in diameter and 12.8 mm in thickness, the Datograph is a heavy lump of platinum on the wrist. Constructed on a three-step case with alternating finish, matching pushers and completed with notched lugs, the Datograph feels like a tank made by an artist. It doesn’t have a romantic flow like a Swiss watch, but a rather straight look, like a German engineering product.

Speaking of matching pushers, just give them a try and tell me they’re not the smoothest chronograph pushers you have ever felt. 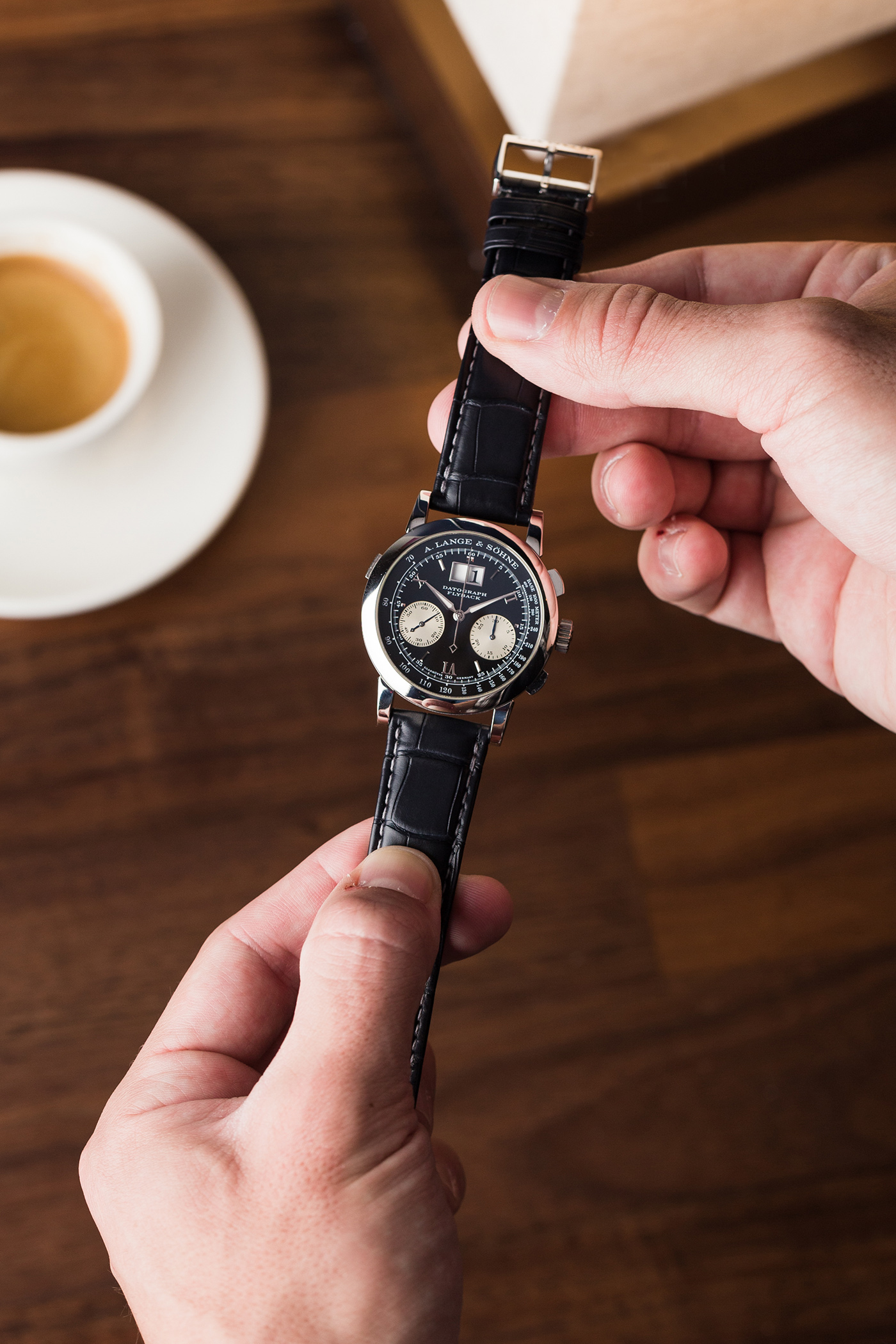 The Datograph’s dial is as defined as its case, formed with mathematics. Walt Odets once said, “this is like a child that only an engineer mother would love, yet far from being soulless.” This was a completely new chronograph look.

Indeed, we had seen Roman Numerals on a chronograph before, Patek Philippe’s amazing 1463, though in a very subtle way. But this was the first time we had seen such a bold look from a chronograph. The thick Roman Numerals were only enhanced by the signature big-date, inspired by the 5-minute clock of Dresden Semper Opera House, made by none other than Ferdinand Adolph Lange’s teacher, Gutkaes.

Such geometry coupled with A. Lange & Söhne’s signature typography, and we have something utterly characteristic, original and dare I say, timeless. No other chronograph compares when it comes to looks. The the individuality of its design, to me, solidifies its importance. Perhaps leave here with the original text? “No other chronograph compares” kind of feel like this is the best one? Instead I tried to say just you say in the next sentence, its individuality of design.

Despite all of my praise for the Datograph’s case and the dial, these two aspects are not even the main attraction of this magnificent piece. It hides on the back side, waiting to be discovered by curious minds, and to be appreciated by anyone with the slightest taste in aesthetics. As you can see, this is not so much a watch review as an opportunity for me me to ramble on about one of my crushes…

The chronograph is a monumental complication on its own. Albeit mass-produced for decades, a reliable, novel, and a good-looking chronograph caliber can be more demanding than a tourbillon construction – hence why established houses relied on outsourcing. However, that was not the Lange, nor Blümlein way. As a newly re-established historical maison, Lange had only one choice: Do what others don’t, in your own way. Caliber L951.1 was introduced in 1999 after 4 years of work.

The caliber L951.1 is a horizontal-clutch column-wheel flyback chronograph movement that beats at a traditional 2.5Hz, offers 36 hours of power reserve and comes with a precise jumping minute counter – much like the Longines 13.33Z as documented by Dr. Christian Müller. From a technical perspective, it is not the most novel movement ever made. Though when it comes to its finish and construction, it’s marvelous.

The caliber l951 measures 30.6 mm in diameter inside of which,  405 parts breathe in harmony. Within this space, one can find 9 different finish techniques, applied with great care considering the functional nature of the parts. Let’s take a tour.

Then we have the coupling system with the seconds wheel beneath and, since it is a static part, flat polished steel on top.

Moving on, the coupling clutch lever and the remainder of the chronograph levers are straight grained in-keeping with the rather active nature of the parts.

The contrast between the smooth surfaces of the rather static pieces and the industrial outlook of active components is just delightful.

Continuing, we see striped bridges made of German Silver and solarized chronograph seconds wheel in the center. Of course, other traditional touches such as the blued screws and gold chatons are ever-present.

The construction is three-dimensional and shows a thorough aesthetic consciousness. What do I mean by this?

The working principles of a chronograph movement, or a basic watch movement in this regard, are not a secret. There are two ways of executing this movement: One can build a straight transmission with straight levers and bridges and make it work. Or, one can make a functioning chronograph but with curves and angles, providing surfaces upon which to apply various finishing techniques, to create a sculpture in motion. The Datograph is the latter.

In the end, this is a movement worthy of praise from Philippe Dufour himself, as the best-looking chronograph movement ever made. Do my words even mean anything next to that?

The first generation Datograph was produced between 1999 and 2012, in platinum and pink gold. The main references are:

Even for a relatively small manufacture like A. Lange & Söhne, 12 years of production is long in modern times. But true to A Lange & Söhne’s motto, Never Stand Still, in 2012, the Datograph got its long-rumored upgrade: Datograph Up/Down. 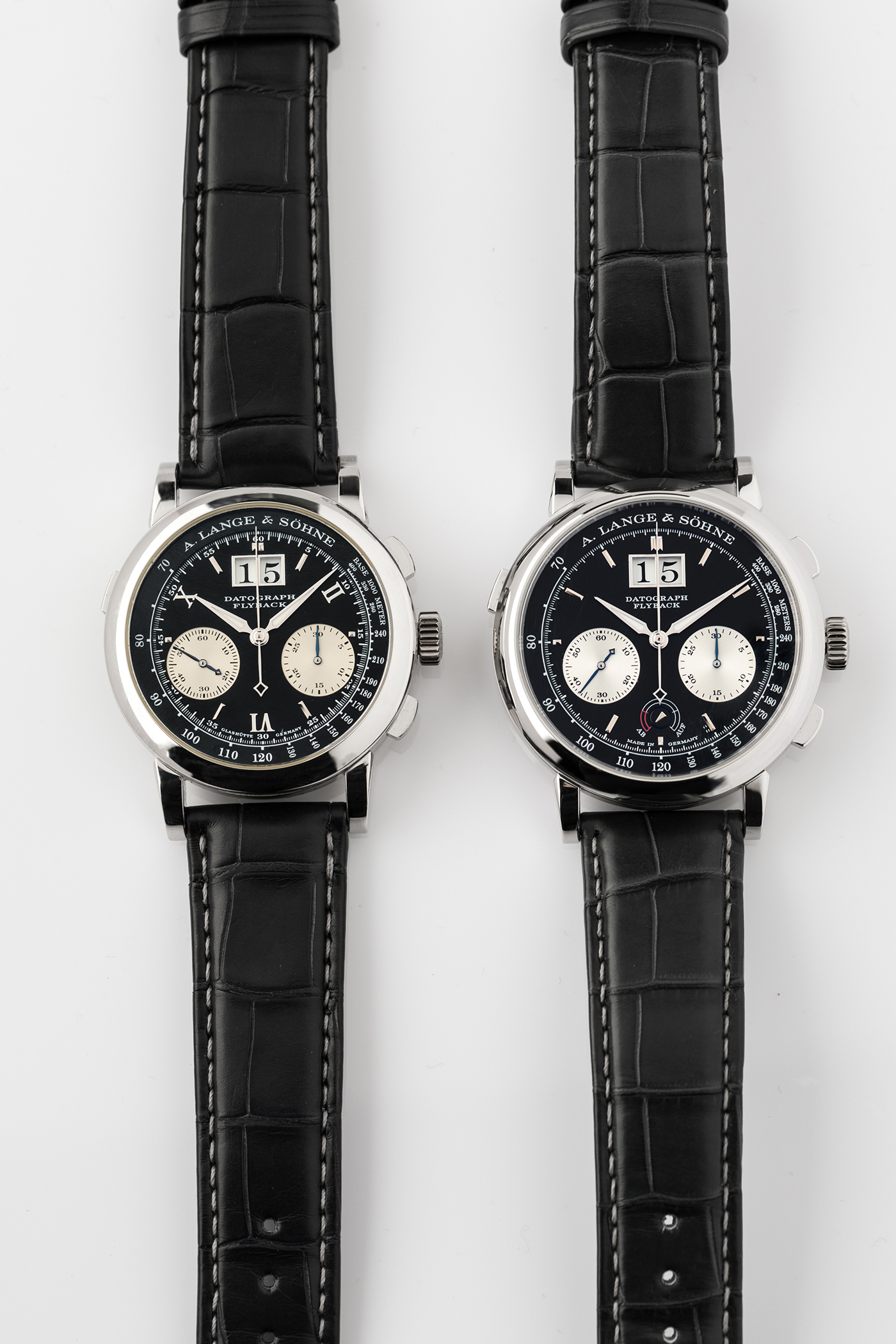 With the update, the Datograph became more mainstream, less aggressive perhaps and easier going. Gone were the Roman Numerals, which were similarly removed from the Datograph Perpetual in 2010. With baton indices, the dial breathes easier… Again, we saw a similar update to 1815 Chronograph in 2010 with the removal of the pulsometer. At the time, simplification was the name of the game at A. Lange & Söhne, and the Datograph played its part. After 10 years I can say that it played very successfully!

With the removal of the Roman Numerals, the design lost the equilateral triangle that balanced out below the center sub-dials. Gravity’s effect is more apparent, though this is far from a deal breaker for the Datograph Up/Down. Its sub-dial and big-date size was re-arranged beautifully to handle such a tweak, and it works wonders. It is still the same watch with the same soul, but with a different approach. That’s how you update an icon.

While the case structure stayed the same, the diameter increased to 41 mm along with 0.3 mm in added thickness. Obviously, even the Datograph was not immune to the trends.

One note here, the Datograph Up/Down is the more comfortable of the two thanks to its revised proportions and lug profile.

The beating heart is of the Datograph is now the caliber L951.6 instead of the L951.1, meaning that this is the 6th variant of the movement. Endowed with a myriad of technical upgrades such as the in-house balance wheel with eccentric poising weights, in-house balance spring, and 60 hours of power reserve instead of the previous 36, the L951.6 preserves all the beauty of its predecessor. 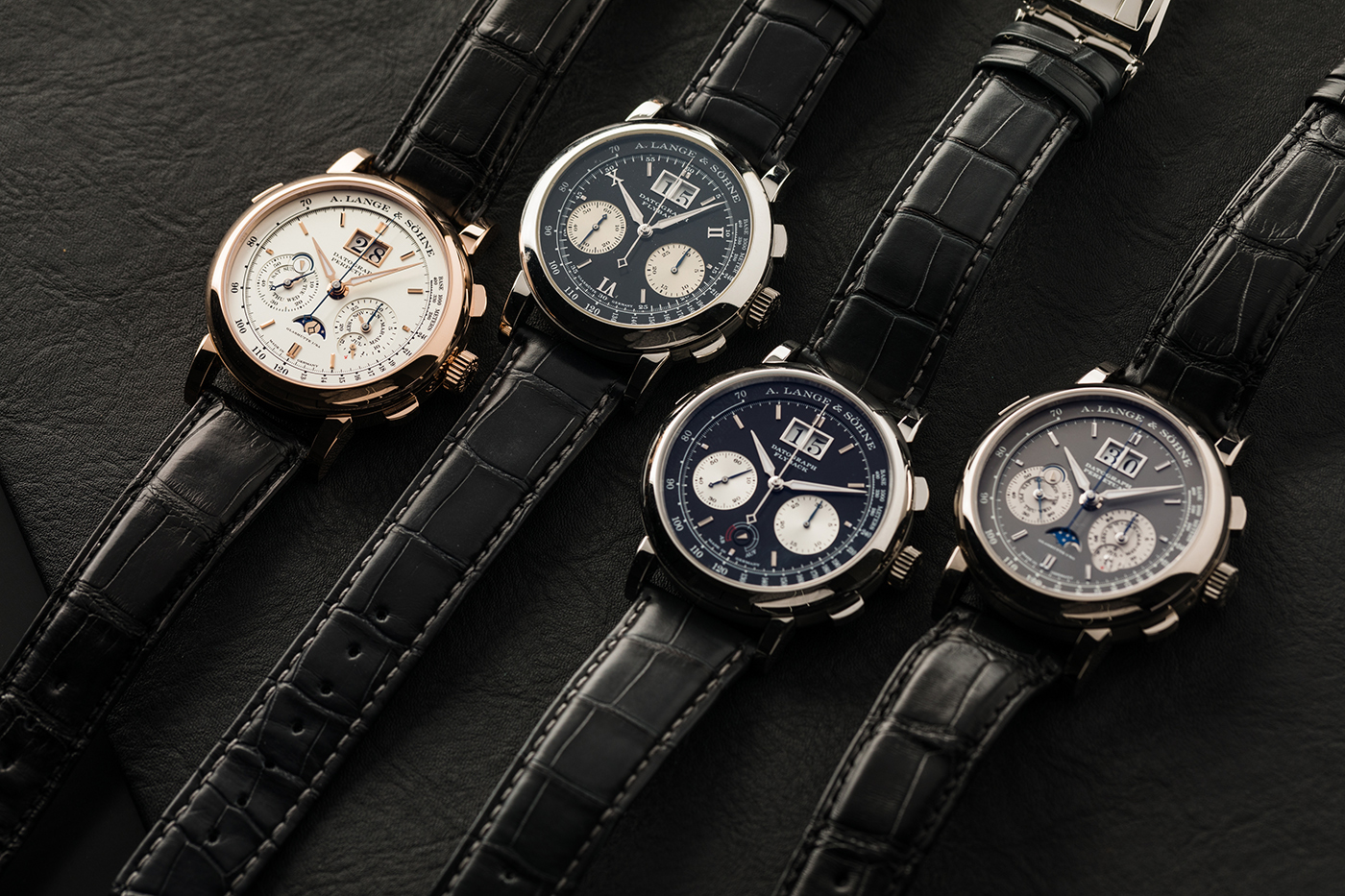 The Datograph was born from where it was least expected, a small village in eastern Germany and marked its name into the history of watchmaking with golden letters, both with its beauty and its primary consequence: the in-house mechanism trend.

For 20 years the masses neglected these pieces, which was fortunate for many, since the watchmaking you got for the price was next to nothing compared to the usual suspects. And now, as of 2020s, the Datograph is finally enjoying its much-deserved fame. This is a piece of art that must be cherished, and I hope I this article has shown you why.

Please don’t hesitate to contact me via [email protected] for any questions you might have or simply to chat.

The post WatchBox & Langepedia: How A. Lange & Söhne Revived the Chronograph appeared first on WatchBox.

This post first appeared on Watchbox |, please read the originial post: here
People also like
11 things to do on vacation with out the kids
Why SEO Is The Next Big Thing in the Real Estate Industry
The Queens of Pop: In The Mix
Common Problems with Slit Lamp and Repair Needs
30 Cheap & High ROI Home Renovations (And 5 Costly DIY Mistakes)
What You Need to Know About Sydney Epoxy Flooring
Nie daj się oszukać, hakerzy z Rosyjskim akcentem atakują

WatchBox & Langepedia: How A. Lange & Söhne Revived the Chronograph