Everything You Need to Know About the Rolex Submariner

A watch that has stood the test of time with minor improvements over the years has become an icon in the watch world and a highly sought-after Model. What makes this watch desirable? You’ll learn more about the history of the Rolex Submariner, technical features, and pricing in our guide to give you a better understanding of the icon.

Why SEO Is The Next Big Thing in the …
Legit Way To Make Money Online
React JS, Node JS & Angular JS: Which…
Businesses can be revolutionize
GALA DALI – THE MUSE OF THE SURREALIS…

A Brief History of the Submariner

The Submariner was introduced in 1953 and was designed for divers. Diving recreationally was still developing in the 1950s. Jacques Cousteau produced underwater films that would help push Scuba diving to the mainstream and even had an influence in the design of the Submariner.

While not the official first dive watch, the Rolex Submariner was the first watch to be 100m waterproof and had a rotatable bezel for divers to read. Early models featured bidirectional rotating bezels due to a patent from Blancpain. Before the model was for sale, it had undergone 5 months of testing by the Institute for Deep-Sea Research in Cannes.

The reference 6204 is the first Rolex to feature the ‘Submariner’ branding on the dial. The 37mm watch featured pencil style hour and minutes hands paired with a lollipop style seconds hand and was thinner than later models. The references 6205 and 6200 were released at the same time as the 6204. The 6200 featured a higher water resistance of 200m compared to other references. 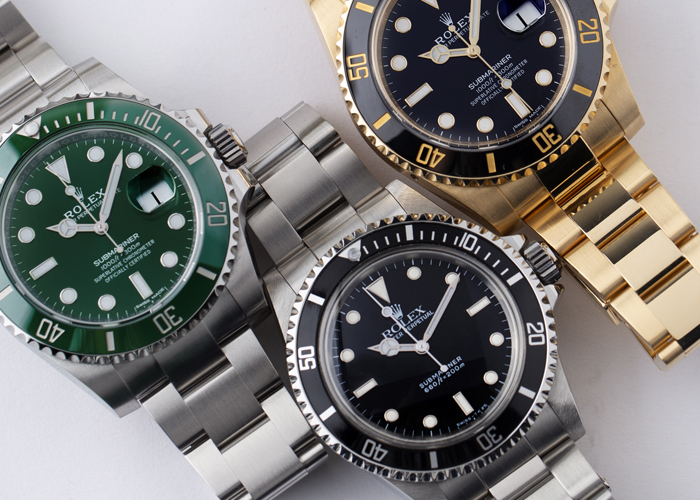 Evolution of the Model: Improvements Over the Years

There have been small updates to the watch over the years. The watch has been in production for over 67 years so it continues to improve and change with the developments in watchmaking.

With the introduction of the reference 5512 in 1959, we start seeing the Submariner look more like the modern watch we know today. The case size expanded from 36mm to 40mm, crown guards were introduced, the ‘Mercedes’ style handset was in use, and the “Superlative Chronometer, Officially Certified” phrasing on the dial first appeared. The 5512 was in production until 1979. 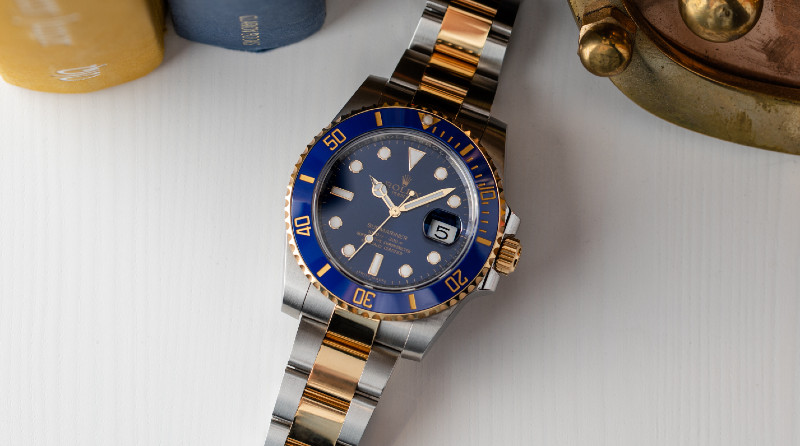 The addition of the date function on the watch, in 1969, was notably the most significant change in the early history of the model. While adding a date may seem minor, it helped transition the watch from a pure tool watch for divers to a status symbol and collectors watch. The date feature provided daily practicality for collectors.

In the early 1980s, the five-digit references were introduced. With this change, updated movements were introduced, sapphire crystals were now being used and the water resistance increased from 200m to 300m.

Aluminum was also replaced for Cerachrom on the bezel in 2009 and was first seen in the two-tone reference 116613LB. This provided a fade-proof and scratch-proof material on an area of the watch that often sees bumps.

Another major update to the collection was in 2010 when the new six-digit series was introduced. The most notable update came when the collection grew to the ‘Super Case’ design. The lugs and crown guards expanded in size, and while the watch still measured 40mm, the watch appeared bulkier.

Dial color had been used since the early 1970s, on the gold 1680 and on a Rolesor 16803, but it wasn’t until 2003 when Rolex was celebrating the 50th anniversary of the model that green was introduced. Skip down to notable references to learn more about this green addition. 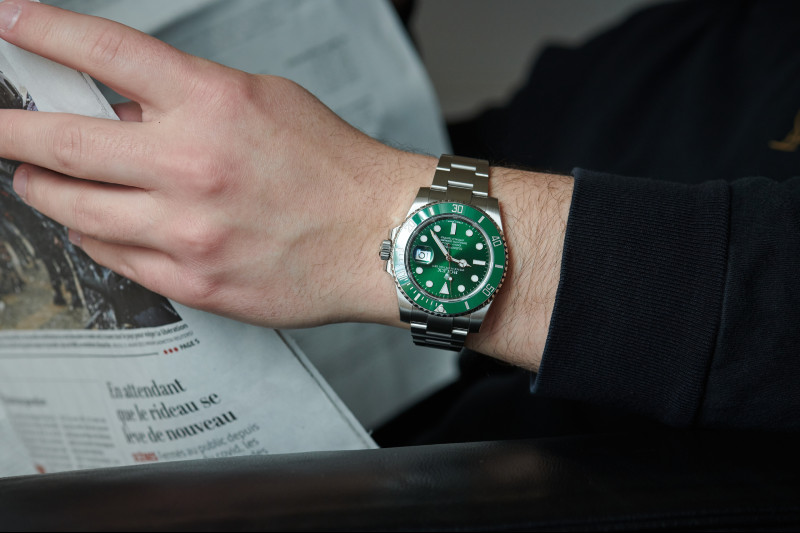 2020 Updates to the Submariner

Most recently the Submariner family has undergone another update in 2020. The six-digit references were updated to the 12661X and the 124060 and the watch increased to 41mm. The movement was also updated to the caliber 3235 for the date version and the caliber 3230 for the no-date model. 2020 saw the retirement of the beloved Rolex Hulk and re-introduced a black dial/green bezel model, and also saw the re-introduction of a black dial/blue bezel model. The watch is still offered in Oystersteel, Yellow Gold, Rolesor, and White Gold.

Why Buy a Rolex Submariner

A Submariner is a versatile watch, and it has been that way since it was first released. The design is simple, functional, and sophisticated at the same time. It has been worn by James Bond and celebrities alike and is one of the most recognizable watches.

The almost 70-year history of the Rolex Submariner has led to quite a few references being released over the years, some with longer productions than others. Here are just a few of the popular references. 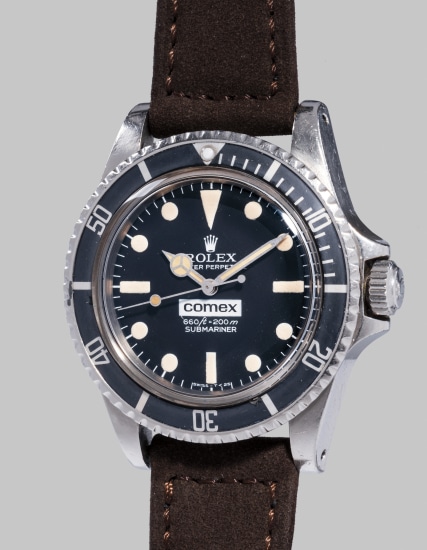 The French diving specialists, COMEX, were experiencing issues of helium bubbles inside their cases. They turned to Rolex who developed a Helium Escape Valve with Doxa. COMEX commissioned a number of these models and it is thought that there are only about 150 of the models available today. 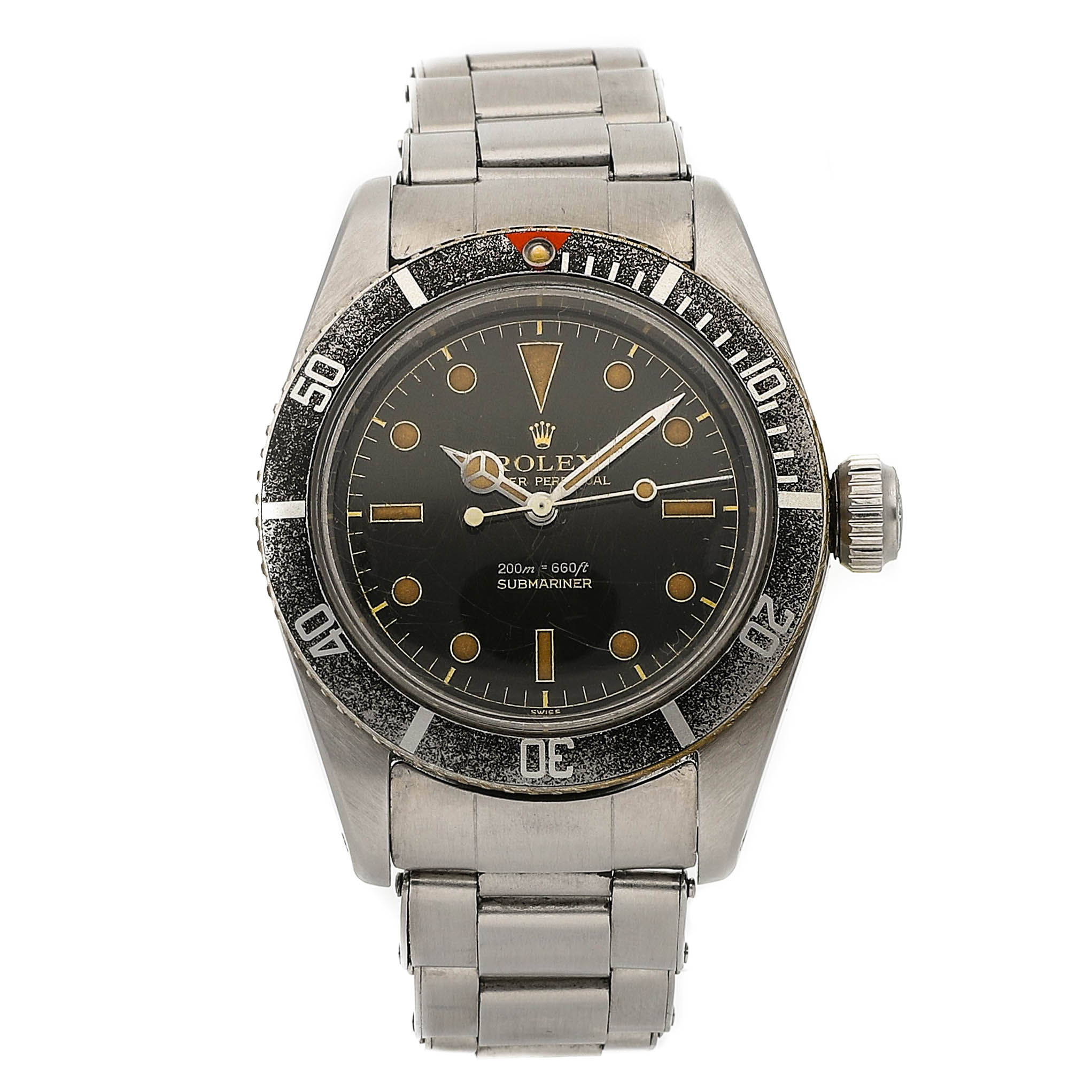 The first Rolex worn by James Bond was the reference 6538, a Submariner with no crown guards and an oversized winding crown. The Bond watch was actually owned by Sean Connery and led to seeing other Rolex models on 007 in later films. 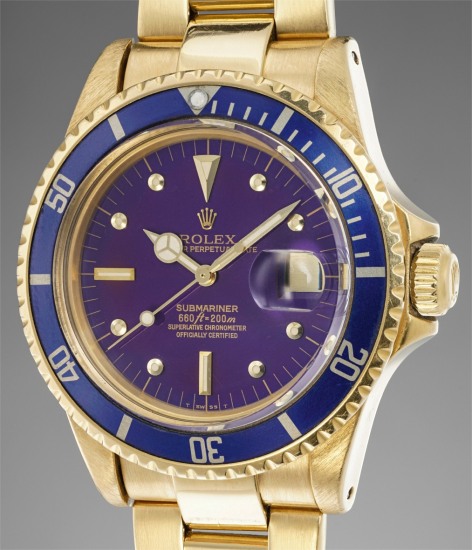 With the success of the first yellow gold Submariner in 1969, Rolex released the blue dial/blue bezel variant in 1971. Over time the aluminum bezels, and even the dials, have faded to various shades of blue and purple. 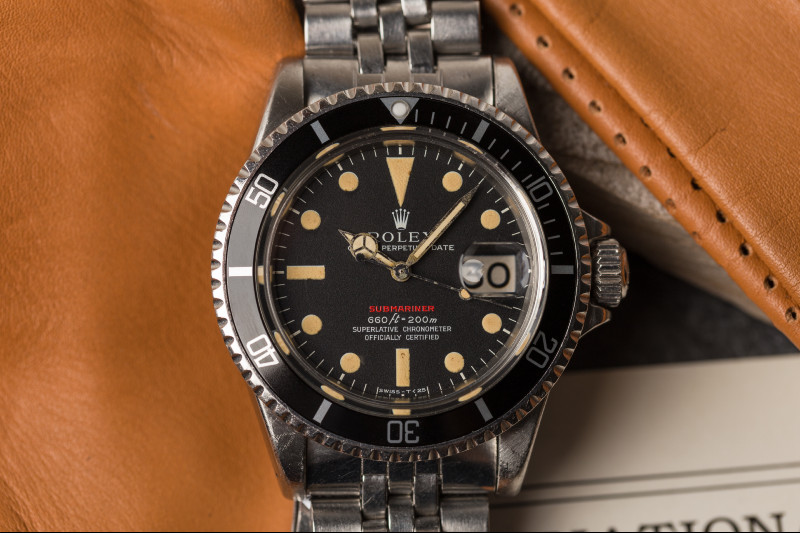 For a brief period of time, the Rolex Submariner was released with red ‘Submariner’ lettering on the dial. This model has become increasingly sought after by collectors due to the short production time and the fact that the dials were often replaced during servicing. 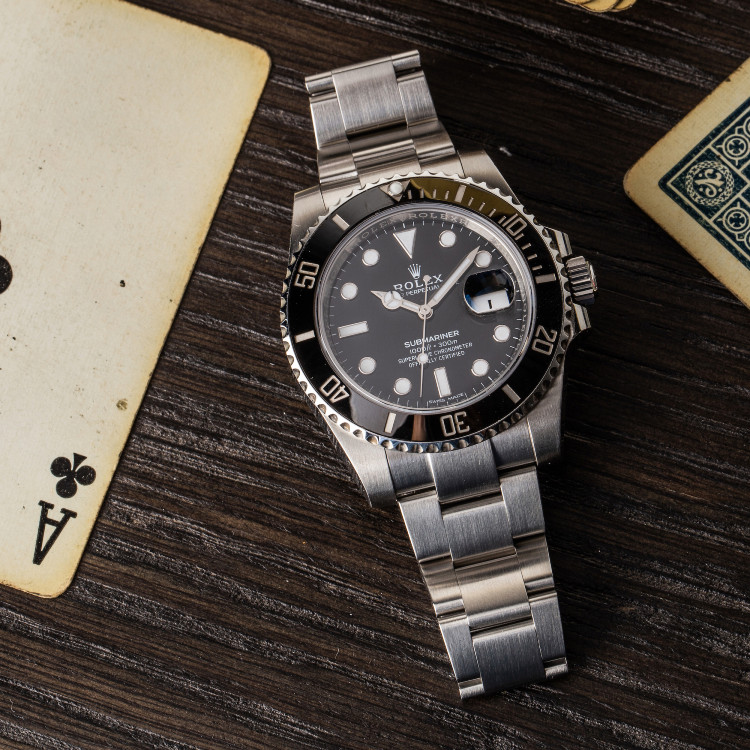 One of the most popular, and long-lasting references, the Rolex Submariner 16610 is a favorite among collectors. This date version features the classic 40mm dial, luminescent hands, white gold circled hour markers, and a sapphire crystal. The 21-year production and versatility have seen this watch scuba diving, at black-tie events, and everything in between. 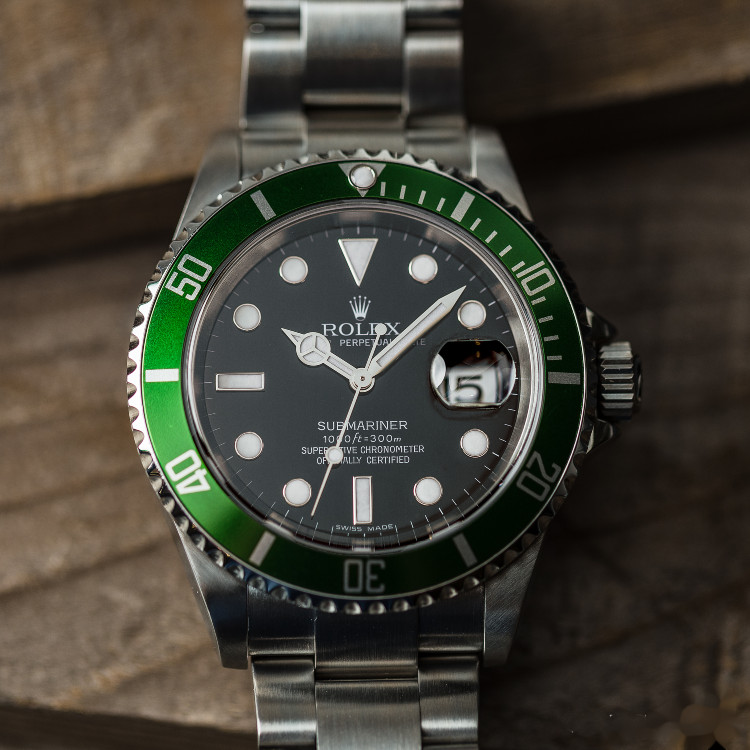 To celebrate the 50th anniversary of the model, Rolex released the 16610LV. For the first 50 years of the watch, stainless steel models were only produced with a black bezel. The LV in the reference is Lunette Verte, French for ‘Green Bezel’. Collectors have nicknamed the watch the Kermit. The Maxi dial with larger dot indices was also introduced in this model. 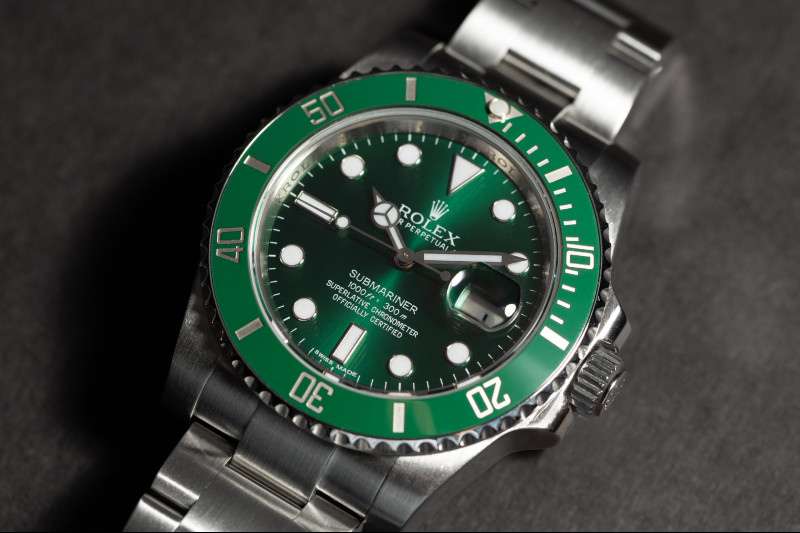 Replacing the Kermit, Rolex introduced the 116610LV ‘Hulk’ in 2010. This model featured a green dial and a green ceramic bezel. This model was nicknamed after the Marvel superhero, the ‘Hulk’. As with the updates in 2010, the model is slightly larger than the Kermit also leading to the ‘Hulk’ nickname. This was discontinued in 2020 and was replaced by the 126610LV. 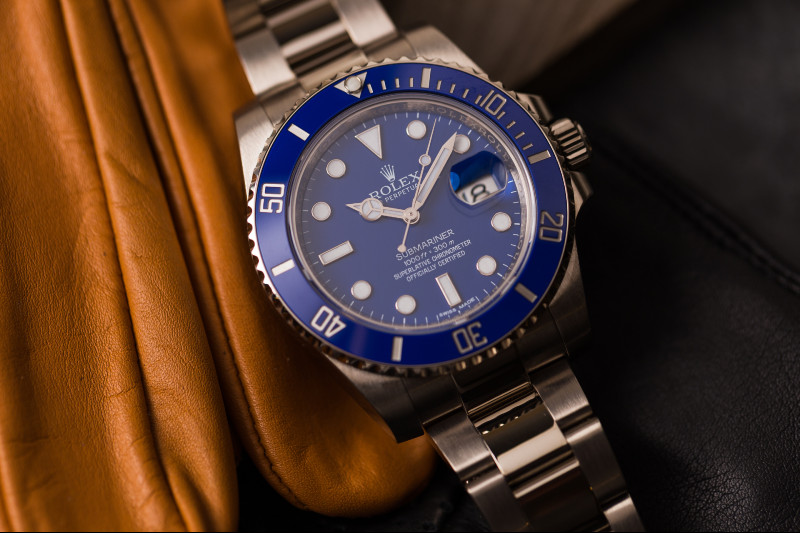 The first white gold submariner made its debut in 2008 in the reference 116619. This model had a bright blue dial and a matching blue ceramic bezel. The watch celebrated 2 different anniversaries for the brand; the 65th anniversary of the Submariner and the 100th anniversary of Rolex. While Rolex had started in 1905, it wasn’t until 1908 when ‘Rolex’ was first used. This watch was nicknamed the ‘Smurf’ with its bright blue and white coloring being reminiscent of the characters. This reference was also discontinued in 2020 and was replaced by a new white gold model with a black dial and blue bezel.

The price of a Rolex Submariner will vary between the new and pre-owned market. A new model has a retail price starting at $8,100 for steel, no-date variant and increases to almost $40,000 for the white gold black dial/blue bezel version.

On the secondary market, a Submariner starts at around $10,000. There are a number of factors contributing to the price. The reference number, materials, box, and papers can all influence the price of a model. Most Submariners on the pre-owned market retail between $12,000 – $20,000 with precious metals and gemstone versions higher. 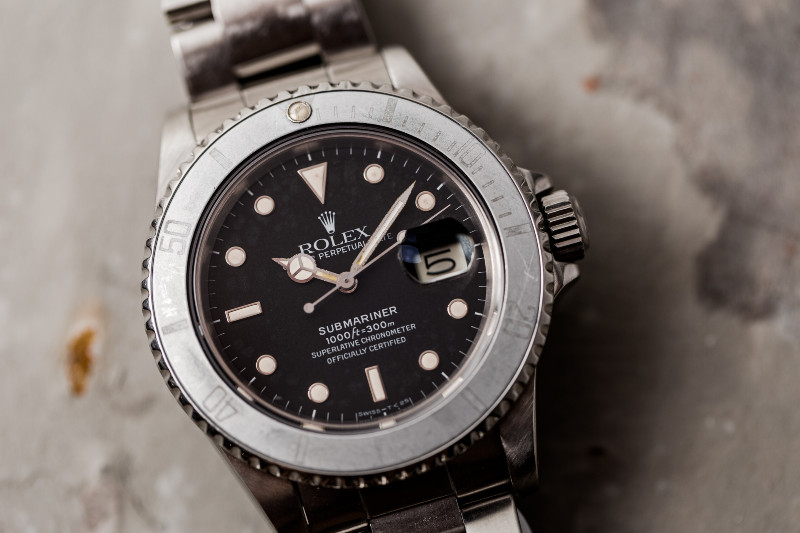 There are many different versions of the Submariner, whether you are looking for a vintage ‘Ghost’ faded bezel, maxi dial, Super Case, or even a colored Sub, there is something for every collector. Continue discovering by browsing the current WatchBox Rolex Submariner inventory.

> Rolex Deepsea: The Most Extreme Rolex Dive Watch Offered to the Public

The post Everything You Need to Know About the Rolex Submariner appeared first on WatchBox.

Everything You Need to Know About the Rolex Submariner