Review: The World of PostSecret by Frank Warren 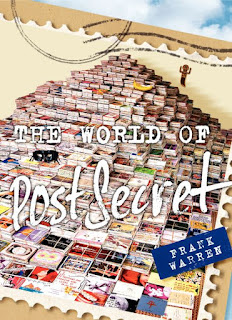 PostSecret began in 2004 when Frank Warren asked members of the public to anonymously contribute a Secret to a community art project. The secret could be a regret, fear, betrayal, desire or even confession of childhood humiliation and contributors were encouraged to reveal their secret on a decorated postcard and send it in. His goal at the time was to receive 365 postcards.

Much to Warren's surprise, the project took off and he has received well over a million secrets. Frank Warren has published six collections of secrets from the art project, with The World of PostSecret being his sixth, published in 2014.

The secrets cover the full gamut of topics and feelings. Some make you smile, like these two.

"I wear an AC/DC shirt under my clergy robes." Page 78

"Sometimes, if my dog refuses to eat, I pretend to cook his food on the stove. Works every time!" Page 84

Some secrets plucked on the heart strings:

The Trick to Always Looking Sexy for …
5 Simple Ways to Spy on Android Phone
Summerland: El cielo de las lesbianas…
Best Organic Coffees That Are Healthy…
Adam Lawson interview I The EIGHTH, u…

"My wealthy husband has been divorced 7 times because he found out they were only with him for his money. He married me because he thinks I'm different. I'm not." Page 48

Others blew my mind a little:

This secret stayed with me for days, and the author has heard from someone connected with large-scale tragedies, who claims that "in rare cases, people have been known to use a large disaster as an opportunity to start a new life and leave behind a looming divorce or escape imminent bankruptcy."

I find that astonishing to consider. I know some people voluntarily disappear to begin a new life, but presumably they plan to do so beforehand. A new identity requires money and a plan, so I can't imagine how a person could re-invent themselves after an unexpected event like 9/11. You couldn't pack a single thing and you'd never be able to travel again with facial recognition cameras everywhere for a start. Boggles the mind. Unless they chose a life of anonymity on the streets. I wish I knew more about this particular secret.

There were secrets that made me angry, like this one:

"My husband and I shower together almost every day... He has NO idea that I pee in there EVERY TIME! Hehe :-) " Page 257

Firstly, that's disgusting! Secondly, of course he knows. How could he not know?

The scope of the PostSecret project is enormous and this particular collection comprises a great variety of secrets, including secrets from the short-lived PostSecret App that was closed down in 2011 due to malicious and uncontrollable content.

I was surprised to find that Frank Warren is looking for a new partner for the project and potentially someone to take over PostSecret for good. I wonder what it takes to run a project like this. I know I don't have the stomach for it, that's for sure.

The World of PostSecret is a look into the hearts and minds of everyday people like you and me, and I found pondering its pages produced a mixed bag of emotions. I think I'll be glad to return it to the library and be thankful I don't have any secrets like that. Or do I?

Review: The World of PostSecret by Frank Warren