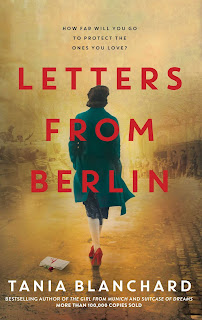 Today guest reviewer Neil Béchervaise shares his thoughts on Letters From Berlin by Australian author Tania Blanchard, an 'unforgettable tale of love, courage and betrayal inspired by a true story.'

As the Allied forces edge closer, the Third Reich tightens its grip on its people. For eighteen-year-old Susanna Göttmann, this means her adopted family including the man she loves, Leo, are at risk.

Desperate to protect her loved ones any way she can, Susie accepts the help of an influential Nazi officer. But it comes at a terrible cost – she must abandon any hope of a future with Leo and enter the frightening world of the Nazi elite.

Yet all is not lost as her newfound position offers more than she could have hoped for … With critical intelligence at her fingertips, Susie seizes a dangerous opportunity to help the Resistance.

The decisions she makes could change the course of the war, but what will they mean for her family and her future?

Facto-fictional, ‘based on fact’ and even historical, the family history of the Jewish/Australian migrant has become one of the more popular genres deriving from World War II. Letters From Berlin moves a step further to include both the self-seeking Nazi official, the resistance fighters and the impact of the Russian incursion from the east.

The resulting amalgam offered by Tania Blanchard provides a deeply satisfying and moving account of family life and relationships in Germany from comfortable pre-Nazi times into early Communism with a rather more tenuous bridge to Australian reflection on a time past but not forgotten.

Blanchard tracks the decline of a land-holding family from benevolent innocence through brutal terror to tormented realisation of the unrelenting brutality of both the Nazi and succeeding Communist regimes in East Germany. Adoption as a trail from loss and a path to survival feature heart-rendingly in some of the more powerful scenes while the sweetness and the bitterness of love blend with the impact of jealousy to link survivors towards an unexpected resolution.

Letters From Berlin invokes the power of the hand-written letter as a memory record and as an historical tracer to times irrecoverable. It evokes tears of anger and tears of distress so that, ultimately, it provides an opening into a world seldom mentioned, a world of the farming gentry of Germany during World War II and, on that most satisfying level, a good read.