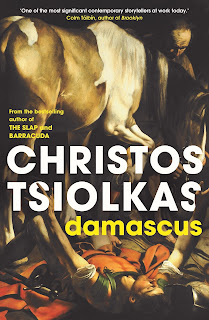 * Copy courtesy of Allen & Unwin *
I recently mentioned Australian author Christos Tsiolkas in my review of Northside, however despite how much respect I have for the author and how much I enjoy watching him speak in interviews, I've resigned myself to the fact that Damascus just isn't for me. Not to worry, guest reviewer Neil Béchervaise picked it up instead and offers the following review.

Christos Tsiolkas' stunning new novel Damascus is a work of soaring ambition and achievement, of immense power and epic scope, taking as its subject nothing less than events surrounding the birth and establishment of the Christian church. Based around the gospels and letters of St Paul, and focusing on characters one and two generations on from the death of Christ, as well as Paul (Saul) himself, Damascus nevertheless explores the themes that have always obsessed Tsiolkas as a writer: class, religion, masculinity, patriarchy, colonisation, exile; the ways in which nations, societies, communities, families and individuals are united and divided - it's all here, the contemporary and urgent questions, perennial concerns made vivid and visceral.

In Damascus, Tsiolkas has written a masterpiece of imagination and transformation: an historical novel of immense power and an unflinching dissection of doubt and faith, tyranny and revolution, and cruelty and sacrifice.

If, as the publishers assure us, Damascus is “a masterpiece of imagination and transformation” then we may be forgiven for wondering why so much is so predictable. Of course, we probably know the story of Saul/Paul and his transformational road to Damascus experience. We are familiar with the misogyny attributed to the region and the period. We may even be familiar with Saul/Paul’s writings about the acts of the early Christian apostles and his letters to the early Christian enclaves. We may be less familiar with the fact that he was born about 4 BCE, that he was a Greek speaker and his trade was tent-making.

Tsiolkas’ multi-voiced narrative offers a broad critique of Saul/Paul’s probable background, his formative experiences, his response to those with whom his beliefs conflicted and the reaction of those who were close to him, as friends, relatives and jailers.

Damascus is a tough read. The emotional challenges of the brutality and on-going misogyny grate against the apparently unquestioning and unquestionable acceptance of the need to turn the other cheek and to love thy neighbour. In a jealous, raging argument with Paul, Christ’s ‘twin’ brother, Thomas dismissively spits, “And it was on the road that he realised, Roman, Jewish, Samaritan, Arab, Greek, none of that mattered. It’s how you treat your neighbour, the stranger, the exile – only that matters”.

Paul’s self-seeking and jealous insistence on his personal rightness and righteousness provide a stark contrast with those who do not totally agree with him. His attitudes and his actions appear to be at odds with the Paul whom Tsiolkas appears to be championing. The increasingly biblical writing style towards the end of the novel appears to me to be at odds with the author’s stated intent, “I wanted to do the impossible: to be faithful to both Paul and Thomas”. Perhaps it is the extent to which Tsiolkas achieves his intent that ultimately determines the value of his ‘journey’.

Drinking Water in Damascus a Casualty of Syrian War

DJ CHRISTOS AND TEBOGO HEAD FOR A DIVORCE MZANSI-STYLE!