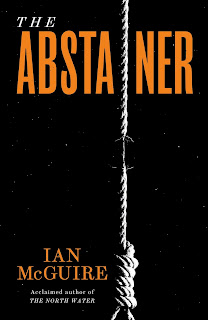 Guest reviewer Neil Béchervaise is back to share his thoughts on The Abstainer by Ian McGuire; an historical fiction novel set in 1860s Britain and America.

The rebels will be hanged at dawn, and their brotherhood is already plotting revenge.

Manchester, 1867: Stephen Doyle, an Irish-American veteran of the Civil War, arrives from New York with a thirst for blood. He has joined the Fenians, a secret society intent on ending British rule in Ireland by any means necessary. Head Constable James O'Connor has fled grief and drink in Dublin for a sober start in Manchester, and connections with his fellow Irishmen are proving to be particularly advantageous in spying on Fenian activity. When a long-lost nephew returns from America and arrives on O'Connor's doorstep looking for work, O'Connor cannot foresee the way his fragile new life will be imperilled - and how his and Doyle's fates will be intertwined.

In an epic tale of revenge and obsession, master storyteller Ian McGuire once again transports readers to a time when blood begot blood. Moving from the gritty streets of Manchester to the rolling hills of Pennsylvania, The Abstainer is a searing novel in which two men, motivated by family, honour and revenge, must fight for life and legacy.

From Theobald Wolfe Tone’s 1791 An Argument on Behalf of the Catholics of Ireland through the Irish Rebellion of 1798 to the potato famine which led to mass migration to America and Australia in the early 1800s, British government response led to increasing bitterness and organised reaction by the Catholic Irish in England. Against this background, McGuire’s latest novel, set in the late 1860s in Manchester offers an intriguing insight into the difficulties faced by Irish immigrants into England.

That the brutal meting out of punishment on the presumption of guilt should have generated long-standing hatred for the British and their justice system is unsurprising. It is a hatred that still underpins fears of anti-British terrorist threats, of IRA bombings and radical political extremist groups.

The return of an Irish extremist, Stephen Doyle, from America to organise revenge for the hanging of Fenian colleagues forms the basis for The Abstainer but it is the role of the Irish police officer, James O’Connor in the Manchester constabulary that provides a counter-balance of interests which ignite the plot.

Woodland Gardens Caravan & Camping
Best Vegan Coffee Creamers That Taste…
Tips For Decorating With Large Rugs
8 Places to Drink Coffee in KC that …
4 ways to legally protect your new bu…
Antagonism against O’Connor because he is Irish makes it difficult for him to enlist the informers he needs to expose the Fenian revenge conspirators. The closeness of the Fenians, equally, make infiltration almost impossible. Infiltration, nevertheless, is achieved and, predictably, it leads to the death of the spy.

So far so good, we may say. At this point, however, things begin to change. An even more prejudiced London policeman is brought in to oversee investigation of the attempted murder of the Manchester mayor. O’Connor is jailed on trumped up charges because he is Irish and witness to an incident in which Doyle shoots O’Connor’s off-sider but allows him to live.

In short order, Doyle flees back to America and O’Connor follows him. This shift allows McGuire to expand Doyle’s back-story, offer a brief account of on-going classist brutality, anti-black racism and coal-mining in Pennsylvania. Saving a brutalised young boy from further beatings at the mine, O’Connor travels to the farm he was brought up on, kills his step-father and, in turn, is killed by Doyle. Got it? I had some trouble here too.
The story ends with the boy, having travelled to San Francisco (an amazing feat on tattered feet) is educated and converted to Christianity. Proselytising on a street corner to an uncaring crowd of passers-by, the boy fills in the gaps in the latter section of the novel by telling how he was saved by O’Connor, before moving off into a slum alley to live out his degraded life in denial. But maybe that is what, after all, it was all about.