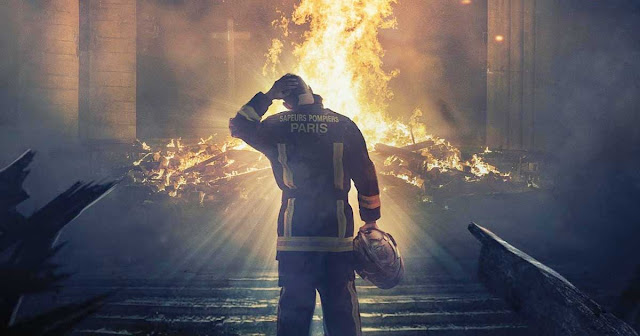 Victor Hugo’s 1831 novel ‘The Hunchback of Notre-Dame’ made Notre-Dame de Paris, a medieval Catholic Cathedral situated in Paris, a national icon and served as a catalyst for renewed interest in the restoration of Gothic architecture, which was being neglected and often being destroyed to be replaced by new buildings at the time. Almost two hundred years after Victor Hugo wrote his masterpiece, the 850 year old Notre Dame Catheredal on which Hugo's story is centred suffered a colossal damage owing to a massive fire that broke out on 15 April 2019, causing its spire and roof to collapse in smoke and flames. Noted French filmmaker Jean-Jacques Annaud’s latest film ‘Notre-Dame on Fire’ recreates the events that took place on April 15, 2019, when the cathedral suffered the biggest blaze in its history. The film intends to transport the viewer right to the centre of the Notre-Dame de Paris fire of April 2019, retracing how the brave firefighters put their lives on the line to accomplish a nigh impossible rescue.

16 of the Most Famous Architects Who …
The Relationship Between NFTs And Cel…
Official: Manchester United complete …
A Guide To Visiting Antigua, Guatemal…
Notre Dame Catheredal, dedicated to the Virgin Mary, is considered one of the finest examples of French Gothic architecture. It stands out for its pioneering use of the rib vault and flying buttress, its enormous and colourful rose windows, its musical components, notably its three pipe organs and its immense church bells. The catheredal is a World Heritage site and French President Macron has promised to rebuild it. While Macron has been hoping that the cathedral could be restored in time for the 2024 Paris Summer Olympics, the architects expect the work could take from twenty to forty years. Through his film, Jean-Jacques Annaud endeavors to achieve a dual objective: documentary accuracy and cinematic grandeur. And that’s precisely what makes the project so ambitious. A documentary on a subject like this would have been ideal but with a visual master like Jean-Jacques Annaud at work, one should always be prepared to be surprised.
‘Notre-Dame on Fire’ combines archive footage taken from the night of the incident with shots captured using huge sets rebuilt in replica. The narrative follows exact sequence of events as they unfolded that fateful night ending at sunrise on April 16. The film presents the challenge faced by the emergency services faced due to a delay in sounding the alert, as well as the struggle to get personnel and equipment through Paris rush-hour traffic and the resulting chaos. Right at the centre of the film of course is the firefighters’ perilous combat against a seemingly uncontrollable fire.
Since the actual Notre-Dame cathedral has been under reconstruction ever since, none of the film’s sequences could be shot there. So, Jean-Jacques Annaud had to rely on other cathedrals to fill in the main role. First, the Bourges Cathedral was used for many scenes outside the cathedral. Then, the Notre-Dame d'Amiens Cathedral, whose spire and certain parts of the building are similar to those of Notre-Dame de Paris. Finally, the Saint-Étienne cathedral in Sens, where the forecourt, the tower stairs and the nave was used, as well as the scenes where the 13th century wooden framework is catching fire.
A year before the release, the veteran French filmmaker whose credits include films such as The Name of the Rose, Enemy at the Gates, Seven Years in Tibet, Two Brothers, and Wolf Totem, among others, publicly announced that he needed footage for the traffic jams the fire caused, for the spontaneous praying scenes, and for some international TV reports. He even set up a website so that everyone could send their own videos.
‘Notre-Dame on Fire’ could have been another of those uninspired disaster films that one generally associates with Hollywood but it is actually saved by Jean-Jacques Annaud’s visionary direction, his ingenious use of archive footage from the actual event, smartphone videos, TV footage, etc. Also, the original score composed by Simon Franglen (The Magnificent Seven, Pandora: The World of Avatar, The Truth About the Harry Quebert Affair, Peppermint, and The Curse of Turandot, among others) brings the events to life. And while it may not be among Annaud’s best works, it nonetheless proves to be an engaging cinematic experience.
The distribution arm of PVR Limited, PVR Pictures, has entered into an institutional partnership with the Embassy of France for promoting the cultural diversity of France in India by showcasing French movies to the Indian audiences. In a first among a multi-city event, ‘Notre-Dame on Fire’ was screened at PVR Director’s Cut, Vasant Kunj as part of a special invitation extended by the Ambassador of France to India, Emmanuel Lenain, who was also present on the occasion along with Sanjeev Kumar Bijli, Joint Managing Director, PVR Ltd.
‘Notre-Dame on Fire’ is slated to release all over India in selected theatres on Friday, June 24 in its original French version with English subtitles.

This post first appeared on A Potpourri Of Vestiges - Movies, Reviews, News,, please read the originial post: here
People also like
16 of the Most Famous Architects Who Ever Lived
The Relationship Between NFTs And Celebrities
Official: Manchester United complete first summer signing
A Guide To Visiting Antigua, Guatemala: The Best 5 Things To Do And See