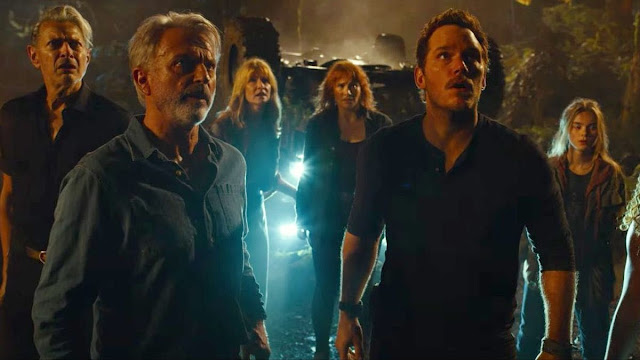 It was almost three decades back that I went to see Steven Spielberg’s Jurassic Park (1993) along with my uncle and his gang of friends at New Delhi’s ‘Savitri’ cinema hall (the cinema complex is now home to a multiplex) as a 5 year old and that’s how my tryst with cinema began. Over the years, there have been many sequels / reboots but the thriller and excitement of the original has eluded them all. Seven years ago, Colin Trevorrow unleashed Jurassic World (2015), set twenty-two years after the disturbing turn of events at Isla Nublar—an island off the coast of Costa Rica—which had forced John Hammond (superbly played by the great English thespian and filmmaker Richard Attenborough), the founder and CEO of bioengineering company InGen, to abandon the theme park he had populated with ingeniously cloned dinosaurs.

Basically, it's been ten years since Hammond's vision of a dinosaur theme park finally became a reality. The new park is named as Jurassic World and is owned by the Indian business magnate and dinosaur enthusiast Simon Masrani (brilliantly essayed by late Irrfan Khan) who has not only nurtured Hammond's dream but has also taken it to a whole new level as it’s now possible to genetically splice the dinosaur DNA at will with that of various other species, giving rise to a hybrid breed of dinosaurs. The film delivered some genuine excitement, taking us on an adventurous journey to long-forgotten Spielbergian avenues of madness and confusion, and even explored the possibility of a constructive interaction between the humans and the dinosaurs, evident from the scenes wherein Chris Pratt's character Owen Grady tries to train the Velociraptors.

The last offering Jurassic World: Fallen Kingdom (2018), directed by J.A. Bayona, had tried to blend the thrills of Jurassic Park with the epic-like quality of King Kong. And, despite its shortcomings, it kept one on the edge of the seat for the most part. The film ends with the idea that humans must learn to coexist with dinosaurs out there in the wild. And now after a four year hiatus, we have Jurassic World Dominion (2022), which marks Colin Trevorrow’s return as the director. Four years after the destruction of Isla Nublar, dinosaurs now live and hunt alongside humans all over the world. Owen Grady now lives an aloof life with his wife, Claire (Bryce Dallas Howard), and their adopted daughter, Maisie (Isabella Sermon), who is a clone of Hammond's former partner Sir Benjamin Lockwood’s daughter.

If the idea of living with dinosaurs wasn’t dangerous enough, there is also this clichéd corporate megalomaniac whose film BioSyn is secretly developing some dino-clone technology (Maisie is the key to it) to create dinosaurs as weapons as well as some kind of a super-locust to destroy crops planted by farmers who refuse to buy the BioSyn seeds. Yes, you read it right. It is no longer only about the dinos and adventure parks. We have now officially entered the James Bond and Mission: Impossible territory. Speaking of which, one is reminded by the thrilling bike chase sequence wherein Owen Grady is chased by dinos. It’s easily the movie’s highlight.

The idea of dino adventure has clearly been done to death and there is hardly any novelty factor. Even the nostalgia factor is missing now and so you desperately bring back the Sam Neill’s Alan Grant, Laura Dern’s Ellie Sattler, and Jeff Goldblum’s Ian Malcolm. But, sadly, it’s just not enough. There’s something seriously wrong. It’s the kind of ride that one prays that it gets over soon so that one can go back home (and I don’t mean it in a good way, for the film which is sans any sense of thrill or adventure for the most part). Colin Trevorrow’s poor directing has to be blamed for it (mind it, writing and acting aren’t great either).

When you see it done so wrong, you begin to appreciate what Spielberg achieved with the original film even more. The film introduces the viewers to the apex predator Gigantosaurus. Alan Grant describes it as the “biggest carnivore world has ever seen”. Only it doesn't look that big. It doesn’t even look half as scary as the T. Rex from Jurassic Park (1993). Even today you can look at the scene wherein the T. Rex escapes the paddock and it will give you the chills. Unfortunately, Jurassic World Dominion has nothing that even comes close to it, least of all the so called apex predator Gigantosaurus. With Jurassic World Dominion, the Jurassic Park franchise hits a new low. The franchise has now reached a point where the creators need some serious rethinking, if they want to keep it alive. Maybe they should follow the Star Wars route and try and come up with something akin to ‘The Mandalorian’ in the long form space.