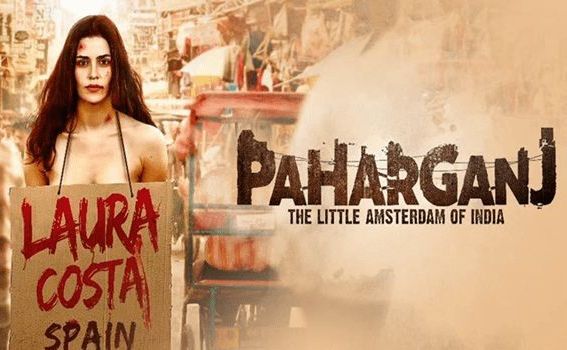 Paharganj, situated just west of the New Delhi Railway Station, is a major transit point for all tourists who come to India. The place hustling and bustling with tourist activity around the clock is famous for its affordable hotels, eateries, lodges and whatnot. For writer-director Rakesh Kumar Ranjan who has been coming to Paharganj ever since his college days, the place holds a great enigma. During a freewheeling conversation he recently told me how the place completely transforms during the night time. How neon sign boards written in Hebrew suddenly appear as the places change their identity in the middle of the night, only to return to their former state by the break of dawn.
Kumar was clearly drawn by this mystery when he embarked upon a journey to make a Film on Paharganj back in 2015. After extensively researching for a year it took him another year to complete the script and finally the film got ready by 2018. But as soon as the film’s trailer got released online it created a sense of hostility among the hoteliers and traders of Paharganj who feared that the film might have a negative effect on their livelihood. So the locals approached the Delhi High Court which in turn put the ball in Union government’s court. The film was ultimately given the go ahead as CBFC had certified it already. One really wonders how many times the filmmakers will have to go through the same ritual over and over again.
On the directing front, Rakesh Ranjan Kumar succeeds in evoking a strong sense of claustrophobia that defines the locales of Paharganj but on the writing front Kumar and team falter in putting together a coherent narrative. Also, the stylistically shot film leaves a lot to be desired on the editing front. Here one must mention about the film’s beautifully shot song sequences. Spanish author and actress Lorena Franco who plays the film’s lead impresses with a good screen presence. But the other performances around her are quite average. The film could have greatly benefited from a stronger supporting cast.
Paharganj succeeds in creating a world of mistrust and betrayal where no one is safe. Lost in its treacherous alleys the hunter can easily become the hunted and the predator can end up as a prey. The film’s Delhi-based producer Prakash Bhagat deserves a special mention for backing an unconventional and challenging project like Paharganj. One hopes that it will encourage more such Delhi-based projects and may even pave way for Delhi’s ascension into a major filmmaking hub in the times to come.
Rating: 5/10
A version of this review was first published in The Sunday Guardian.
Readers, please feel free to share your opinion by leaving your comments. As always your valuable thoughts are highly appreciated!