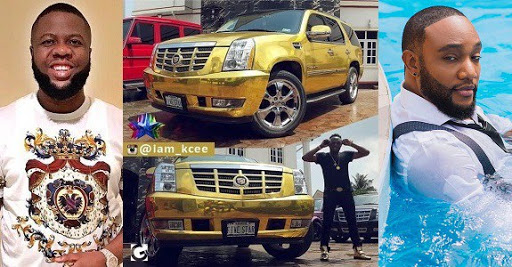 Nigerian big boy and socialite, Hushpuppi , has made a fresh claim that Nigerian singer, KCee, bought his car on a loan.
The socialite made this claim on a live interview on Instagram with social media star, Oyemykke – the Gucci crooner had at first spoken about celebrities dissing him on social media before he went on to reveal the bombshell on Kcee.
Hushpuppi stated that some Nigerian celebrities who shade him on social media, don’t even have money as they claim to have and said he knows of one who bought his car on a loan.

Then Oyemykke persuaded him to mention names, to which Hushpuppi replied;
Kcee, i have proofs that he bought his car on loan, i will post it on social media.