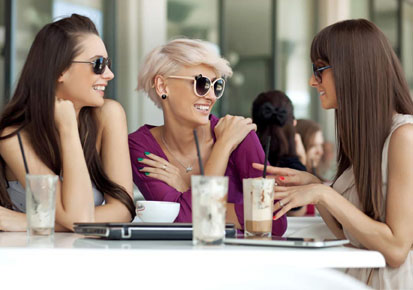 There are some things that women always like to keep it to themselves. Like men, women too have secrets. When asked something personal, a woman might end up lying. There are some topics rather things on which women always lie. These are simple things that every woman lies about. Be it her age, figure details, weight or ideologies. Almost every woman hides about her age. If you ask the age of a woman, she will either get angry or lie to you.

Similarly, there are other things that women always lie about. For example, a woman will always lie about her breasts size. Even if she is wearing a 32 C, she will always tell that she is wearing 36 A. these lies are one of the ways to boost themselves and also to appear perfect in front of others.Although a woman will lie about such things, she will never accept. For example, if you say that a woman is die hard romantic and cries over romantic movies, she will deny it. Women do not like being called typical and to
get rid of the prejudice, a lot of women lie on such things. While honesty is the key to a happy relationship, few things should be left and buried. Asking on such things can hurt the feelings of a woman.Here are some common things that women lie about.


Common things that women lie about are:

1.Age: It is one of the most famous lies that women tell both men and women. Hiding age makes women feel younger and also reduces peer pressure.

2.Weight: It is another thing women lie about. A woman always wants to appear thin and perfect, so there is no doubt that she will lie about her weight.

3.Cup Size: She might be having small boobies but to impress a man, a woman lie about it. Often women do it to avoid being talked about.

4.Being Romantic: A woman is always said romantic. However, it is one of the things that women lie about to men. She might be a die hard romantic lady, but she will lie saying she is practical.

5.Ex Boyfriends: Almost all women lie about their list of ex boyfriends. It is one of the lies women tell mostly to men so as to ensure a good present and future.

6.Height: Few women also lie about their height. It is said to either appear shorter or taller at the moment, and get the advantage of the situation.

7.Sex Status: It is one of the secrets that women want to keep it to themselves. They do not like to share about their sex status and the number of guys she has slept with.

8.Gossiping: It is a second nature of woman. So, lying or stating that you do not gossip will make no sense. At some point or the other, you do gossip as it is the nature.