US Job Losses By Bankruptcies Soared To the Highest Since 2005

Job Cuts Sparked By Bankruptcies Hit Highest Level Since 2005
Sixty-two thousand one hundred thirty-six job Losses were a result of firms going bankrupt and laying off employees in 2019. The amount is higher than the annual totals for bankruptcy-related job losses dating back to 2005, when 74,200 were seen. 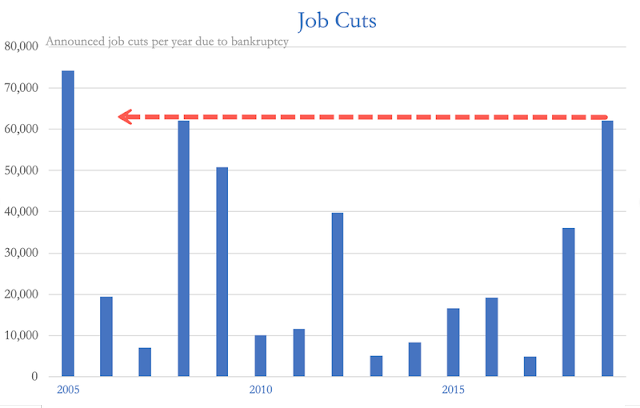 The report said one of the leading causes of job losses last year were "trade concerns, emerging technologies, and shifts in consumer behavior."
As a whole, firms slashed 592,556 jobs in 2019, or about 10% higher than 538,695 cuts announced in 2018. It's the highest annual total since the global slowdown in 2015, when 598,510 cuts were announced.
Shown below, 2019 was the fourth-highest year for job cut announcements since the financial crisis. 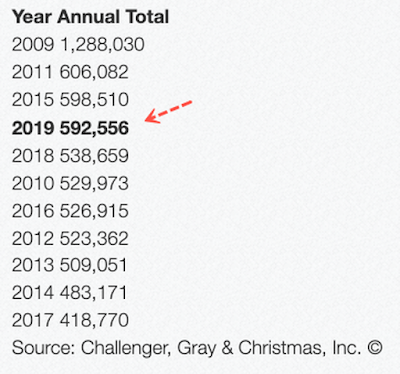 The 62,136 announced cuts tied to bankruptcies equated to about 10.5% of all losses. This was the highest total since 2005, one of the drivers behind the cuts has been the implosion of retailers.
With employment and the US economy continuing to decelerate into 2020, it's likely that more Job Losses Tied to bankruptcies will be seen, and overall job cuts could keep moving higher.
All this means is that the employment slowdown we pointed out several months ago will persist well into the new year.

Quick Tips To Talk Yourself Down From…
You Say Covid-19, I Say Hangar 18!
Everybody wants me, so when do I self…
Introducing Superior Painters® Sub-Di…
Signs That You’re In A Healthy Love R…
The views and opinions expressed herein are the author's own, and do not necessarily reflect those of EconMatters.

US Job Losses By Bankruptcies Soared To the Highest Since 2005