Want to See What's Next for the Economy?

Want to See What's Next for the Economy? Try This.

Don't listen to the naysayers -- there IS a way to forecast the general health of the economy. This method has repeatedly proven itself.

Yes, you can anticipate the likelihood of a recession, even a depression -- or, conversely, when major economic measures -- like jobs -- will be robust.

That surefire way is the performance of the stock market.

Think about it: When people are optimistic about the future, many of them buy stocks and can do so almost immediately. But that same optimism takes time to play out in the economy. It might take months to draw up plans to expand a business, hire new employees and so forth. So that's why the economy lags the stock market.

The evidence is supplied by a chart and commentary from Robert Prechter's 2017 book, The Socionomic Theory of Finance: 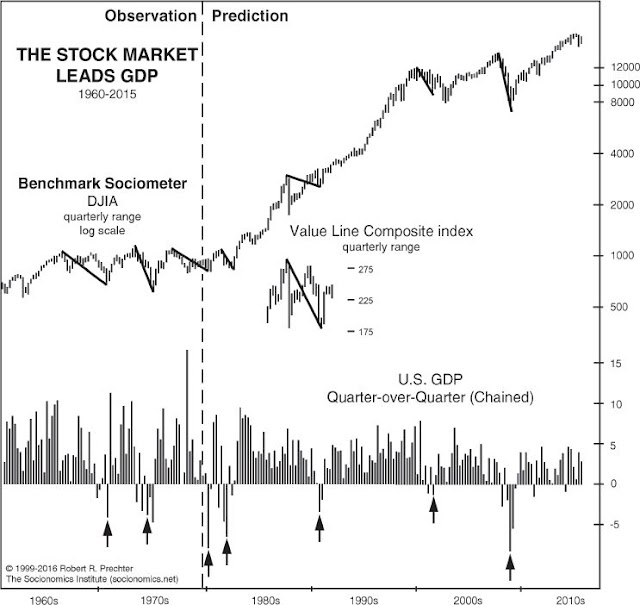 U.S. employers sharply stepped up their hiring in June, adding a robust 224,000 jobs
Given that the stock market's latest push higher has been in place since the December low, this positive jobs report was not a surprise.

Which is to say, if the stock market turns lower, don't anticipate any major consistently negative economic news to follow only weeks later. As Elliott Wave International President Robert Prechter once put it, "The stock market doesn't top on bad news, it tops when the news is good."

So, it's a myth that the stock market follows the economy. The evidence shows that it's the other way around.

Prepare For Victory
Math Full Complete Tricky PDF For Com…
CBD 2020: What to Expect + Our Top Pr…
Act! Growth Suite Gets a Refresh Head…
From Newbie to Digital Marketing Expe…

Want to See What's Next for the Economy?