Amid soaring credit card use, the tumble in Americans' savings rate continued in December with a modestly better than expected 0.4% MoM rise in incomes and as expected 0.4% rise in spending (but upward revisions in spending). 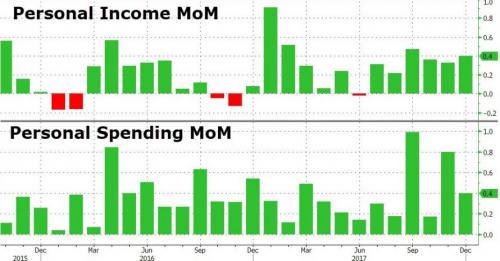 For the inflation waters, the Fed's favorite price indicator, the Core PCE, saw a one-tenth gain to 0.2%, matching consensus, and was up 1.5% Y/Y.

Income is growing at 4.1% YoY - the most since Nov 2015 - but spending continues to outpace that growth.

Income growth is dominated by private worker gains, which are rising at an impressive clip, up 5.2% YoY, the highest since Nov 2015. Meanwhile, government workers arent' doing too bad either, with average wages and salaries rising 3.1% Y/Y. 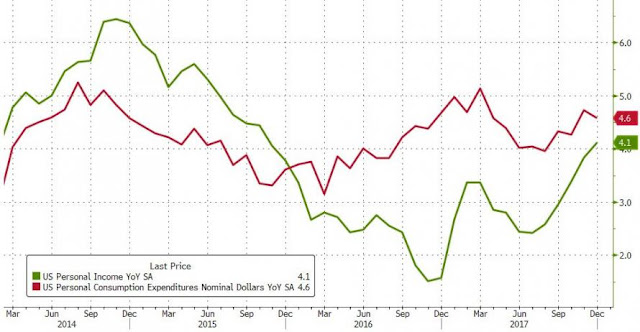 What is odd is that despite the rise in incomes, Americans continue to spend more than they make, which means that the US savings rate continues to slid, and is now not only the lowest since the crisis, but is the lowest since September 2005. 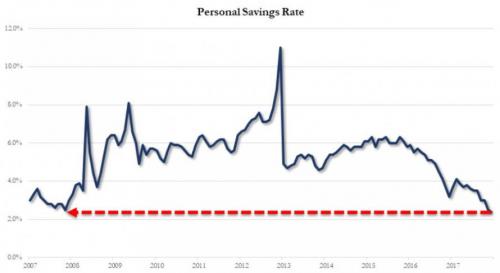 Recall the striking Gluskin Sheff chart we presented a month ago, which showed that 13-week annualized credit card balances in the U.S. had gone "completely vertical" in the last few months of 2017. We now know why: American consumer are officially tapped out. 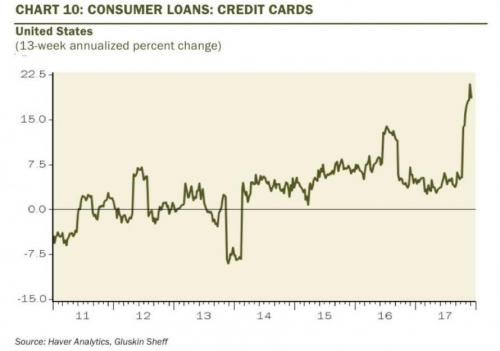 And remember David Rosenberg's "haunting math" from the GDP number:

As of today, that number would be even worse.