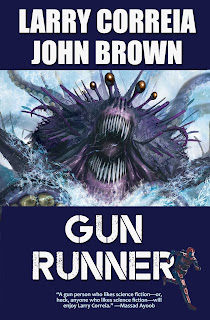 This is a classic space opera.   Jackson Rook grew up as a child warrior.   He had the mental abilities to be able to mind control a mechanized warbot.   His PTSD was not all psych, a large part of it was due to invasive malware attacking his implanted hardware.  Saved by the Captain of the galactic freighter the Tar Heel, Jackson was comfortably ensconced as a crew member.  The Tar Heel and its crew were forced to realize that they violated their ethical code by supplying weapons to the Warlord of Swindle.  Their ensuing actions are the fuel for the plot of the book.

Mech Warrior was a Microsoft computer game that I played years and years ago.   There was a rush of adrenalin suiting up in your Mech and sometimes stomping on enemies.  The authors capitalize on that feeling.  The ability to shed your feeble organic body and morph into a mechanical force of nature would be intoxicating and addictive.   Jackson had some issues which precluded him from diving back into his mechanical paradise.

Sara y Ava: la pareja lésbica de Lege…
Spider-Man: If This Be My Destiny - L…
5 Practical Tips on How to Use Social…
Remote Learning Resources for the Fir…
How To Make Sex Better In Long-Term R…

Swindle is an inhospitable planet that has a valuable resource and whose original colonists discovered the true meaning of the name of the planet.

Jane, a mysterious IT guru, provides a wonderful menagerie of bots.

I enjoyed this Book, the mechs, the bots and the creatures.

This book may have been received free of charge from a publisher or a publicist. That will NEVER have a bearing on my recommendations. As an Amazon Associate I earn from qualifying purchases if you click on a purchasing link below.#CommissionsEarned