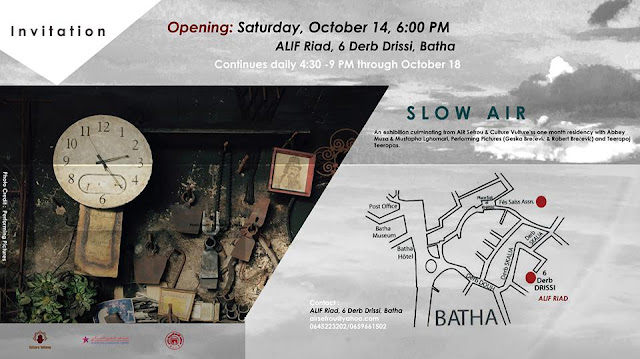 The unique environment in the medina of Sefrou has gathered this international group from USA, Sweden, Croatia and Thailand to explore new works together and independently. A meticulous observation of the intersection of light, craft and space emerges from all four artists in a diverse arrangement of form and material.
-
Their examinations of the real and the imagined will be extended to the public at the ALF Riad from October 14th to October 18th.

"It is a sweet, soft, enigmatic power that drives us on. We cease to
think, to feel, to will; we let ourselves be carried away by it, and
ask not whither?”  - Leopold von Sacher-Masoch, Venus in Furs 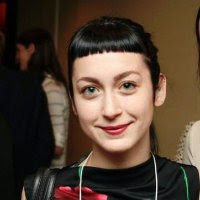 Abbey Muza’s practice of carpet composition stems from her deep research into the tradition of Amazigh weaving. She was drawn to the specificity of this style: the intuitive process using non-traditional materials with symbolic devices that are carried by the weaver to the present day.

Her month in Sefrou has fluctuated between two trajectories. One being the assemblage of a carpet on a loom she built in her bedroom, interlaced with plastics and inclusion of found text. The sensorial and sensual nature of this strenuous act accommodates well to her private quarters-the voluminous walls supporting the visceral process of this ancient form of technology.

The other aspect of her work is with the artist/weaver Mustapha Lghomari in the medina of Sefrou. Passing on knowledge to Abbey from his father and grandfather, Mustapha revealed techniques on how to spin, thread and warp with great speed on the hand-built loom whilst introducing an online archive with an abundance of motifs to apply to their collaboration. Here, Abbey has initiated five meters of brocade work. She has brought this skill into the studio, modifying Mustapha’s loom for a rhythmical exchange.

Mustapha Lghomari is both an artist and an artisan. His father, grandfather, and great-grandfather worked as weavers and he has chosen to continue their craft. However, Mustapha is no ordinary weaver. Making textiles is a passion that consumes him-as he says, it is his life. He passes each day weaving in his studio. At night, he logs into his computer and spends hours making drafts on special weaving software while downloading patterns and images of textiles to his archive. Over the past three years, he has accumulated thousands of such files. Weave Draft Archive displays an extraordinary amount of research into his craft, and is shown here at the ALIF Riad as it was initially shared with Abbey Muza. Abbey has collaged patterns existing in this archive to create the motifs for their collaborative brocade weaving. 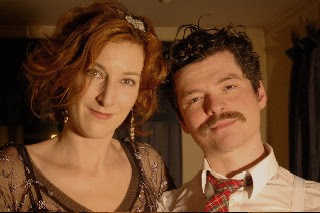 Geska Brečević and Robert Brečević are two artists who make the collaborative duo Performing Pictures. Their arrival to Morocco was intended to rouse their deep roots planted in Sweden, Croatia and Mexico.

With work produced extensively in environments abundant with artisans, the philosophy of AiR Sefrou resonated and aligned with their community-orientated endeavours yet with an air of the unknown-this being Robert’s first visit to Northern Africa.

In Sefrou, they have discovered a location devoid of ivory towers and pop culture with people connecting to craft opposed to the conceptual or abstract. Questions of value and purpose in traditional craft and the arts, while straying far from the ‘exoticised experience’, have been prevalent for them. Amidst the necessity of this critical perspective, Performing Pictures moved away from any decorative application in their new work and chose to work with two crude metal boxes: a diptych in perpetual motion.

Revisiting the classical technique of the flip book and the hand cranking animation box, the essence of metallic material is presented within. The detailed photographic observations of texture on metal doors are embedded into the animation while projecting the experience of the tactile; the textured. The movement of these boxes travels from left to right and right to left, implying the Latin and Arabic mode to read. The ebb and flow of the two scripts from this mechanical entity are a gesture of coexistence yet, perpetuating tension as the two shall never meet.

The bare bones of the frames were constructed with Younes Bouhaddoun, a metal worker on the outskirt of the medina. The boxes act as a counterpart to the immaculate white paper applied within. The interior also evokes images of fantastical creatures representing the boundless imagination of the child. The transformation of ‘the kid’ from human to animal is wistfully contained in a box within a box. This remarks again on a relentless motion that never reaches its final objective and the strategy at hand to choose a ‘fascinated indifference’ towards the fundamental oxymoron of life. 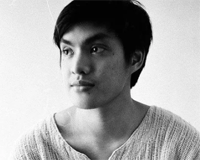 Years ago, Teerapoj Teeropas’s mentors in Thailand saw in his designs a similarity to the colours and shapes appearing in traditional Moroccan crafts. These impressions held a role in instigating his recent journey to Northern Africa.

Integrating quietly into the familiarity of the medina (these streets reminding him of home in Bangkok), the patterns of shadows, the light and the darkness triggered his eyes to the detailed stucco carvings. These dynamic carvings done from the artisan’s innate muscle memory drew Teerapoj to Fes, where he has been working with two skilled brothers, Abid and Hafid.

The scale of this new work is intentionally small and subtle, imprinting generations of wisdom and bridging thousands of miles of cultural divide. 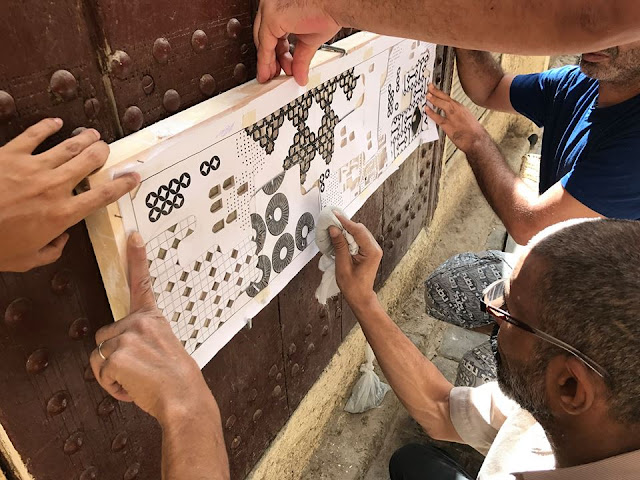 Mindfulness to the physical absence of history and the decaying architectural details in the medina are at the core of this piece. His research, unrestricted and fluid, was noted in derelict riads and pathway formations in the old town. Collected designs of the lost and forgotten were chiseled into the plaster structure directly on the street amongst wide-eyed children and the passerby thus being guided by the immediate environment and all its past resonances.

The exhibition will be open from 6pm to 8pm October 14th until October 18th at the ALIF Riad, 6 Derb Drissi, Batha, Fes. Please join the artists on October 14th Saturday between 6pm and 8pm for drinks and conversations.