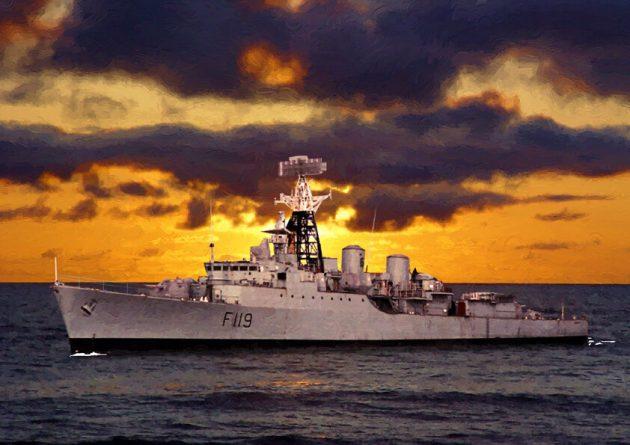 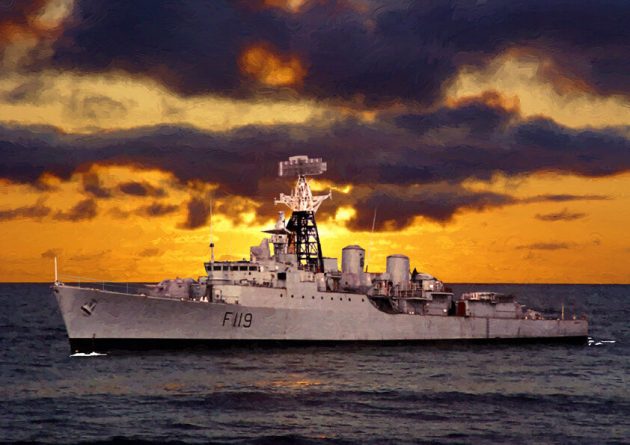 When dad took a second slice of cake or spent more time in the garden in the hot sun than mum thought wise, he would say: Don’t worry, Lily, you’re a long time dead.

My dad was always cheerful and curious, always interested in what I was doing. He was proud when I became a newspaper reporter and found it amusing to see my by-line in the local paper.

He never talked about the war until he was over eighty and only did so when I pressed him. He seemed to see it as a spectacular folly, a sort of madness. He shook his head as he thought back and, as he spoke, I understood for the first time why his familiar saying – You’re a long time dead was so appropriate.

Dad grew up in Edmonton, North London. He got a scholarship to the grammar school, Latymer, not far from where he lived. It was the dream of his father, a tram driver, that his son got a job where he used his brain not his hands to earn a living.

War was declared on 3 September 1939. Dad’s four elder brothers joined up, three in the army, one in the RAF; he died in a plane shot down by friendly fire over Japan in 1944. 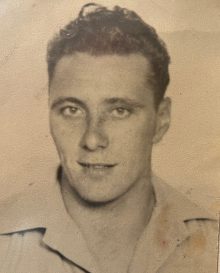 Dad was seventeen and didn’t want to be left behind in what was going to be a quick war over by Christmas. He altered the date on his birth certificate from 17 May 1922 to 1921. With no knowledge of life at sea, he exchanged his school uniform for the Royal Navy uniform and set off ‘to see the world.’ He was fit, young, with a good eye and steady hand.

The Chief Petty Officer introduced dad to what he described as ‘his new girlfriend’ – one of eight 4.7-inch calibre Mark XII cannon that fired a hefty 50lb shell with a maximum range of a little under ten miles. The destroyer was also equipped with a set of four torpedo tubes, depth charges, a quadruple pom pom and a pair of machine guns amidships. 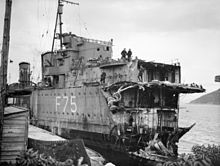 Gunner Thurlow was behind his Mark XII on 12 April 1940, a month before his 18th birthday, a cold windy day at the height of the Second Battle of Narvik. His best mate, Tommy Billings, a boy a year older than him from East London, was below decks when a torpedo fired from the German destroyer Z2 Georg Thiele exploded and the bows disintegrated in the blast. Tommy Billings was gone, a long time dead, his body never found. The Eskimo limped back to Falmouth to undergo repairs and was fit to return to service in six weeks, a miracle, they said, of British craft and workmanship.

Between 1940 and 1942, the British colony of Malta faced relentless aerial attacks from German and Italian bombers. Strategically set in the central Mediterranean, the island was an essential base to disrupt Italian supply lines to Libya and reinforce the British army in Egypt.

By July, Malta had only enough food, equipment and aviation fuel to last a month. To secure the island, the Royal Navy amassed a fleet of seventy-two ships, one of the biggest convoys in history. They disembarked from numerous ports under clear night skies on the 3 August for the 3,000 mile voyage across the Bay of Biscay to Gibraltar.

It took five days to reach Gibraltar where the fleet refuelled. The sailors slept fully dressed, except for their boots, and wore half-inflated lifebelts. German planes shadowed the convoy without going into action. 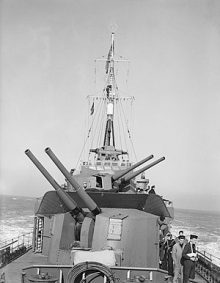 Canon on board the Eskimo

On 10 August, dad saw the Mediterranean for the first time. The sea was warm and calm, perfect for swimming, not that there was much chance for that with German U-boats and Italian subs like sharks prowling undersea.

Dad was behind his gun and watched from the distance as the aircraft carrier Eagle was hit by a torpedo and sank in a matter of minutes, taking a quarter of the fleet’s air power – and the first of the fifty-eight Royal Navy ships in the flotilla.

When the convoy was 600 miles from Malta, it came within range of the Luftwaffe stationed in Sicily. The air attacks came the following day, wave after wave of Heinkels and Messerschmitts.

Dad donned his tin helmet, balaclava and anti-flash gloves. He manned his gun on four-hour shifts, his eyes stinging from the smoke and cordite swirling over the sky. It wasn’t easy to distinguish between the German aircraft and the Spitfires when they took to the air, dogfighting briefly with the enemy fighters before setting a course for Malta.

One of the fourteen merchant ships went down. The destroyer Foresight was so badly damaged it had to be sunk. German Stukas dived low over the aircraft carrier Indomitable and stitched a sequence of shells along the decks. The sky filled with fumes and there was an eerie silence as the enemy planes departed – about ten percent of their number ditched in the sea.

While the wounded ships retired back to Gibraltar, the convoy pressed on. It was unable to set a direct course to Malta and followed a zigzagging route to avoid submarines. Everyone on board HMS Eskimo had survived on a couple of hours sleep a day for several days and dad recalled feeling more dead than alive as he manned his post.

As Malta drew nearer, Rear Admiral Harold Burrough on board the Nigeria led the column through the narrow straits to the south, then around Cape Bon, keeping close to the North African coast.

At dusk, the Nigeria was hit, followed almost immediately by the Cairo and, a few minutes later, a third torpedo struck the Ohio, a merchant tanker filled with aviation fuel, essential if Malta were to be saved. The attack on the fleet was by a solitary Italian submarine, her salvo of six torpedoes either the most skilful or luckiest of the whole war.

The Cairo sunk. The Nigeria set a course to Gibraltar. The Ohio stayed afloat and proceeded at slow speed.

After a few moments, dad heard the approach of enemy dive bombers. The fleet was lit by the cold light of the moon, each ship silhouetted against the evening sky. Empire Hope was hit fore and aft and sank in seconds. So many shells landed along the length of the Clan Ferguson, it was blown to smithereens. There were no survivors. Hits were registered on the Brisbane Star and Santa Eliza. Both carried on at reduced speed.

With bombers above and submarines below, the attack continued hour after hour. As the crew on board the Eskimo grieved for the ships and men lost in the fight, they were heartened every time an enemy plane was hit and spiralled on fire like a dying rocket into the sea.

Dad burned his hands through the flash gloves firing his Mark XII as fast as the loader could feed the gun. Sailors carried the ammunition up in boxes that were stacked behind the gunner. The ship swayed. The pace was fast. Smoke rolled in billows, blocking the moonlight.

A primed 50lb shell broke free from its housing and dropped the six feet down to the deck. Dad at the last second caught the shell in his palms. The weight broke both his wrists, not that he was aware of it that warm night in August 1940.

The Rochester Castle was damaged by a U-boat. The Glenorchy sank. The Wairangi and the Almeria Lykes were abandoned. By dawn only six of the fourteen merchant ships that had set out around the Bay of Biscay to Gibraltar remained afloat.

The Eskimo was ordered back to pick up survivors. Dad helped in spite of the pain in his wrists to feed the scrambling nets over the side. They dragged some 200 wet sailors on board. The Eskimo and Somali, also loaded with survivors, proceeded as the sun rose back to Gibraltar.

Restocked with fresh supplies and ammo, the Eskimo in less than 24-hours turned about to escort the battlecruiser Furious back to Malta with a fresh squadron of Spitfires. They maintained a steady speed of 25 knots. The aircraft were flown off 300 miles from Malta, an unforgettable sight, dad said, until one of the Spitfires had engine failure and fell straight into the sea over the bows and vanished without trace. 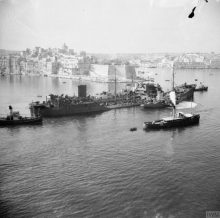 Three damaged merchant ships staggered into Malta’s Valletta Grand Harbour. By some miracle, the Ohio with its tanks carrying the essential aviation fuel followed at slow speed accompanied by the Brisbane Star. Malta could hold on for another few months.

When a gallant or meritorious action in the face of the enemy takes place, it is not unusual for the serviceman to be ‘mentioned in dispatches’ when a superior officer makes his official report.

Had my dad not caught the primed shell on Board Hms Eskimo, it would have blown up, killing him and others as well as seriously damaging the ship. Thanks to his action, the lieutenant in charge of the gunnery crew was duly mentioned in dispatches.

Not that it bothered dad. He was about to embark on the first of two Arctic convoys across the Norwegian Sea and Arctic Ocean from Loch Ewe in Scotland to Arkhangelsk in Russia – another chance to see the world.