THE HIDDEN HILLS OF CADAQUES 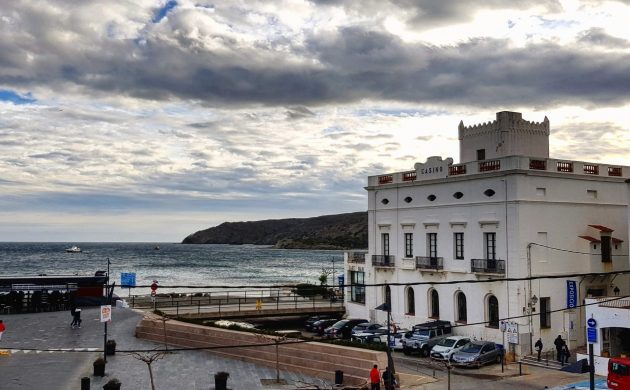 1984. Late spring. Armed with a hand-drawn map, a bag of figs and some tangerines, we set out to climb what our friend Eloy Ferrer had called the Hidden Hills of Cadaqués.

The journey by train from Barcelona to Figueres took two hours and two more over the Big Dipper of a road with the bus fishtailing around countless curves before descending into the village. There were barriers in the places they were least needed and gaping voids where erecting a barrier was essential but perilous to instal.

Valerie closed her eyes and meditated. I gazed down at the old cars like upside down beetles in the valley below, a reminder that if life is a journey, not the destination, there are exceptions to the rule. We arrived pale and queasy and understood why some people never return to Cadaqués and others never leave. 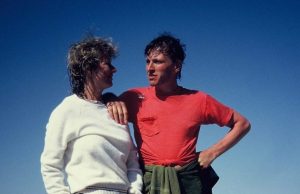 Walking in the hidden hills

We walked on shaky legs down Caritat Serinyana, the avenue of plane trees leading from the bus station to the waterfront. We turned right over an old stone bridge and had a late breakfast at the Casino. The bar with tall windows occupied the ground floor of a cube-shaped building with three floors above, two occupied by art galleries, the top floor holding a private collection rumoured to include a secret masterpiece by the enigmatic Marcel Duchamp. The French creator of Fountain and The Bride Stripped Bare by her Bachelor Brothers, Even (AKA: the Big Glass) had lived the last twenty years of his life in Cadaqués.

We ordered omelettes with pan con tomate, a staple of Catalan cuisine and identity consisting of bread with the pressed juice of tomatoes mixed with garlic and olive oil. I lit a Ducados – the taste of Spain – and gazed around the interior.

The walls were filled with paintings. The voice of the newsreader on television was turned low as if news of any sort might upset the bar’s equilibrium; it would be turned to full volume for football matches. A woman of an uncertain age in a kaftan fed coins into a fruit machine that buzzed and bleeped. Everyone made a fuss of the baby held in the arms of a girl when she entered the bar, the custom providing the infant with an innate sense of belonging, a self-confidence that was typically Spanish.

The Casino was a sanctuary, a stage set, a collective where working men played cards, artists carried portfolios, girls from Amsterdam fell in love with fishermen and the last bohemians sat in dark corners like Jean-Paul Sartre and Simone de Beauvoir plotting an existentialist revolution. The bar was busy from dawn until the church bells rang out at four minutes to midnight – the bellringer’s watch was always four minutes fast – and the habitués clung on like lengthening shadows as the night boats weighed anchor and the moon slipped below the horizon. If the Casino had a political leaning it was a blend of anarchist and surrealist.

The local council – the ayuntamiento – owns the Casino and sells the rights to run it every three years to the highest bidder. The first Casino opened in Madrid in 1836 as a social club, breaking with the tradition that such societies were exclusively for the recreation of the upper-classes. With a liberal philosophy and non-political bias, that became the model for Casinos to spring up all over Spain.

Simonets in the Hidden Hills of Cadaqués 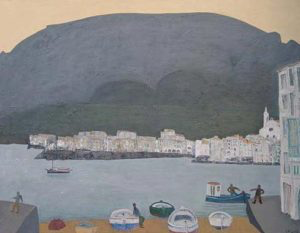 The slopes of El Pení by Koyama.

It was midday by the time we set off with Eloy’s map towards the lighthouse at Cala Nans. We left the sights and sounds of the village as we rounded the coast and began to climb Simonets, the remote face of El Pení, the grey mountain forming a barricade that looms over the village.

The mountainside is made up of a hard, needle-sharp lava like dragon skin, so desolate it felt as if we were at the beginning of time and we were the first people to make the ascent. There were no tracks or footpaths. In places, bluffs of rock hung over us like huge fists and we were obliged to take looping detours to continue the climb.

In clefts of rock, enough earth and dinosaur dust had accumulated for siemprevivas to plant their seeds. The yellow blooms are as bright as sunlight and ‘live forever’ when the plant is pulled up by its roots and hung to dry. Cactuses with raised arms stood about like traffic policemen and the only sign of sentient life was the tiny cannon balls of droppings left by goats in search of the elusive shrub càdecs, juniper in English.

We rested on a ledge below the summit. Our repast of figs and tangerines had the heavenly taste of the manna God provided the Israelites during their forty years wandering in the desert. With the mountains rising from the sea with tin plate coloured slopes and haloes of mist, it felt as if Cadaqués was an island disconnected from the rest of the world.

For centuries, the only way to arrive or to leave the village was by sea, heightening the sense of insularity and difference. The people speak Spanish with Catalan idioms and Catalan with the remnants of mediaeval words shared only with fishing communities on the Balearic Islands. In many small hamlets, foreigners are feared and unwelcome. Not Cadaqués. It is a melting pot, a coat of many colours. The streets are the walls of a film set and everyone is a star in their own movie.

From the ridge that tops the Pení, we were confronted by a military post with a forest of radio masts and two cement-coloured balls almost as high as the church, its appearance on the landscape like a rip in an oil painting.

The facility had been placed at Spain’s most easterly point as part of the early warning system in case of a nuclear attack from Soviet Russia and served the same purpose as the string of pillboxes and bunkers for anti-aircraft guns all along the Catalan coast. When Franco in the Second World War backed the Axis Powers – Germany, Italy and Japan – he feared an invasion from Allied forces. With his army of civil war prisoners press ganged as slave labourers, he constructed from 1939 until 1953 the Linea Gutierrez, the Spanish equivalent of the Maginot and Siegfried Lines. 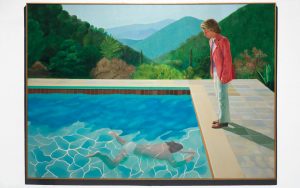 David Hockney, Portrait of an artist.

After more than two hours alone in this hushed primordial world, the military post brings you back to reality, which made the vision as we set out down the near side of the Pení all the more surreal. A mediaeval building stood in the fold of the hills, beside it, a shimmering swimming pool like a sapphire on the grey shale of the hillside. The juxtaposition of the pool below a blue sky surrounded by mountains was an almost exact replica of David Hockney’s Portrait of an Artist (Pool With Two Figures), a work he completed in 1971, by uncanny coincidence, the year he visited Cadaqués.

As we drew closer, defined by the crystal light, we saw what looked like a statue of a naked man from a Greek temple standing at the poolside. I thought poetically of Lord Byron who swam the four miles across the Hellespont, what today we call the Dardanelles, to join the Greeks fighting the Turks for independence. I was even more surprised when the figure stretched his arms to dive into the pool and the water divided in chevrons as he swam the length one way, turned and swam back again.

We lost sight of the building as the track twisted back on itself. When it came into view again, the path leading to the refuge was blocked by a short, sturdy woman with fists clenched as if ready for a fight. She looked every inch like a female conquistador and I understood how Hernán Cortés with five hundred and eight men and sixteen horses had vanquished the Aztec civilization. As we drew closer, I heard the sound of a ping pong ball cannoning across the table behind the closed door of what looked like the entrance to a chapel, the regular beat ceasing when a point was won, then starting again.

The guardian at the gate shook her head and cried out ‘No. No. Talaia. Talaia,’ the ancient word for lookout tower used as a warning that there were Moors on the coast. She pointed at a sign that read: Finca Particular – private property, and we turned back to continue our journey.

The unpretentious building was the hermitage of Sant Sebastian, built by Benedictine monks in 1486 as a retreat from Sant Pere de Rodes. Its position half hidden on the mountainside created an ambience that stayed rooted in my memory and I wondered if I would ever return.

As we trudged on down the hill, the village grew on our vision like a developing photograph. The round trip up and down the Pení had taken five hours – not three, as my mountain goat friend Eloy had predicted. We had to hurry the last leg along the avenue of plane trees to the bus station and could barely believe our eyes as we watched the last bus climb the curves out of the village.

When we joined the group of people who, like us, had arrived at the last minute at the bus station, it became clear that they were not victims of the bell ringer’s unreliable time piece and were unusually forgiving when the woman at the ticket counter explained that the driver’s wife had just given birth in Figueres and the driver wanted to see the new baby before visiting time ended at the hospital.

We spent the night at the Hotel Cabo de Creus and, like everything in Cadaqués, it has a dark, surreal history. It was called Fonda Miramar when it was built by local businessman Onofre Pont in 1904 – the year of Salvador Dalí’s birth. Celebrated names signed in the guest book include the poet Federico García Lorca, Picasso and Albert Einstein. At the outbreak of the Civil War in 1936, pro-Franco militias assassinated Onofre Pont and took possession of the building.

After the war, the new owner, the pharmacist Nieves Pont, changed the fonda’s name to Hotel Cabo de Creus, which it remained until 1994, when Dalí’s former secretary, Captain Peter Moore, became the proprietor, decked the building out in Dalí memorabilia and renamed it La Residencia.

The view from the window with the Casino to our right looked out over the grey sea marching into shore with white tips silvered in the moonlight. It was April 1984. Our son, Max, was born on 10 January 1985.

See – Moors on the Coast, Part 1, A Brief History of Cadaqués

Love Dalí, my book Sex, Surrealism, Dalí and Me is FREE on Amazon Kindle US, UK, Spain etc.

The post THE HIDDEN HILLS OF CADAQUES first appeared on Clifford Thurlow.

THE HIDDEN HILLS OF CADAQUES