Idioma: En
Blazing Minds - Voted As One Of The Best Uk Blogs
http://blazingminds.co.uk
Follow me
Share me

Movie Review: The Lair of the White Worm, Remastered for Blu-ray

Welcome to the bizarre world of The Lair of the White Worm and Ken Russell who is known for his flamboyant and controversial style filmmaking and this 1988 movie is no exception, including its moments of sexuality that is pure Russell.

The Lair of the White Worm is adapted from the Bram Stoker novel, the film released in 1988 features Hugh Grant and Peter Capaldi (Doctor Who) early in their film careers, it also stars Amanda Donohoe and Catherine Oxbridge in a strange horror mixed with that Russell style campy humour. 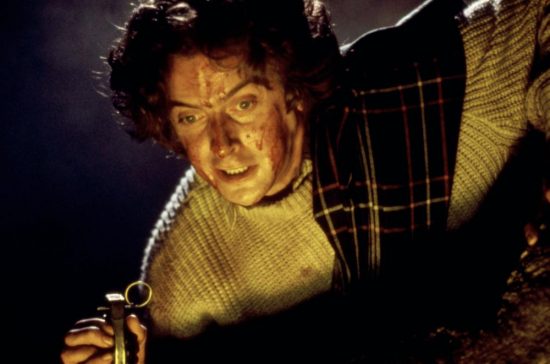 THE LAIR OF THE WHITE WORM, Peter Capaldi, 1988, (c)Vestron Pictures

James D’Ampton (played by Hugh Grant) returns to his country castle in England. It is said that Legend says that James’s distant ancestor once slayed the local dragon, a monstrous white worm with a fondness for the sweet flesh of virgins. D’Ampton dismisses the legend as folklore until archaeology student Angus Flint (played by Peter Capaldi) explores James’s property and unearths a massive reptilian skull and a pagan snake god’s ancient site of worship. When James’s virtuous girlfriend, Eve Trent (played by Catherine Oxenberg), suddenly disappears, James and Angus set out to investigate the foreboding cavern said to be the worm’s lair, where a centuries-old mystery begins to uncoil.

Lady Sylvia Marsh (played by Amanda Donohoe) is the sexual antagonist of The Lair of the White Worm, with moments of horror as she prays on her victims in rather sexual outfits and venomous fangs to suck the life from her victims!

THE LAIR OF THE WHITE WORM, Amanda Donohoe, 1988, (c)Vestron Pictures

As with most of Ken Russell’s films, he has put in many fetish style images through the film, this is not so much a horror, but more of a camp and fun movie of a time when movies were so much different than they are today, plus no one could ever make a film like Russell with phallic symbols thrown in for good measure and his thought on the Catholic church!

But this is a movie for Ken Russell fans, the restored and remastered version on Blu-ray does look good, the soundtrack is the original 2.0 stereo mix which sounds crisp and clear, the Vestron Video Collector’s Edition also comes packed with special features that take you deeper into The Lair of the White Worm.

The Lair of the White Worm Special Features

The post Movie Review: The Lair of the White Worm, Remastered for Blu-ray appeared first on Blazing Minds by Karen Woodham

Movie Review: The Lair of the White Worm, Remastered for Blu-ray