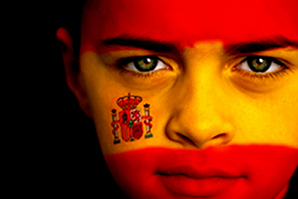 I've been teaching Spanish teenagers this past week. This was for want of other work, not the desire to educate the young generation: others are far better qualified to do this than I am. The colleague with whom I shared the classes is the mother of teenage kids and knows what tends to enthuse fourteen year-olds, how to react to their rapid alternation of reasonable and obnoxious, and how to impose discipline when necessary. The two lovely Spanish group leaders were likewise of maternal generation. They obviously love the kids and the kids love them back. Me, I felt a bit out of it. I last taught teens in 2005, did so reluctantly and never felt good at it. My classroom persona developed for a grown-up audience. He's quick-witted and funny, knows a little bit about a lot of things, and is able to combine these things to create an illusion of greater expertise on this and that than is actually the case. He asks the question 'why?' more often than any six year-old and I see him sometimes as a sort of budget Socrates but more often as P.T. Barnum. It would take longer than a week for me to learn to see through fourteen year-old eyes, and the course finished today.

Yesterday the kids were preparing poster presentations about London, in anticipation of their visit on Saturday. They had downloaded and printed photos of all the usual tourist sights, written short texts about them, and in a small room full of pens, scissors, pritt sticks, stacks of discarded sandwich wrappers and plastic bottles, eleven kids were assiduously cutting out their pictures and texts to make posters. On You Tube they played ad nauseam the irritatingly catchy moronic shite hereto appended, joining in the chorus:

This kiddie-pop they would alternate with patriotic military music and funereal Semana Santa marches. Standing amid this mess and racket, I felt I was slumming it until I saw how carefully most of the kids were making their posters, and what pains they took to design them well. I had asked the two Spanish group leaders to come in at the end of the lesson to give the posters a wider audience than just me, and the kids' pride in their work and need of our approval was palpable. I stopped feeling like a baby-sitter and realised I had been an educator after all.
Not all of the time, though. José is boisterous, noisy, disruptive, unfocused and was a pain in the arse for much of the week, alternating manic clowning with loud complaining:

The other kids thought he was a bloody good laugh, which encouraged him to be more like himself than ever, and half an hour before lunch he'd be bouncing off the walls. On Tuesday I tried working closely with him, sequencing and scaffolding and all that stuff, trying gently to bring him to heel a bit. I didn't manage it very well. At one point he shot out of his seat as if released by a spring, leapt across the room and tipped Elena out of her chair, the motivation presumably that it struck him as a wizard wheeze at the time. Then once again he was talking over me as I was trying to set up an activity and finally I fucking lost it. I roared 'SHUT UP!!!' at a decibel level that would have been audible three doors down the street. Well, it seemed to work. He apologised, calmed down, stopped pulling Aisha's plaits, and we proceeded relatively peacefully for the rest of the lesson. I thought sod the caring and sharing: let's reintroduce matutinal five mile runs, cold showers, fagging, detention and the tawse.

The group leaders contacted José's mother to inform her that he was driving us nuts and could she please advise. This is how we learned that he had been diagnosed with ADHD and had not been taking his medication. There was some odd back-story to this, a matter of his having been told that the pills were vitamins and he didn't think it necessary to take them. Or something.  Anyway, his mother said she would call him every morning to tell him to take his tablets. On Thursday he was a different kid, calm and biddable, or a least as calm and biddable as most fourteen year-old boys get. The teacher who was responsible for the social programme told me today that the effects of the medication were clearly wearing off by early evening. I am grateful that I was not expected to join the group for dinner at Pizza Express.

I worry a lot about teaching and spend a lot of time preparing for MA sessions and EAP classes. This past week was no less worrying, because I find teenagers so unpredictable. Something will seem to be going swimmingly, then one kid will suddenly turn sulky and down tools and the lesson will start to go down the shitter. Things I thought would work well would be glumly received and stuff I was afraid would bore them to death would fly. This morning at break my colleague said of José 'I think he's only taken half a pill this morning', and my heart sank: what was I going to do for ninety minutes with a group already in end-of-term mode and José like a wasp in a matchbox? Friday is market day here, with three streets of stalls. I cobbled together a swift task sheet: what vegetables and fruit can you see? Find one you don't know the word for and ask the owner what it is. Find a stall that sells Spanish produce: does the owner speak Spanish? Ask the bloke who sells samosas where he's from, (Pakistan) and what's in a samosa. Interview some people: do they come here every week? Do they live locally or drive in specially? ¡Vamonos!

It was the best 'lesson' of the week. The sun shone, the five kids talked happily to stall owners and passers by, had a natter in Spanish with the bloke who sells Spanish produce and were thoroughly delighted with the whole thing. The stall holders were all very good-humoured and the elderly people the kids button-holed were kind as grandparents. I should probably - no, certainly - have completed some lengthy form detailing every possible problem a teenager might encounter in broad daylight in a pedestrianised area of a small market town well-peopled mostly by pensioners, and what plans I had to troubleshoot and fire-fight, but sod it, I didn't, and we survived.

I posed for photos, wrote valedictory messages in notebooks, and left 'em laughing when I went. Now, just as souls are said to desire reincarnation, I feel the desire to go back and do it again, properly this time.