Teen Depression: Essential Signs & Ho…
Why I Chose to Be Vaccinated Against …
Why the BigCommerce and Walmart Partn…
First Sounds From Mars Captured By NA…

The Lotus-Eaters begin with Paula-Kai and Tanya-Greg sharing a good time. Kai gifts a necklace to Paula and asks her to be with him forever. But Paula tells him that she has to leave soon as she has college and her whole life ahead of her. Armond is in panic mode, and Shane saw him getting some of Dillon’s a** at the end of Episode 4.

It’s a new day at The White Lotus hotel that begins with drama. Mark and Nicole argue as the former told their son Quinn about his infidelity. Paula tells Olivia to keep the necklace in the safe and lies that her grandmother gave it. She hears the safe’s passcode and tells Kai that they all are going scuba diving and he can steal the money and live a better life.

Armond tries to cover up at the breakfast table and finally offers Shane and Rachel the Pineapple Suit. Shane doesn’t say anything but only has an evil smile as he looks at Armond. Tanya whines in front of Belinda again about how she’s afraid of letting Greg get to the ‘core of onion’ (her body) as she’s insecure he might get repulsed. Belinda consoles her nicely and also gives the business papers to Tanya. If you remember, Tanya suggested to Belinda that she should start her own spa business. Yet again, the white, wealthy lady is drowned in self-pity to pay attention to anything else.

There are two big twists in The White Lotus Episode 5, The Lotus-Eaters. When the Mossbachers and Paula get into the boat for scuba-diving, Mark and Nicole fight. They leave the boat and decide to head back to the room. Kai is stealing their belongings in their room, and while escaping, he hits Mark in the face. When the kids return, the cops are inspecting the room for fingerprints or any proof. Paula is distraught as her planning landed Kai in trouble.

At the swimming pool, Shane’s mother, Kitty, tells Rachel how she keeps her son happy. Kitty also tells Rachel that she’s lucky to have made her place in his life after many girls failed to do so. A confused Rachel asks Kitty if she’s calling her a trophy wife, to which her mother-in-law responds, ‘What’s so wrong about that?’ Rachel’s expressions tell us that she’s regretting marrying Shane and getting into a rich family.

It’s nighttime, and Belinda and Tanya are having dinner. Tanya says she was too distracted to read Belinda’s business proposal. Tanya also leaves the resort’s spa manager in the middle of their dinner when she gets a text from Greg. The Mossbachers have dinner, and Armond apologises to them for the robbery incident. The manager informs them that their stay is comped by the hotel. 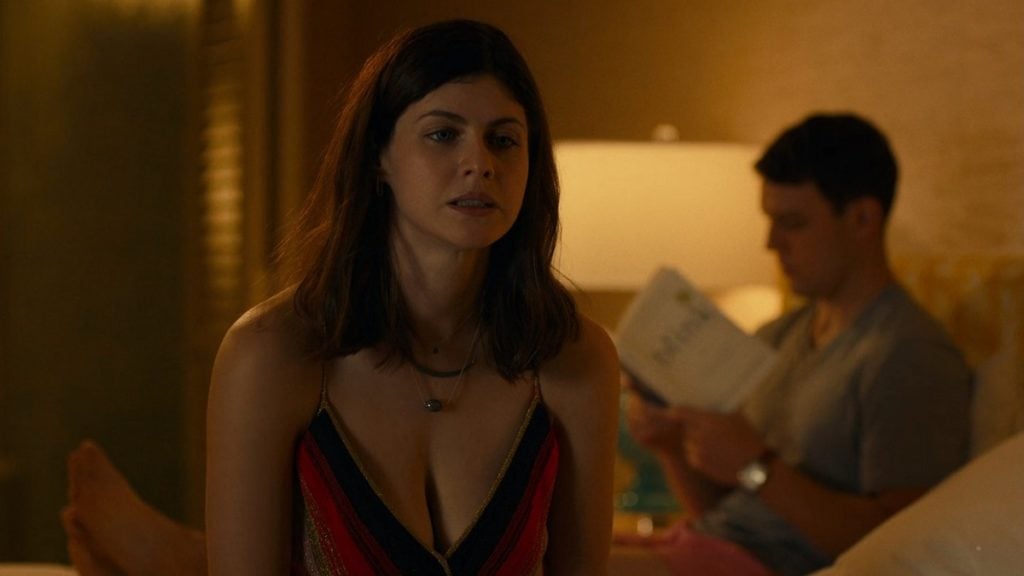 The White Lotus Episode 5 Recap: Still from the series

The White Lotus Episode 5 ends with Tanya pushing Greg away and telling him that she’s difficult and insecure. Greg says, ‘I still wanna f*ck you,’ and they get into action. Kitty’s stay ends at the hotel, who tells Rachel while leaving to be ‘happy’. In their room, Rachel says to herself, ‘I’ve made a terrible mistake’, hinting at her decision of marrying Shane. Olivia raises suspicion towards Paula and says that isn’t it weird how her necklace got stolen an hour after she asked her to keep it in the safe.

Armond and Belinda sit together at the dinner table as they discuss The White Lotus guests. He expresses his disgust towards the Lotus-Eaters and says, ‘Sometimes just watching them eat every night makes me want to gouge my eyes out’.

The White Lotus Episode 5 Recap: Is it worth watching?

The latest episode is making me doubt if someone actually got murdered in the series or not. Did Shane lie to the couple out of frustration because Rachel decides to leave him? Whatever it is, the drama has gotten exciting. Also, how stupid of Paula to put Kai in trouble when she could’ve walked out of the boat too by giving some excuse, as she did at the dinner table once! The last episode is releasing next week, and I can’t wait to see how the wealthy people’s drama ends.

The White Lotus Episode 5 is currently streaming on Disney+ Hotstar.

This post first appeared on Leisure Byte, please read the originial post: here
People also like
Teen Depression: Essential Signs & How Parents Can Help
Why I Chose to Be Vaccinated Against COVID-19
Why the BigCommerce and Walmart Partnership Is a Big Deal
First Sounds From Mars Captured By NASA Rover