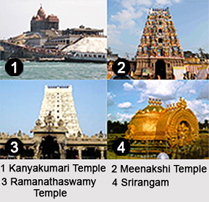 Tamil Nadu is home to many popular places of interest. The tourism industry of Tamil Nadu is the second largest in India, with an annual growth rate of 16 percent. People from across the globe come here to see the temples with their exquisite Dravidian architecture, hill stations, and the heritage sites.

Tamil Nadu Tourism Development Corporation promotes tourism in the state as Enchanting Tamil Nadu. This state is a place of varied beauty. Tamil Nadu has a long tradition of venerable culture. The most visible legacy of this protracted cultural flowering is a crop of astounding temples, whose gigantic gateway towers, or gopurams, still soar above just about every town large enough to merit a railway station.

Pilgrimage Tourism in Tamil Nadu
No Indian state is more dominated by its temples than Tamil Nadu where temple architecture catalogues the tastes of successive dynasties and testifies to the centrality of religion in everyday life. It is also known as the land of temples. The multiplicity in culture and religious performances in Tamil Nadu has led to setting up of several places of worship, which belongs to the followers of diverse religions. Since the Hindus exceed in population their places of worship temples dot the whole landscape. Most temples are built in honour of Lord Shiva, Lord Vishnu and their consorts; all are characterised not only by their design and sculptures but also by constant activity, devotion, dancing, singing, puja, festivals and feasts. Each is tended by Brahmin priests, recognisable by their dhotis, a sacred thread draped over the right shoulder, and marks on the forehead. The Kanyakumari temple of Tamil Nadu is an important center for pilgrimage for years. The Meenakshi temple complex in Madurai in Tamil Nadu is one of the largest in India and the presiding deity at the Meenakshi temple is Goddess Meenakshi. The Ramanathaswamy Temple is one of the most sacred shrines of the Hindus in India and is considered as holy as Varanasi. Pilgrims from all over the world come to pay homage to the deity. The inhabitants of Tamil Nadu also include Muslims, Jews, Jains and Sikhs. A number of Mosques, Synagogues, and Gurudwaras represent the sentiments of their respective religions. Of all the worship places, temples are the oldest. Tamil Nadu was also influenced by Christianity during the Portuguese and British invasions. Hence the travellers will also come across a number of churches. 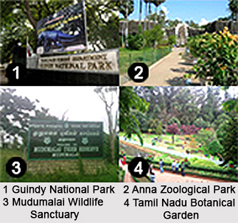 Nature Tourism in Tamil Nadu
There are several wildlife parks and gardens in Tamil Nadu that make it an interesting spot for the nature lovers. A state that is blessed by so many gods and goddesses is also bound to be blessed by nature’s bounty. Its major wildlife sanctuaries Madumalai and Annamalai are located in the Western Ghats. The hills here provide a safe shelter for elephants, bisons, deer, monkeys and, of course, tigers. The forests here are filled with plants with medicinal value. Guindy National Park, in Chennai is a major attraction for all true wildlife enthusiasts. This park is located within the city and it has a few populations of animals. Arignar Anna Zoological Park of Tamil Nadu which is also known as the Vandalur Zoo was the first public zoo in India. It is a home to more than one hundred and seventy species of mammals, birds and reptiles. The Botanical Garden of the state is an ecstasy for bird watchers where a wide array of birds, both seasonal and year-round residents, can be sighted. The Madumalai National Park is the first wild life sanctuary of south India. Elephant safari and Jungle safari are arranged for interested tourists.

For more visit the page: https://www.indianetzone.com/26/tamil_nadu_tourism.htm