Well I don't write the songs but I am about to feature some people who did. And yes I stole the (song) title from Captain & Tennille's "I Write the Songs" written by Beach Boy Bruce Johnson and popularized by Barry Manilow. I have talked about many singer songwriters like Bob Dylan, Joni Mitchell and Taylor Swift who are famous for writing their own songs. We know Stevie Wonder writes most of his own songs and for other artists, then there are the Springsteens and Madonna's of the world not to mention the iconic duo of Lennon and McCartney. But these artists are all known for their singing and/or instrumental talents. So today I am focusing on people who may have all these talents and more but are primarily known for songwriting.

Many will be familiar names that I have referenced in the past, some perhaps less so but at least their songs are very well known. As I am wont to do I am going to go back in time and take a bit of a chronological approach. For today I will talk about songwriters that may have had a certain niche or style as there really were not any genre to speak of 100 years ago. Much of the popular music that was not folk/church/gospel came from plays and musicals. What is great about words and music is that when they are written down (or even when they are not) they become open to another creative artist to make changes. Perhaps subtle, or when recorded with a change in perspective the song takes on a very different interpretation and sometimes it seems almost brand new.

I can't discuss all the great songwriters and most certainly not even a representative short list in one post. I won't talk about the Classical greats like Mozart, Beethoven or Bach but will stick for the most part to the English speaking Western World such as the "The Great American Songbook" which is so very well known internationally. Other genre developed of course such as Classic R&B, Blues, Rock, Country and Popular music in general. As much as I recognize the talents in Hip Hop and current R&B styles I won't be going there at all. Almost exclusively the great Jazz composers were all performers, like Miles Davis, Dave Brubeck and John Coltrane for example.

Just Google "greatest songwriters" and you will get plenty of lists. Prominent is the 'Rolling Stone Magazine's 100 Greatest Songwriters of All Time' which contains many of the recording artists I've blogged and more. While they do have some writers known primarily just as songwriters and not performers, the list is still very Pop and Rock recording artist focused. Which is fine as that's their audience but if you are going to title it that way perhaps a bit more research that might therefore include more deserving writers, at least to be included in the top 100. My point is if you are going to call it "Greatest Songwriters of All Time" than that's what it should be as great writing 'lists' should not be reduced to a recent popularity contest. If they titled it "100 Greatest Popular Songwriters since 1950" or something then it makes more sense. There are other lists I found omitting many worthy names as well. So instead of rambling about who or what I don't like I will just get too it!

Here is my 'List' of Songwriters (words and/music) known primarily for their writing. Firstly a recognition of some heritage, then the writers of the 'Standards' we all know and then as mentioned to the more contemporary in Part 2. None of these names of course appear on the Rolling Stone Magazine list and interestingly some of them are absent from other 'Greatest' writers lists as well.

Stephen Foster (born July 4, 1826 and died January 13, 1864) is referred to as "The Father of American Music" which is fitting when you look at the songs he penned in his all too short life. Over 50 works such as "Beautiful Dreamer", "Gwine to Run All Night, or De Camptown Races" better known just as "Camptown Races", "Oh! Susanna", "Old Folks at Home" better known as "Swanee River", "Jeanie with the Light Brown Hair" and the anti Slavery song "My Old Kentucky Home" (must listen-Linkin' Bridge are amazing) and there are a dozen others I could list that you would recognize but this will give you a good idea as to how important a songwriter he was.

Carrie Jacobs-Bond ( born August 11, 1862, died December 28, 1946) who I mentioned in the "Get the Message" post was a prolific writer. While she (unlike Stephen Foster) was also known as a good singer she is primarily remembered for writing some 175 songs. "I Love You Truly" , "Perfect Day" and "Just Awearyin' for You" are her most popular songs, she was a tireless worker composing her last song at age 84. Selling over 25 million copies of her manuscript of "I Love You Truly" she reportedly made over one million dollars in royalty payments by 1910 at age 48. Why so much money? She was a very smart person, making sure she copyrighted all her songs in her own name and did not sell her songs to anyone and maintained a much more than usual control over who initially recorded her music.

The next group, quite obvious when you read the song titles are the writers that are the 'major' contributors to "The Great American Songbook". An unfortunate reality and obvious by omission are women songwriters, however many of the songs were made famous by female performers. A little history, Rebecca Clark was the first woman to be enrolled in The Royal Conservatory of Music in 1907 for a course in Composition but she was forced to withdraw as her father banished her from their home. Her compositions for the Viola however would go on to some acclaim. Ethel Smyth composed her "March of the Women" among other works and later went to prison for supporting Women's Suffrage in 1912. Notables such as Marian Anderson would be denied a music education because she was black, yet would not only write music but in 1925 performed with the New York Philharmonic and then at Carnegie Hall in 1928. Others would have fleeting success but most had a very tough time and are not well remembered by the general public. Not that women hadn't the talents or ability to compose it was because they were not given the opportunity. This imbalance started to correct itself a bit by the 1950's and is even more evident today, though not exclusively but all genders flourish in the singer/songwriter category. So for better or worse it's the all male world of music composition up to the first half of the Twentieth Century. In no particular order here the well known composers and lyricists, often identified with their most frequent writing partners.


Aaron Copland (November 14, 1900 – December 2, 1990) is referred to as the "Dean of American Composers", and he wrote "Fanfare For The Common Man" among numerous other amazing pieces. I know I said I wasn't going the 'Classical' music direction but his influence spanned far beyond ballets and orchestral works. This largely self taught genius made an impression on the American Prog Rock trio of 'Emerson, Lake & Palmer' who recorded an adaptation of "Fanfare for the Common Man" in 1977. Just listen to their signature song from 1970 "Lucky Man". They are not the only rock band to be influenced by Copland.

Richard Rodgers (June 28, 1902 – December 30, 1979) was a brilliant composer and for a while he teamed up for a somewhat dysfunctional yet fruitful time with lyricist Lorenz Hart (May 2, 1895 – November 22, 1943). "Blue Moon", "This Can't Be Love" and "Manhattan" to name a few. When Hart's reliability and health started to decline, Rodgers turned to lyricist Oscar Hammerstein (July 12, 1895 – August 23, 1960) and they produced all the music for the iconic "Oklahoma", with "Oh, What a Beautiful Mornin'" and then "Some Enchanted Evening" from 'South Pacific' and 'The Sound of Music' with "Do-Re-Mi" and "My Favorite Things". After Paul McCartney and John Lennon, at nearly 12,000 versions Rogers is the most recorded songwriter of all time. 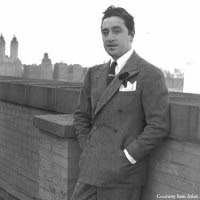 Harold Arlen (February 15, 1905 – April 23, 1986) if you don't immediately recognize the name, he composed the Music for "Over the Rainbow" with the lyrics written by the great Yip Harburg. This composer of over 500 songs apparently had me so transfixed while listening to a retrospective of his work in my car one day that my friends Shayne and Sheila drove past me waving and honking their car horn and I didn't even know they were there. Yes I arrived quite safely at my destination. The next day, Shayne "did you not see us?" Me "no idea you were there", Shayne "we figured you were listening to some of your weird music!". Ok if weird is "I've Got the World on a String", "Stormy Weather", "Let's Fall in Love" all lyrics by Ted Koehler or "That Old Black Magic"- lyrics by Johnny Mercer, then hey I guess I'm weird.

Cole Porter (June 9, 1891 – October 15, 1964) was born into privilege and studied to be a lawyer. He had other ideas and wrote 300 songs while at Yale and when at Harvard Law he soon switched to the vocation of Music. Gifted in both composition and with a rye wit for lyrics he produced dozens of memorable songs; "All of You", "Anything Goes", "Begin the Beguine", "Ev'ry Time We Say Goodbye" and "Night and Day" for some examples. Collectively his songs have been recorded about 10,000 times.

Duke Ellington (April 29, 1899 – May 24, 1974) was a pianist and a band leader, but his lasting legacy is the songs he wrote and co-wrote. Growing up in New York City he started to thrive at The Cotton Club in Harlem. "Anatomy of a Murder" the soundtrack for the movie, "Caravan" (that's Juan on the valve trombone) which is the most covered song from 1936 at over 700 versions to date, co-written with his band member Juan Tizol. Then there's "Satin Doll" written with frequent collaborator Billy Strayhorn in 1953. His songs have been recorded over 8,200 times. 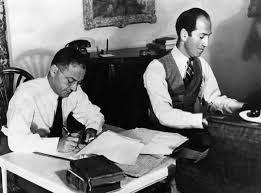 These two placed an indelible mark on Broadway with tunes such as; "A Foggy Day", "But Not for Me", "Embraceable You" covered by Tina Louise (1957) from Gilligan's Island!, "How Long Has This Been Going On?" by the amazing Holly Cole and I could go on but I will end with " 'S Wonderful " and a cover by the S'marvelous Diana Krall.
I know I hinted that I was winding things up with my blog, but there are a few more posts that I have to get out of my system!
References; https://www.wikipedia.org/, https://secondhandsongs.com/,  https://www.oxfordmusiconline.com/page/women-in-music-timeline, https://www.rollingstone.com/interactive/lists-100-greatest-songwriters/, https://www.npr.org/sections/therecord/2015/08/24/433206610/the-one-real-problem-with-rolling-stones-greatest-Songwriters-of-all-time
If you like my blog, please consider filling in the follow by email link at the top right hand of the page. Remember to confirm the subscription when you get the first email. Confidentiality is assured unless you are a close friend or family member then all bets are off. While I can compile data from my blog it's not tracking in terms of anyone's identity. For past blog posts click on the menu at the top right corner. Pass it along to a friend who might enjoy it as well or post it to your timeline on FB or other social media. And many thanks as always for reading my blog!